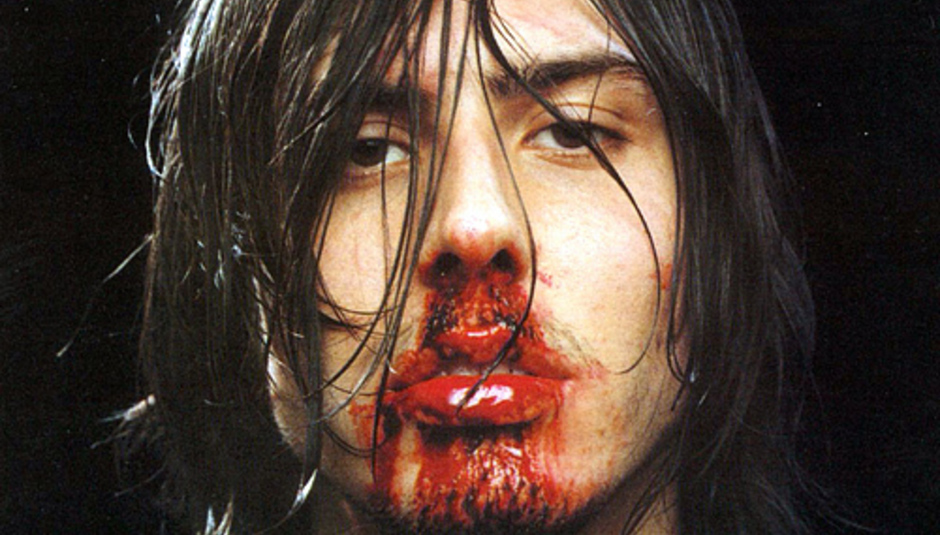 I had hoped to begin this by wishing everyone a happy new year, but unfortunately it's taken me a few too many weeks to make a start and have therefore missed my window and crossed into the "it's February, it's just weird to say happy new year now" territory. But, as luck would have it, yesterday was the Chinese New Year, so let's run with that and pretend like the delay was intentional. It seems that 2010 is the year of the Golden Tiger, which is much better than a rat or pig if you ask me. I don't know a whole lot about tigers, or even Chinese new year, so here's what I know about Big Scary Monsters in 2010...

Probably not literally. I'm turning the big two-seven this year and although meaningless in name, my body does appear to be showing signs of wilting and I'm finding myself more and more commonly choosing to live vicariously through others, none more so than Mr Andrew W.K. So kicking off the year with a limited edition, square-shaped 7" single from the Dancing King seemed entirely apt.

This is a release which has been in the planning stages for a couple of years now (I'll save the drunken story of how it all came about for another day) whilst we both tried to find a gap in our schedules to to fit the four-sided single - round holes, and all that - but even when that moment came, things still didn't follow the 'usual' record label routine. You see, to cut a 7" square out of vinyl, you need to start with a 12" record. These, as you can imagine, are vastly more expensive to press than their smaller siblings. How does a little independent label justify such luxuries for a three track single? Simple, you enter the Fantasy Football league organised by your vinyl manufacturer, pick a team of winners, finish 2nd at Christmas and cash in your prize to offset the extra costs. Probably not a tactic oft-employed by EMI, but then again, which one of us is £1.7bn in the hole? (ooooh, sick burn! Soz, Guy) 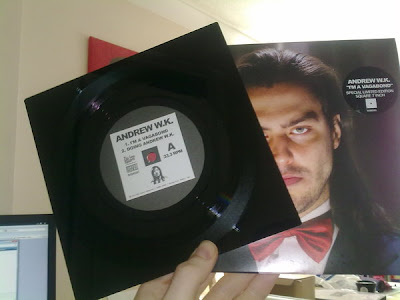 From our first curry (and subsequent puking) in London to shopping for Michael Jackson trading cards in Times Square, I've learnt a lot about the man and am still constantly surprised by his incredible range of skills, be it classical piano, TV presenting, motivational speeches or bizarre facial expressions. Love him or hate him, perplexed by the identity rumours or simply nonplussed by any of his work; for me, Andrew W.K. is one of the most important cult celebrities of this century.

For this reason, one thing I've really struggled with during the short AWK campaign is having to chase or tell Andrew off. I mean, who the heck do I think I am?! The same problems affect me with another of our new artists, a certain Mr Walter Schreifels, or Wally, as he'd probably hate me calling him.

A man with a musical CV boasting some of - if not all of - the most influential bands from the New York punk scene. Gorilla Biscuits, Youth of Today, CIV, Quicksand and more. This is a guy who has done more for music in 20 years than most could ever dream of and, just ahead of his 40th birthday and the very highly anticipated new Rival Schools album, finds his mailbox full on a daily basis with emails from some little prick in Oxford saying "we really need those photos today" and "any news on that artwork?". With his debut solo album set for release in early April, and a two week solo tour of the UK just before it, I fear for the poor man's sanity, not to mention patience.

Someone with very few demands is Mr Tobias Hayes. The former Meet Me In St Louis vocalist and Shield Your Eyes bassist who is never happier than when meeting strangers, sleeping on sofas and heading off into the night with nothing but his guitar and hat, has released three solo albums in the past year using the most DIY of methods. We're talking recording in his bedroom, touring on the Megabus, burning, printing and selling CDs with his own bare (or should that be bear? I mean, c'mon, the dude's hairy!) hands. As I think back over the year so far, I'm not sure if a single day has passed without one of us suggesting some new - and mostly, ridiculous - idea to the other. With the fourth album written and ready to record, a free EP of cover songs about to be mastered, a book half-written, a film project coming to close to conception, numerous new musical projects in discussion and so much more, ideas are like Dalmatians for Shoes And Socks Off. Just another singer-songwriter, he most certainly isn't, a very busy man with a beard to marvel at, he definitely is.

One of my favourite memories of Toby ties nicely in with another big event coming up this year. During the first ever BSM 5-a-side football tournament, as Meet Me In St Louis saw goal after goal smashed past them by the hosts, Team BSM, I ran (well, walked) by Toby, bent double in the centre circle, uncontrollably laughing. "What's up?" I asked nervously, trying to subtly cover my milk-bottle white legs. "I just kicked the ball the wrong way again and you guys scored." I guess you had to be there, but it's this kind of sporting ineptitude which brings me the most joy at the annual event each summer, as some 150 band members and music industry types get together to battle it out for a small and ultimately disappointing trophy, all feeling confident based upon the same, simple statement: "Well I was good when I was 12."

This years tournament will be the fourth and with the reigning champions, Fear And Records (featuring more than one ex-DiS scribe in their ranks) fancying their chances of being the first side to retain the cup, competition is bound to be stiff. Now if only I could find some team members who still possessed the abilities they had when 12 years old. Alternatively, I could just recruit some 12 year olds...

Ok, that's a bit harsh, but when working with a band who had to turn down tours just a few months ago because they were in the middle of their a-levels, and refer to the oldest member (who is still 4 years younger than me) as the "old man", my bitterness can't help but take these opportunities to put the boot in. Seriously... born in the 90's?!

This is a big year for Talons. The 6-piece instrumentalists have won themselves many new fans of late, enjoying a packed out free tour in January before supporting Johnny Foreigner around the UK in February, their next engagement is a number of dates with the wonderful Three Trapped Tigers in April, before releasing two more split singles (the first of which is with Chicago math-rockers Noumenon) and recording their debut album, all before they even think about heading off to uni in September. Expectations are high, no student pun intended.

So that's how we start our year. A square-shaped 7", a seminal punk, a bearded man with 101 ideas, a football tournament full of unfit music snobs and a band I will one day resent for being so bloody young. And that doesn't even touch on the 52-part singles club, the group from Falmouth, a place so far away it seems to take 6 hours+ to reach, no matter where in the UK you begin your trip; a bunch of Brummies who toured with Glassjaw, one of my all-time favourite bands who, whilst standing next to at the side of the stage, I simply greeted with a raise of the eyebrows (good work, Kev), and another bunch of Brummies who are currently driving all over Europe with Biffy Clyro, hopefully not showing them the tour photo I saw last week. Bands, eh?