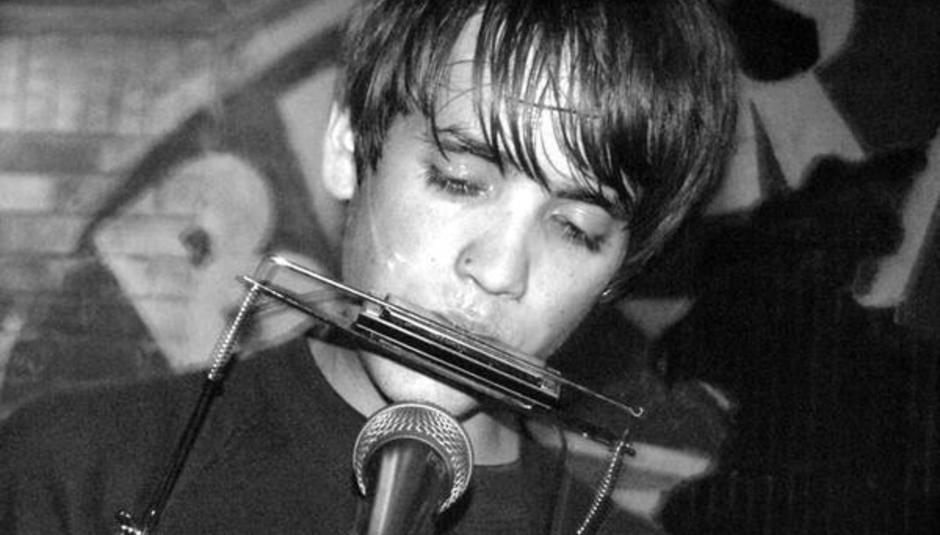 I will hadmit that this week there is quite a lot of nearly-but-not-quite singling going on - and that is Indie's fault, not mine. It is also absolutely nothing to do with how bad mooded I am today, having been LOCKED OUT OF MY OWN HOUSE. Luckily The Strange Boys manage to rise above the dirge with their messy old thing of a seven and make it alright again. Thank heavens for boys. Austin Texas' Strange Boys quote Steinbeck and Montaigne on their MySpace - and obviously this doesn’t automatically make them interesting because for all we know, they might loll around lazily reading The 'Flipping' Alchemist or The Life of Cacking Pi or 500 Years of SPARE ME THE BORING to each other. And then they might have the sheer temerity to tell you to read it, when IN ACTUAL FACT IT IS THE ONLY FACKIN BOOK THEY EVER READ AND THEY PROBABLY BRUNGED IT FROM HAITCH EM FACKIN VEE. Lucky for we, such speculation and rank literature-based snobbery does not stop The Strange Boys from making squally rock that owes a debt to a hundred garage bands – not that I care, and nor should you. A lovely, lovely noisy racket of a single, what you can hear here.

This has some lovely crunchy distorted bits on the chorus, but it is odd/vexing how one cannot really discern the sheer, unimpeachable loveliness of Robyn on it - even when one is straining very hard because one likes her absolutely loads; would almost definitely give her my last Lindor, were my hand to reach the bottom of the box and find just one ball of deliciousness left. Almost – because of course, those Master Chocolatiers know what they are doing, and how to make the insides go all squishy at exactly the spooky moment you want them to break into squishy in your gob. I don’t think I’d give I Blame Coco a Lindor though – not least because this has a pointlessly rude swear near the beginning that feels as if it is thrown in to make this record edgy. It doesn’t make it feel edgy though, it makes it feel naff. And all-a-sudden I am reminded of my Maw and Paw when I bought them tickets to see The Mighty Boosh and back they came saying ‘Yes, it wor great, Wendy. You are definitely our favourite. But they didn’t need to swear quite so much, they are cleverer than that.’ And I had half a mind on agreeing with them - at least until I wrote the above review of Strange Boys - even though, of course, that review just happened in the now - and what I am recounting is very much from the past. And of course, then I remembered my familial stereotype – and how, because I am the youngest, I am really quite insufferable. And this means that even when I am seventy I shall still have that lovely white card that gives me permission to strop the living shit out of any given situation; rolling my eyes like a bored slattern as I do. Some advice for you readers - don’t ever never go out with A Youngest, we are trouble in heels (but mostly trainaz). Listen here.

Unfortunately for The Maccabees, I was not a fan of 'Empty Vessels' even before Roots Manuva slapped a rather tedious bit of ‘will-this-do’ (c)rappery over the top of it. I say this as someone who likes Roots Manuva, an awl – though one cannot help wondering if he would have put his vocals on a middling indie record from a middling indie band five years ago. He is still the genius what done ‘Witness The Fitness’ though, so we will give him a bye to the next round and will never speak of this single again, unless we are in the pub and someone mentions it when Roots goes to the bog. And then we will say 'Oh no, we were talking about growing our own vegetables,' when he comes back from his 'wazz'. More here.

I am feeling amenable towards Victorian English Gentleman’s Club, partly because they allow girls in their cru. And because, as always, (cuh-am-I-right? etc) The Girls are doing AWL THE BLAHDY WORK on this single. I mean, at the very least, they are doing the best bits, by making up a backing track of endlessly repeated la-la-la's that are part-vocal, part-percussion - and the overall air is that despite the boringness of Belgium, these Victorians make good party out of crap country. Even though I am told this record is actually about suicide. Sorry Belgium, because I do like your choclits, and I believe you are also good at lace.

You know, I wanted to really and truly love Monsters Build Mean Robots - because of course, monsters really would build mean robots – both in the sense that they would build thoroughly dastardly ones, and also in the sense New Yorkers might use ‘mean’, when they mean it to mean good. But ‘Psalm 57’ (dedicated in the real, actual Good Book - I have one in front of me - to ‘chief Musician, Altaschith, when he fled from Saul in the cave’), though to all intents and purposes soaring and uplifting and urgent, moves me not one bit - not even when it does that building and dashing, accordion-accompanied, going-down-a-hill-in-a-barrel thing. Remember that it is now seven years since a particular band of clever coves from Montreal made everyone’s knees go weak with their ramshacklability and soaringness. And you know, it might just be me, but I think I’ve had enough now, I want to see some restraint. Or at the very least, a tiny bit of ‘Hm, now should we?’ before anyone pushes the button marked QUIET/LOUD. Or uses a bloody accordion, unless they really do have some sort of Eastern European roots – and if they do, I want to see the documents to prove it.

First, I want someone to tell me what exactly The Mens mean when they kindly offer to ‘break you off’. I mean, one is honestly not being deliberately naïve - and I can see very well how it is meant to sound vaguely threatening as some sex parlance does; and how often the very threat of how-much-pleasure-one-is-being-promised, is precisely why sexy tawk is so very thrilling. I just want to ask the question; break off what, and how? Because surely it is the sort of menacingly saucy thing it might be better for a girl to say, if one really does think about it [think about it now, won't you]. Anyway, impossibly shiny and [dread word] 'tight' rockers Far have done a take on Pony - with all the riding and saddle-soreness of the original largely intact, and what do you know, I actually found myself sort of, kind of, nearly, almost, [ALRIGHT YES I DID LIKE IT AND I DID PLAY IT AT LEAST TWICE BUT THAT DOESN'T MEAN I LIKE FAR OR ROCK] although to be fair, dEbruit's re-rub of the same tune is in a different league altogether, doing some frankly disgusting slash incredibly provoking things with a vocoder at about 01:37 in. More on Far here, although as I say WARNING: because they really are rock.

I would love to tell you here what Our Esteemed Editor said about Uffie when this flopped onto our respective stereos. But it is probably enough to simply say that he was quite giddy – and for me not to reveal exactly how worryingly and wearisomely scatological we had gotten, by the time the email had pinged back and forth several times – with both masturbatory and incontinence metaphors used to describe the Things We Were Listening To And Liking. As for Uffie, I have to say I am mildly worrying about her, because I am sure she missed her shouty train when it left the station 3 years ago. And really, were you in the market for something deliberately annoying and amazingly rubbish and gloriously offensive on the ears, I should be much more inclined to revisit this - a very much more ‘raw’, ‘dirty’, ‘hot’, ‘track’.

Swanton Bombs don’t want Viktoria [that is not how you spell it, and it is like me calling myself ‘Wendi’ – i.e. annoying and pointless. And I bet that it is not what’s written on imaginary Victoria’s imaginary birth certificate, either. This bit, in case you are wondering, is also annoying and pointless, for which I sort of, but don’t quite apologise.] ANYWAY as I was saying, Swanton Bombs do not want Viktoria, because they want a rambling house in the south of France, where they might record 18 songs while off their tits on incredible wine and heady cheese and where they would probably run themselves utterly quite ragged on other, much more naughty things. I AM SAYING THIS IS A BIT LIKE EXILE ON MAIN STREET, YOU SEE. All in all, it is a 'quite like, cannot love'. More here

Egyptian Hip Hop sounds like it was scrawled in fat black marker on a piece of card, to delineate between one bit of obscuro vinyl and another. In the sort of shop where withering glances are likely to be the order of the day, and you might not be allowed to enter before passing some sort of rudimentary (except not) twitty genre test. And you’d get paid in pride for working there - for what need had you of money, when you had all the hideous superiority that stems from knowing all the tiny indexes that must be applied to musical styles TO CREATE ORDER. And of course, you might think that this is what a love of music means, because it couldn't possibly just mean playing records and rather enjoying them. [If you know where I am going with this, do send me a postcard]. As for ‘Wild Human Child’, it does so very much want to be ‘Hello? Is This Thing On?’ from Louden Up Now – and well it might, for if I were a punk funk song, that is definitely the one I would want to be. And it’s not that it’s not good, it’s just that by unhappy coincidence, I have been listening to Louden Up Now this past week, and I cannot get over how magnificent it was and is; it won't be topped. More here.

Lucky Soul are lucky, because their lead singa sounds quite a bit like Sarah Cracknell of The Et. And ‘White Russian Doll’ swings along sounding like nothing so much as a sunshine yellow, gingham tablecloth laden with pwitty cakes. The trouble is, what I want today is steak, and I shall have it rare; bleeding all over my tablecloth so all the white squares have red on them.