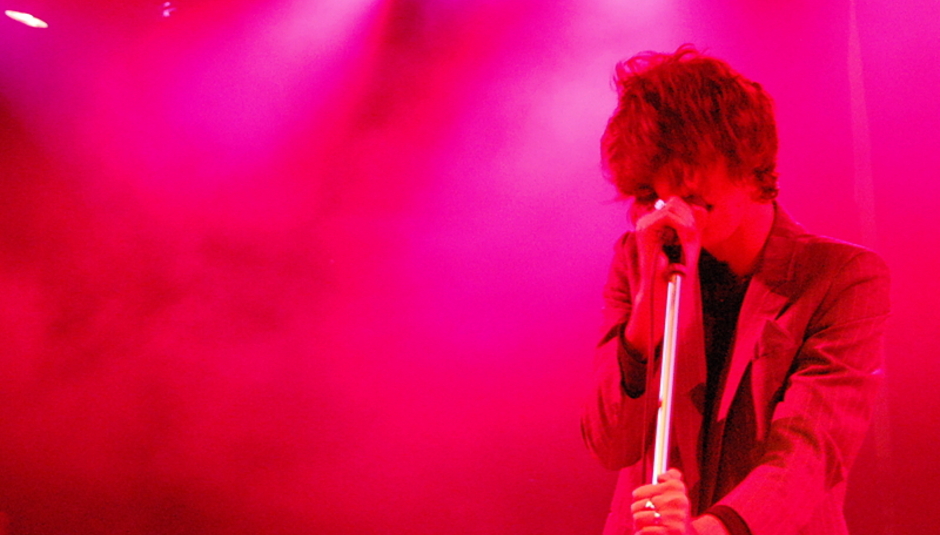 The Tyde sound kind of like Fleetwood Mac interpreted by Modest Mouse, and are surely the most flagrantly Californian people to have ever existed – the singer is wearing denim cutoffs, FFS. Still, their full-bodied sunniness clears away that early afternoon hangover nicely. Sun Ra Arkestra squall and squeal and finally find a groove which they cheerily refuse to abandon. Twinkly stars illuminate every surface, a very old man does some backflips, their version of ‘Nuclear War’ edges out the Hobokeners’; everyone’s a winner. (AL) To say we're in a buoyant mood would be an understatement. With reports coming in that a certain football team close to my heart has just completed a devastating win over their local rivals, nothing can spoil this afternoon. However, what we weren't expecting was for it to actually get better x100. When John Robb takes to the stage and quips that more people are here today than ever came to see his band twenty years ago, it seems to spur The Membranes into delivering the performance of their lives. 'Tatty Seaside Town' and 'Everything's Brilliant' fly by deliriously, Robb flitting between stage and front row with gay abandon whilst dedicating songs to anyone who's ever been to his hometown of Blackpool. Although their guttural, primitive punk rock is perhaps slightly out of kilter with your typical ATP fare, they're something of a revelation which culminates in Robb imploring all and sundry to "break a record" by creating the first ever moshpit at ATP, to which 50-60 punters of all ages, shapes and sizes duly oblige. (DG)

Although it would have been nice to have heard more from their Creation Records era, The Pastels prove something of a welcome antidote to the deluge of noise engulfing this year's festival. 'Basement Scam' from 1995's Mobile Safari and 'The Viaduct' from its successor Illuminations are particular highlights, while the opening chords of early single 'Baby Honey' send the Pavillion into raptures. A very pleasant interlude, or the calm before the storm... (DG) While the too cool for school brigade stand around scratching their beards, regaling in horror at what the next band are doing here, the rest of us gathered here know that this could potentially end up being one of the highlights of the weekend. Make no mistake about it, The Horrors have created one of the most astounding records of the last five years with Primary Colours, and from the opening salvo of 'Mirror's Image' and 'Three Decades', there's no letting up. 'Who Can Say' brings the indie disco to ATP, 'Whole New Way' sounds like Gary Numan covering Joy Division, while the closing 'Sea Within A Sea' is simply nothing short of epic. (DG)

Not wishing to sound like some old man but Harmony Rockets are exactly the type of thing ATP should be about – off the beaten track choice, rare, possibly once in a lifetime occurrence, and possessed of a surfeit of awesomeness. Their one track, 41 minute 1995 album The Paralyzed Mind of the Archangel Void receives a considerable overhaul: Jonathan Donahue doesn’t sing at all, and there’s more of the lushness of the latterday Mercury Rev, but this is considerable heavier than the recording, roaring up to a thunderous, night garden-scented organic Kraut peak straight away, before a quieter midsection, followed by one last pastoral blast of sound. (AL)

Having witnessed Sonic Boom in various guises over the years, it's refreshing to report that the current line-up of Spectrum is perhaps his most rewarding project since the halcyon days of Spacemen 3. Looking as youthful as ever, his vocals sound crisp and sharp, aided and abetted by a musical tour de force that does the great man justice for the first time in well over a decade. 'How You Satisfy Me' is wondrous, 'When Tomorrow Hits' slightly prophetic the next day after indulging in one too many vodkas, while 'Revolution' is perhaps the only time communal karaoke will ever occur at an event such as ATP. (DG)

Sonic Youth have an impressively wayward history of ATP setlists, but accepting the fact that this is basically The Eternal with a couple of old songs thrown in as a sop, this is as accessible as they've ever been here. Like Yo La Tengo, one feels that they’ve become so good at being themselves (or at least one fairly accessible version of themselves) that it’s harder for new releases to make the impact they used to. Nonetheless, this would seem to posit The Eternal as as solid a bunch of pop songs as they’ve ever written, whilst a final ‘Death Valley ‘69’ gouges a burning canyon through the air. (AL)

After the huge disappointment that was Sonic Youth (sorry Andrzej!), we trudge outside to the Reds bar in search of some salvation and fortunately find it in the shape of ex-Cocteau Twin Robin Guthrie. His one-man orchestra of ambient shoegaze is a joyful interlude before round two of the headliners. Set against a projected backdrop of colourful images and slides, Guthrie's set is a breathtaking exercise in making something so complicated sound refreshingly simple. A failed attempt to count the number of pedals he's using is made; more success is achieved at the merch stall after instead, where a huge fortune is spent on acquiring several CDs. (DG)

It would be the height of indie snobbery to deny My Bloody Valentine are in pretty fine form tonight: they lightly fluff the start of one song, but barring that it’s a series of hazily gorgeous, still entirely alien sounding pop songs blasted out at admirably vicious volume, topped off with that still remarkable Holocaust Section, a primal blast more avant art than actual music. Still... they’ve been reformed a while now and are yet to show signs of developing any new tricks, whilst the band’s dour refusal to engage with the festival, beyond playing three apparently identical sets, feels rather ungenerous. Combined with relatively obvious, very guitar-centric musical choices and I can’t help but think that this hasn’t been a vintage edition. Or at least, I think that after Shields has finished beating the shit out of me via the medium of amp. (AL) No Age come on and blast straight into ‘Sleeper Hold’ and it’s ecstatic; 45 minutes later Bob Mould’s on with them and they’ve vapourised their way through – um, well I assume it’s some early Husker Du, TBH it’s too loud for me to work out what the hell it is, but it’s frickin’ amazing, an onstage inferno that represents a proper band that REALLY SHOULD HAPPEN. It’s so absurdly intense that Fucked Up’s Vice-friendly take on hardcore, normally so entertaining, just feels rather clownish, like seeing some dude downing a keg when the last guy was gargling hydrochloric acid. And, delightfully, a friend of a friend cops off with Mr Mould the following night – whattaguy! (AL)