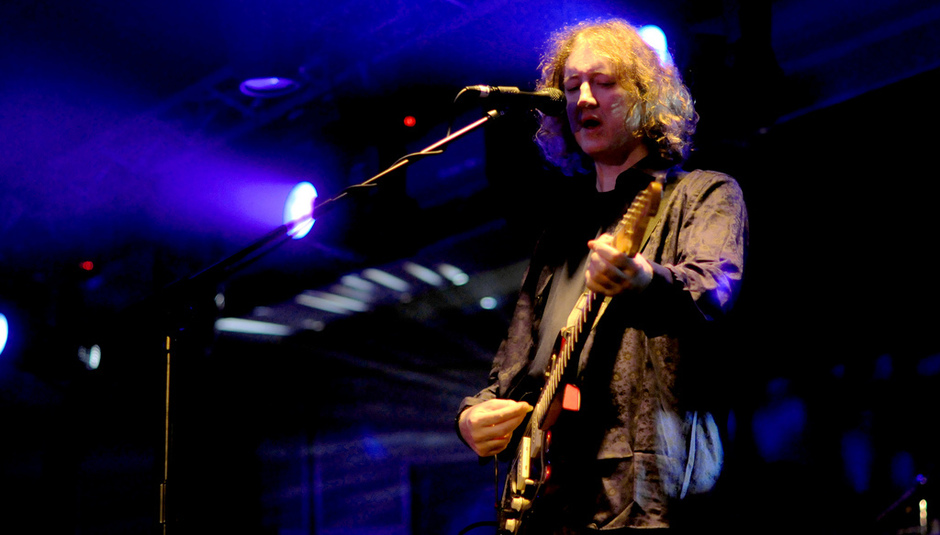 Having somehow managed to negotiate possibly the most horrendous country lanes my trusted Micra has ever encountered, we finally arrive on site amidst several queues of confusion. An hour or so later, all checked in and dried off, the out-of-season summery vibes of De La Soul kickstart our weekend. As with their performance at the Explosions In The Sky ATP eighteen months ago, they're a blast, most notably so when 'Me Myself And I' preempts a zealous sea of waving hands, no doubt relieved that they've actually made it to Minehead in one piece. (DG)

Manage to arrive too late for Josh T Pearson, who proceeds to bait me all weekend by standing next to me, constantly, whilst clad in a vaguely unhygienic looking fur coat. Opt to console self via medium of a Yo La Tengo set that eases the weekend in very nicely indeed thankyou. Not entirely clear which of their several awesome 15-minute-long Krautrock epic they kicking off with ('Pass the Hatchet'?) – but it’s a doozy from then on in, a set of crisp, slinky songs that draw heavily on the recent Popular Songs and suffers not a jot for it. I suspect being so classically Yo La Tengo is what’s led to this latest record getting a little overlooked; fuzzed out and beautiful and everything I dreamt it would be live, ‘Nothing To Hide’ is in serious danger of being the most perfect song they’ve ever written. A funky outing for their cover of Sun Ra’s ‘Nuclear War’ is perhaps inevitable, but it’s a nice touch in a festival that feels rather devoid of the cross-pollination that normally makes ATP so special.

Pop down to see a bit of Primal Scream. The version of ‘Rocks’ they’ve playing is so hysterically karaoke-like that I have to kind of admire the un-ATP-ishness of it. Um, for about 30 seconds before going to watch the end of Yo La Tengo. Return for decent-ish takes on ‘Loaded’ and ‘Accelerator’ and it’s, y’know, not awful, but still – Kevin Shields doesn’t show up, there’s no playing up their considerable avant garde side. I hope they came cheap, because this festival could have done with a few more special, smaller touches. (AL)

Throughout his chequered career, the Television Personalities' Dan Treacy has managed to confound, disappoint and court controversy in equal measures. Reports of their most recent London show don't bode well, particularly as the frontman's health was said to be in chemically-induced decline once again. Thankfully they're a revelation here in the homely(ish) confines of the Reds bar. Resplendent in his trademark woolly hat and combat jacket, Treacy plays a set that culls from three decades worth of material, 'Picture Of Dorian Gray' proving the highlight. By the end the dancefloor is a heaving mess of sweaty bodies. Dan Treacy looks delighted, cheesy grin plastered across his face. And so he should. (DG)

As someone who has seen My Bloody Valentine more times than they'd care to mention, it's fair to say that one major criticism that has dogged the band right from their humble beginnings to the present is a lack of consistency. This, despite Kevin Shields obvious quest for perfectionism, means that the first half of tonight's set is littered with false starts, elongated gaps between songs and at one point, what even appears to be a soundcheck as the PA is turned off while guitars are re-(or should that be de-?)tuned. More than likely the result of last night's no show, this actually feels more like a rehearsal than a show, and even the feted "white noise holocaust" mid-section of 'You Made Me Realise' is strangely subdued by their standards. First night nerves perhaps, but better is expected over the course of the weekend, and by the final night, duly delivered... (DG)