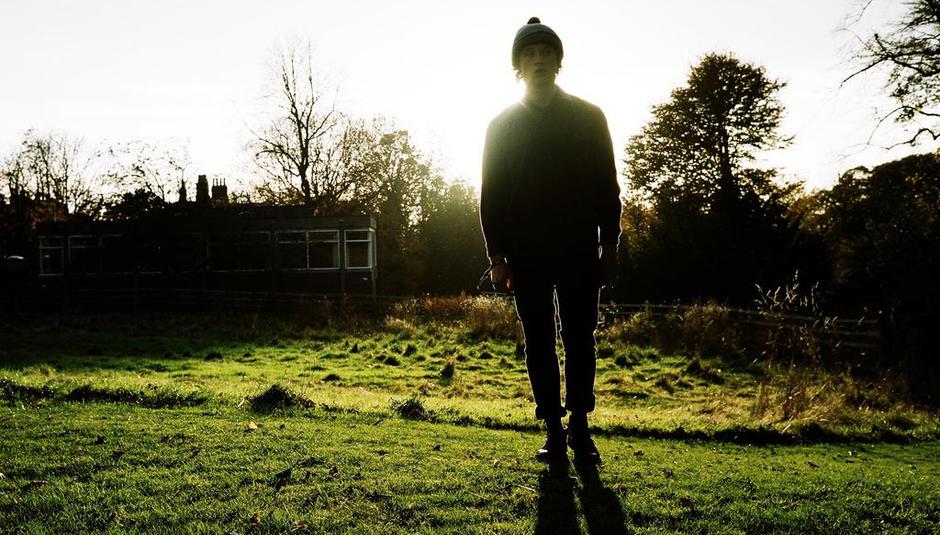 As the brainchild behind Spectrals, Louis Jones could perhaps be forgiven for hiding behind his shy exterior. Aged just twenty, his solo project wasn't initially intended for public consumption, but having created the obligatory MySpace site, the last six months have seen a constant flow of press and record labels queuing up for a piece of his Spector-goes-surfing inspired lo-fi pop.

Dig a little deeper however and you'll find someone who's not as naive as one would expect, and in a world where politician-style answering represents the order of the day, stands an opinionated individual with more than his fair share to say. Although tagged onto the ever-thriving Leeds scene, Jones is quick to distance himself from that clique. It's this self-minded approach, not to mention a handful of insatiable tunes that persuaded Captured Tracks to take Spectrals on board and last week (2nd November) saw the release of his debut seven-inch single, 'Leave Me Be/Don't Mind'. With a split single also featuring Fair Ohs in the pipeline soon and an album set for release early next year, these are exciting times for Jones.

DiS caught up with him on the final night of his first UK tour supporting Desolation Wilderness...

DiS: When did you start writing as Spectrals?
Louis Jones: At the beginning of this year. I was in another band called Old Gold, and I wrote all the songs with them as well. The newer stuff I was writing didn't really fit in with what they were all about anymore and I just decided there was no reason why I couldn't make this work on my own. I had some free time and started writing the songs that pretty much make up the current live set. At first it was never my intention for anyone else to hear them. I wouldn't even have known who or where to send the songs to if I'm honest. I made a MySpace so friends could hear it and added a few bands and labels I was in to such as Woodsist and Captured Tracks. A few weeks later Captured Tracks sent me a message asking if I'd be interested in putting a single out and its all spiralled from there really.

DiS: There has been a massive buzz around you for a few months now. I remember talking to several Leeds-based musicians at Leeds Festival in August and your name came up every time.
LJ: It feels weird in a way that these people would talk about me because I don't have too many friends in those circles. I think there's been a lot of jealousy within Leeds and its music scene about me to be honest...

DiS: In what way?
LJ: I've come in for a lot of criticism on the Leeds Music Scene forum. I think a lot of the people at the forefront of that scene just don't get the music I'm making. I'm not too bothered if people don't like the sound or the songs, but when the criticism is saying it's unfair that I'm getting recognised before certain bands who've been going longer than Spectrals I find that quite disheartening.

DiS: But surely you could turn that on its head and argue that if certain bands have been doing the same thing for years and still achieved nothing then maybe they're the ones who need to be re-evaluating their futures?
LJ: It's awful to say but maybe there is some truth in that. I just don't see why I should be held responsible for their failings. I don't understand that kind of thinking.

DiS: It's a shame because Leeds has undoubtedly been one of the UK's most vibrant cities musically this past decade.
LJ: It has, but if your face doesn't fit that's it. I feel more at home playing in places like London or Nottingham. There's a warmer vibe.

DiS: Pitchfork had already written about Spectrals. How did that make you feel?
LJ: Quite strange, but not in an awful way. Quite nice really. It's nice to be viewed as part of the same community as bands that I'm really in to.

DiS: How did Pitchfork get to hear about you?
LJ: I'm not sure. I think Captured Tracks must have had something to do with it. Pitchfork just messaged me out of the blue asking for an MP3 and even after I sent them one I had no idea what they would use it for.

DiS: Your sound is more comparable to several American rather than UK artists.
LJ: There are a lot of American influences in it. The whole doo-wop thing and a lot of soul music for example, and obviously the surf influence too - I'm a big fan of The Beach Boys. It wasn't a conscious thing to sound American or regional in any way. I don't want it to be that specific but that's the music I'm in to.

DiS: It is quite unusual for a twenty-year-old such as yourself to have most of your influences coming from an era that would probably be more familiar to your grandparents.
LJ: Parts of what I like definitely came from my upbringing, hearing different kinds of music as a kid. A lot of it also came from identifying sounds I liked, and then tracing them back and arriving at certain eras of music. Even the newer bands I like seem to draw from similar sources.

DiS: Where would you classify Spectrals being in terms of a specific genre?
LJ: That's a difficult one. I don't really think I could put myself into any one genre. I like all the Captured Tracks bands, but most of them are quite different to one another. I'm a big fan of garage rock, people like Billy Childish, Male Bonding, The Fair Ohs...

DiS: You also seem to be quite popular with the whole DIY/fanzine underground. Would you ever see yourself appealing to the mainstream as a lot of your songs have definite crossover potential?
LJ: I certainly wouldn't be opposed to that! Some bands seem really obsessed with the concept of actually selling records, but I don't regard that as an issue. It's nice that someone else wants to listen to my music anyway, so if more people make that same choice then it's fine by me.

DiS: Spectrals is essentially just you, although live you play as a four-piece. Does this extension carry over into the recording process?
LJ: No I record everything myself. The reason I get other people involved for the live shows is that I want to be able to do the songs justice in front of a live audience.

DiS: How did you get the other three live band members involved?
LJ: The drummer's my brother, Will. I knew the other guitarist (James Levitt) through playing in my old band and he was putting on shows and writing similar kinds of material for his own band. The bass player (Matt Benn) actually joined us after he bought one of our cassettes online. He messaged me and seemed really enthusiastic and fitted in quite well, which was perfect as I couldn't really have taken the show live without a proper bass player.

DiS: Are the three of them happy just being your backing band with no creative input whatsoever?
LJ: They understand that Spectrals is me and coming from a very specific place. I realise that it must seem strange from the outside that they have no real input into the songs but that's the way it is. If any of the other three ever were to get involved in writing with me or asked me to play on something they'd written it wouldn't go under the name Spectrals, simple as that really. I like the fact that by doing everything myself - the lyrics, the music, the arrangements and the recordings - I can be in total control.

DiS: You're coming to the end of your first ever tour. How's it been?
LJ: London was fun. Leeds was pretty terrible! There was no atmosphere there at all.

DiS: The music press have been quite favourable to date. Do you pay much attention to what they're saying about you?
LJ: The NME one wasn't that positive. It seemed to just talk about things that are beyond my control like how old I am for example. The Rough Trade one for the single was nice, and quite unexpected too. It's like I said earlier though; I didn't intend for these songs to be heard by too many people outside of my close friends so they're probably going to be more indifferent because they might not understand what I'm talking about or where I'm coming from.

DiS: What are your songs about?
LJ: They're all pretty straightforward love songs I guess but my way of writing about the subject is quite bitter.

DiS: Are they all about the same person?
LJ: Yes! The girl they're about gets a bit worried sometimes because a song like 'Rot With Me' for example can come across as being quite nasty, so I had to explain to her that it was written at a different point in time when things weren't going so well.

DiS: How many songs have you got at the moment? Obviously there are the ones that make up your live show but are there any others that you'll be incorporating into the set soon?
LJ: Yeah for sure. I'm recording four new ones next week that are already written. I'd rather have the songs recorded though before the band start learning them.

DiS: What forthcoming releases do you have planned?
LJ: The album will be out on Captured Tracks sometime during the first part of 2010. The next planned release is a split seven-inch single with London's Fair Ohs on Tough Love Records in January.

DiS: Just one final question. If Spectrals ceased to exist tomorrow what would you like people to remember you as?
LJ: The Leeds lad that got away?

Spectrals can be seen at the following venues:-

The single 'Spectrals' featuring the tracks 'Leave Me Be' and 'Don't Mind' is out now on the Captured Tracks label.

Felix write to DiS: on touring with S...