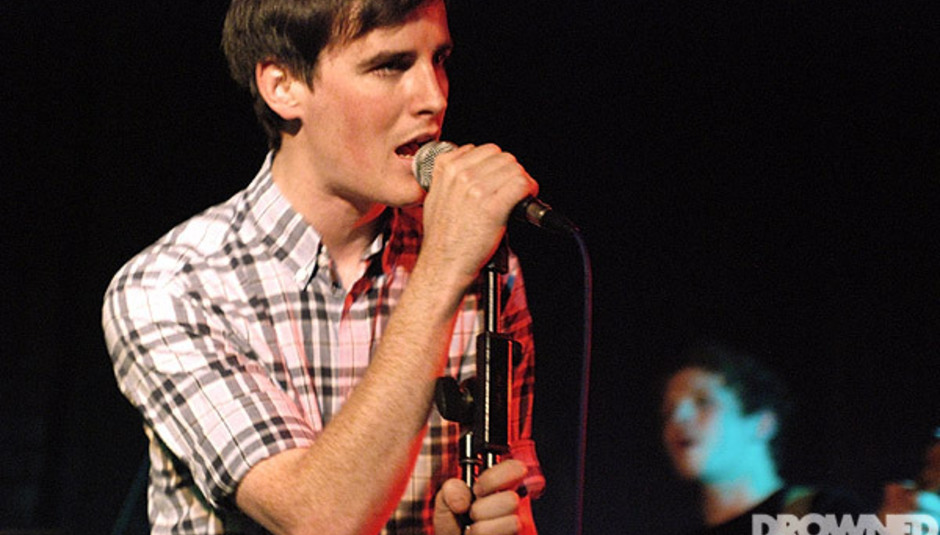 Leeds's Charity Festival Brainwash enters its fourth year in 2009. We sent along William Grant to check out proceedings. Click here to view Brainwash In Photos.

Tonight already feels kind of surreal. I feel like I’m sat in a Butlins camp, and not the anticipation ridden type of Butlins you could find at ATP. The Woodhouse Club is has a balanced ambience to it from the start, with the centre floor slowly filled by the laid-back plaid of youth amongst and their conversational acoustics, with a smattering of the calming mature presence littered around the seats. This placidity is surely in direct opposition to what Brainwash is about, and so the opening band of the festival proves me right. That band was Paper Tiger, a Leeds based collective who deal in spoken word spiels over dub-laden psychedelice jazz. Frontman Raphael Attar is a perfectly affable young fellow, coming across as a more romanticised Scroobius Pip with lyrics that could make even that scampy Lily Allen blush. They whip the crowd into a slow walking pace and come across as more of a valium inebriated nu-metal outfit then their desired output of electronica led hip-hop. Brightonians Diagonal follow up, albeit with a really trying mix to start. Yet more stoner influence is on show, with the band playing an able blend of Led Zep style rock blended with the occasional heavy slant of Kyuss. There’s little room for nuance in their obviously grand sound, however, and the anticipation for tonight’s headliners seems to overawe the senses of the crowd.

The venue is still only half full when Jaga Jazzist arrive, but the throng beckon their new champions with open arms. Having just come from a (no doubt) triumphant performance with Efterklang at The Barbican in London, the nine piece outfit surf through an abundance of new material (including the brilliantly named ‘Banana Flies Everywhere’ and ‘One Armed Bandit’) and there is a synchronicity, both tonally and ergonomically, that is rarely achieved with such an experimental outfit. And as they close the night with ‘Day’, ironically, both they and us in the crowd are utterly thrilled. Still in a state of half mind lapse from the events last night, I venture into the Library to be greeted by Hallowe’en costumes; lots of them. This is a Scream bar on a pre Hallowe’en Friday night after all. Luckily for all of us music followers, the events are away from prying eyes and cheap WKD chats upstairs. If any of those scarily clad folk had walked in to see Blacklisters, then they would have had a fright not even a demure med student dressed as a corpse bride could give them. They display a brute force that perfectly denotes my feelings of being in a Scream bar on Hallowe’en, and so my body moves in unison with the heavily immersed crowd. Combining the style of early Glassjaw with the technicality of Converge and the heavy sensibility of Deftones seems tricky on paper. Blacklisters tear up, chew up and (metaphorically – bear this in mind Bring Me The Horizon, yeah) piss on that paper. A wonderful wake up call.

Midst the changeover, I become distracted by Michael Haneke’s remake of ‘Funny Games’ being projected onto the screen. Now that’s genuinely scary, and seems even more haunting when used in such a silenced context. Unfortunately, it does nothing to help Bad For Lazarus, who’s sleazy brand of heavy rock doesn’t so much take the crowd by surprise as prove an unwanted distraction. Maybe it’s down to the proclivity towards the tighter clad end of heaviness on my end, but they feel and, more than anything sound out of place in tonight’s setting. Undoubtedly great showmen, the golf tournament applause that greets the ending of their song says quite a lot, and the interjection at the end of Battles ‘Tij’ comes as respite. If Battles comes as respite, that also says quite a bit.

Luckily though, the highlight is really saved for the end of the evening. "Are You Ready?!" Paul Astick calmy proclaims over the microphone. Probably not, as Chickenhawk arrive to show us all just how boneshattering heaviness can and should be done. With songs about the large hadron collider, and a drummer even Zak Hill could envy, you can instantly see why they have won over so many fans in their locality. There isn’t a technical blemish at any point and my pen moves from my notepad, into my pocket, and my head ebbs into an unrelenting session of back–and-forth. If anything, the whole night seems reminiscent of those not so long-gone days of my Nottingham flutters with hardcore. The amiable energy and accessible brutality of hardcore seems alive and well in Leeds, and long may that continue in whatever guise.

Now, this is genuinely Halloween. Just the actual day, mind, so the darkness I arrive into seems far more apt then any student throngs of party popper induced madness. Down in the Royal Park Cellars, Holy State should be causing quite a stir. The dense black walls should be dripping with sweat and I half expect a baying crowd holding a lone crowd surfer to the ceiling. That’s what they deserve, but the subdued crowd nullifies to that. Only a brief woebegone show of energy from a denim-clad fan to the front creates a slight tickle of fervour, which is a damn shame considering what the bruising the band dole out live.

Moving to the larger surroundings of the Brudenell, Invisible Cities are creating the ghoulish background for a mid evening stint in the back room with their orchestral instrumental tunes. Undoubtedly good, but by no means anything earth shattering. So a move to see Worriedaboutsatan back at the Royal Park is a welcome change, and one that is far from regrettable. The two boys bring the first sniff of electronic music to my weekend, but confining them to such a small change doesn’t facilitate just how powerful they are live. The seated throng are completely immersed throughout and, as a gesture of good will, the boys stick around to shake a fair few hands afterwards. A really lovely moment for a really quite fantastic outfit.

This Town Needs Guns draw the biggest crowd of the weekend so far, and say they have come to this Halloween party as ‘Geography teachers’. My geography teacher was never this talented, but he sure as hell was this cardboard. A new glut of material would do them good, but there’s no doubting that ’26 Is Dancier Than 4’ can still whip any such crowd into a frenzy. Maybe my negativity stems from how, by this point in the night, my senses have deteriorated. An influx of attendees remind me that the real highlight is yet to come, and so the transition between my initial boyish excitement of a day of live music morphs into something all the more aged. I was not prepared for Pulled Apart By Horses, but my days was I glad that I stayed. This show feels like the most potent homecoming event. For the first time this weekend, the crowd in its entirety moves. They know it’s special, as do we, and while the energetic folly of their live appearance may overawe their actual material, there’s absolutely no doubting these guys need to be seen live. It’s a gobsmacking performance and one that swallows the previous aura of Saturday’s festivities whole. The stage invasion at the end of ‘I Punched A Lion In The Throat’ is thrilling as opposed to clichéd, and they dressed like ghost sailors by the way. Sweet.

Arriving at the university union in the dark, hungover and really quite cold, it was perfect timing for Jonquil to warm me up with their folky twinges. Little did I know that the folk has flown the nest, in favour of an entire new set of pop gems. It sounds like it’s going to be a brave break from the norm, but with a voice like Hugo Manuel’s, it’s impossible not to fall in love with. Certainly going to be an anticipated album next year.

Moving swiftly upstairs to catch the end of These Monsters (yet another Leeds troupe!), the room is packed. And for good reason, as the confines of Pulse reverberate their brand of jazz infused Isis-ness perfectly. The same, unfortunately, cannot be said for Vessels. Playing in Pulse as opposed to the larger Mine venue would have done them wonders, as tonight, everything sounds a bit flat and gets nowhere near the power they need to make their math-based post rock stand out.

BLK JKS then bring a rollicking set of complex psychedelia into my world. Yes, they’re from South Africa. No, they don’t sound like TV On The Radio. Clear? Good. Because their ability to weld a mosaic of styles into something unique and cohesive is really impressive, and they stand out amongst the days clan of musicians as something truly unique. The drummer is a rolling ball of energy throughout, and as the crowd slowly depletes from its mass of Simpsons Lollapalooza bopping to see events next door, the performance becomes even more personal and special. Shame for those who left, brilliant for the rest of us.

Grammatics follow in the same space, following an epic performance from Oceansize. The final Leeds band of the weekend draw yet another big crowd, but there’s little diversion from the sheen of their debut album which reduces a level of urgency and energy in their sound. A little shabbiness could go a long way, but that’s not what Grammatics do. Though what they do is note perfect throughout, it’s too cold to really connect with properly.

And so, to inject warmth and oppose our collective shivers, Efterklang are saved for last. From the moment they step onstage, a smile does not leave my face. The joy that Casper Klausen and co. resonate throughout each track is monumental and impossible to ignore. There’s no proviso with their music, either. It’s purely joyous, and that encompasses some almost Shins-sounding new material as well. In their all too short hour, ‘Step Aside’ singes the aural cavities with it’s glitchy electronics and soothes with it’s horn-led choruses, while ‘Caravan’ and ‘Mirador’ stand as highlights despite a lack of orchestra. Of course they were going to be fantastic, but to leave us all on such a high at the end of a festival is a true feat indeed.

So, Brainwash is, yet again, a success. A seamlessly run festival with it’s heart on its sleeve, showcasing the best of the best of Leeds underground music and balancing that perfectly with some of the most interesting acts out there today. There’s a loyalty to the growth of that scene, not to mention a longevity to it, that can hardly be attributed to any other area in the country. A definite success and long may that continue. Let’s hope for some epic fifth birthday celebrations.