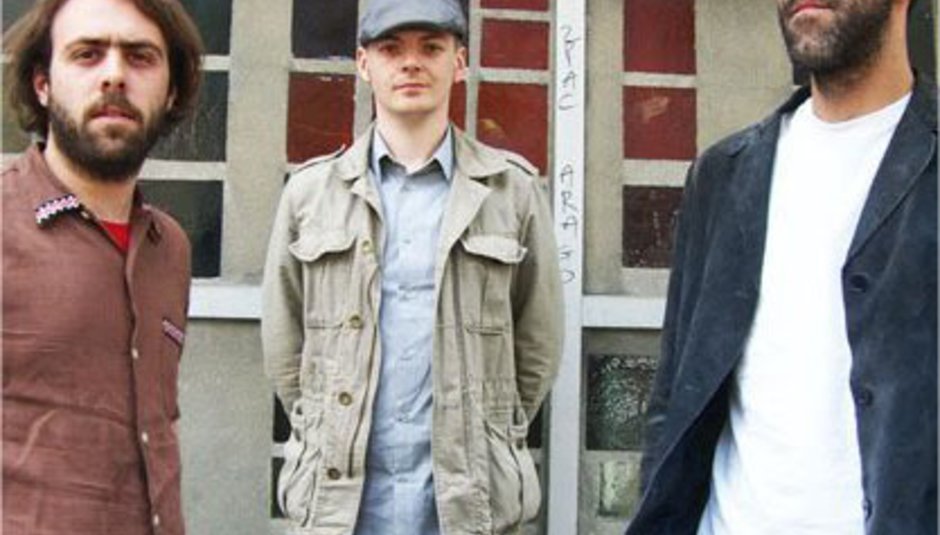 Parisian multi-instrumental three-piece Yeti Lane may be the latest signings to acclaimed shoegaze label Sonic Cathedral, but their sound is anything but typical of that or any other genre.

Previously three quarters of experimental post rockers Cyann & Ben, when Cyann announced she was quitting the group just as they were working on their fourth album, the other three band members - Ben Pleng, Charlie Boyer and LoAc - decided to pursue other avenues, most notably focusing more on melodies and pop hooks than time signatures. The name Yeti Lane comes from a combined love of certain releases by Amon Duul II and The Beatles, while recent single 'Lonesome George' drew comparisons with the likes of Talk Talk, Grandaddy and New Order.

Their self-titled debut album is out in the new year, and although they're a fairly unknown quantity just yet on this side of the channel, this time next year they might just have the potential to break through.

DiS caught up with drummer/organ/mellotron/general all-rounder Charlie Boyer prior to their inaugural UK show at London's Legion.

DiS: The three of you were initially part of Cyann & Ben. What are your memories of working within that dynamic and how have things changed as Yeti Lane?

Charlie Boyer: Cyann & Ben was a four-piece band. After seven years of activity each one of us knew what our roles were. Now that we've become a three-piece, each member has had to redefine what he could do, so it's like a new dialogue. One person was missing so we had to find a new way to play, the balance changed and the three of us had to find a new place. It’s really interesting, because each one got more freedom, and at the same time it’s more complicated to find who’s going to play what.

Video:Yeti Lane 'Only One Look'

DiS: What was your initial reaction when Cyann announced she was leaving the band?

CB: We were not so surprised and it happened naturally. Both Cyann and us knew that it was going to happen, as she was less and less involved in the band’s life.

DiS: Was it a conscious decision to change your sound drastically when continuing as a three-piece?

CB: Changes were already on their way. We were kind of fed up with some automatisms we could have had with Cyann & Ben. When Cyann decided to quit it just accelerated the process; as soon as we decided to continue as a three-piece, it became obvious that we had to do something different.

DiS: Did any songs get completed for the fourth Cyann & Ben album and if so, will they ever be released?

CB: We have some unreleased tracks collected during the Cyann & Ben years, but there are no plans to release any of this material just yet. Our main thoughts are focused on Yeti Lane now.

DiS: What are the main differences in terms of musical influences between your previous band and Yeti Lane?

CB: Each one of us listens to different things, and our sound is the result of all those influences. We’re still liking more or less the same things, but the time has passed since the first songs of Cyann & Ben, and of course we’ve been influenced by a lot of things that came out (or that we just discovered) over the course of those last seven years. We wanted to focus on the “pop side” of what we used to do, by working on the songwriting and the rhythms for instance. The post-rock influence has almost disappeared.

DiS: Your sound has both English and American elements to it. Do you feel your music is better received in those two countries than your homeland?

CB: It's just the beginning so it's hard to tell. But you’re right, the kind of music we play is not so present in France, even if it’s more common these days rather than a couple of years ago. We hope that English and American audiences will enjoy our songs. Time will tell I guess...

DiS: What is the French music scene like and are there many opportunities for more leftfield orientated bands such as Yeti Lane to progress within the mainstream?

CB: There aren't that many bands like us. But there's a bunch of good bands, very original & inventive not just in Paris but other parts of the country as well. The fact that some of these bands have been well received in the UK and other parts of Europe certainly help all the other bands to get more credibility. Maybe it's the beginning of something and we hope it becomes more visible.

DiS: Would you ever consider re-locating?

CB: There was a time where we thought about moving to Berlin but it seems that we're attached to our Parisian lifestyle too much!

DiS: How did you become involved with Sonic Cathedral?

CB: Sonic Cathedral booked a show for Cyann & Ben in London in 2006 and we stayed in touch. We sent the 7” to Nat (Cramp, Sonic Cathedral founder), he liked it and asked for more tracks. He also liked the album, and he proposed to release it!

DiS: Does it worry you that Yeti Lane may become pigeonholed as a shoegaze band by being associated with the label?

CB: We don't mind about being associated with the shoegaze scene. We like this kind of music. It's rare that the association is correct with the idea that the band makes of itself. Our sound is a mix of a lot of influences, and shoegaze is a part of it, like indie rock, kraut-rock, pop, experimental and so on...

DiS: The single 'Lonesome George' has received some excellent reviews so far including one here on DiS. Do you pay much attention to the press and how would you react to a bad review?

CB: We're sensitive to any kind of reviews, bad or good. And we try to take notes of criticism even if sometimes it hurts.

DiS: Your debut album is due out in January 2010. What can we expect from that record in relation to the previous single and will there be any surprises?

CB: Each song is different and a track like 'Lonesome George' is just a part of the Yetis sound. It was an obvious single, and we also have some mid-tempo stuff. We still use the guitars/synth/drums combination that we like, but some friends also came to help us in the studio. Cyann played piano and synth, Etienne Jaumet played saxophone and Lori Sean Berg (of The Berg Sans Nipple) played trumpet, so I guess that’s not a surprise anymore now that I've told you, but I hope people will like it!

DiS: Are there any plans for future singles from the record?

CB: Yes, in mid-January. It will probably be a digital only release, as we still don’t know which track will be chosen. We have some unreleased tracks in the bag and some remixes planned, so maybe we could release another 7” or EP later on next year?

DiS: Will there be a tour planned to coincide?

CB: We are working on it.

CB: Besides touring we're already thinking of our next album. As soon as we're ready we will record it. We have a bunch of songs in progress and a few that we're playing live at present.

DiS: Finally, if there was one piece of music you could claim to have written as your own by any other artist, what would it be and why?

Ben Pleng: Without being too pretentious it's hard to tell. I love the song 'Do You Realize' by the Flaming Lips. I love the way it can be really dark yet completely luminous.

The single 'Lonesome George' is out now on Sonic Cathedral.
The album Yeti Lane is set to be released on 25th January 2010.

For information on the band visit their MYSPACE.