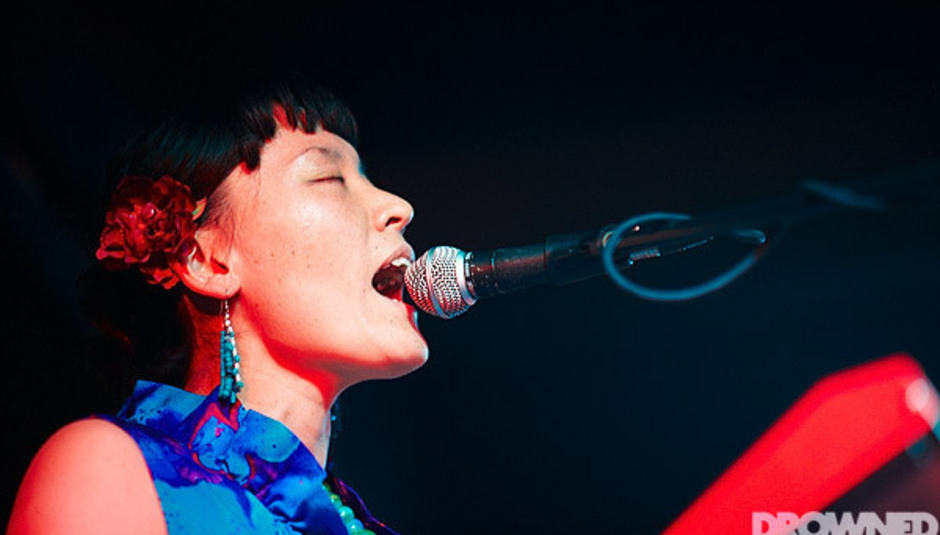 It’s a measure of quite how central to the Bristol scene Geoff Barrow is that wherever he wanders into the shiny new halls and walkways of Colston Hall, he’s greeted with waves, smiles and courteous nods (all returned of course) like an old friend. Maybe it doesn’t mean all that much; after all, he is one third of Portishead, one of the citiey's most powerful musical exports, but it’s hard to imagine Robert Del Naja getting the same treatment.

The deliciously alliterative Invada Invasion is more than just a chance to wave coquettishly at Geoff, however. The recently refurbished and soon to be renamed Colston Hall is celebrating its opening with a programme that includes selections from Geoff’s own label, alongside other invaders and friends.

Proceedings kick off with a raucous set from Thought Forms in the surprisingly noisy foyer area. A mix of titanic fuzzbuster riffs and post metal touches, they’re an excellent start to the evening, especially when they swap bass guitar for mournful feedback laden cello. They might mine a very familiar seam, but they do it with an aplomb that’s commendable.

It’s with some trepidation that DiS approaches Team Brick: his experimental odysseys have left us puzzled and rather lukewarm on previous occasions. This time, he plays a more peripheral role than his usual one man band noisemanship, allowing an orchestra and choir to perform his compositions. And it’s actually rather engaging; in a chin stroking rather than a foot tapping way, our man banging his drum as the orchestra swoon and sweep in a jarring manner.

Joe Volk also shows he knows how to make best use of an orchestra: his soft acoustic pluckings and cryptic lyrics balanced out excellently by swooning strings and the occasional triumphant percussion roll.

It pains DiS to not be able to say the same for his side project, Crippled Black Phoenix, who leave us very much in two minds. On record, they’re an elegant and creaking cacophony, but live, they seem in yoke to the very worst type of prog. When they hit their stride, the thundering riffs and galloping drumwork disguises the overindulgent theremin wrangling and horrific Europe-esque keyboard sounds, which leave us feeling more bored than the poorly used orchestra. By the time the wailing guitar solos start coming thick and fast, we’ve wandered off to grab a swift half from the admirably stocked bar.

A half we have to drink doubly quick as we squirm our way into the packed foyer to catch a glimpse of Luca Mai limbering up his tenor saxophone. Zu are loud tonight. Very loud indeed. Their ‘deathjazz’ is a punishing implement in its own right, but through a foyer PA which appears to have been souped up right to the limit, they pummel and pound their rigid grooves right into the base of our skulls. The bass is thick and liquid, the drumwork completely astounding; and the rush of adrenalin we get when Mai starts to batter his ‘horn with his hands is absolutely unbeaten all night.

It’s unfortunate that Zun Zun Egui suffer the fate of overlapping with their alphabetically challenged Italian cousins: on any other night we’d have made them a must see. As it is the 15 minutes or so we catch shows no sign of erosion from a band quickly gathering up a colossal head of critical steam. Their taut Deerhoofisms wrangle with something undeniably more pyschedelic, to create a veritable carnival of sound. The best description we can come up with is ‘how we want Dirty Projectors to sound’.

For a band we’ve seen countless times, it’s hard to explain quite why we’re so excited about Mogwai, but as almost anyone who’s seen them will tell you, theirs is an emotional and addictive performance. Whilst tonight’s set does dip a little in the middle, we can forgive them, especially when they turn ‘Take Me Somewhere Nice’ into a bone-rattling feedback trip, before launching into a frankly awe-inspiring ‘Batcat’, dedicated to Stuart’s wife, who’s travelled down with them on her birthday. How’s that for a present?

Sometimes the best really is saved till last, and at this point DiS abandons all objectivity and starts to metaphorically slaver all over the proverbial page. Because it’s been left to Fuck Buttons to close affairs, which they do so with all joy of a paint splattered wrecking ball let loose amongst drab Seventies tower blocks. The duo seem to have taken heed of critics of their previously linear live act, dotting tonight’s foyer performance with repeating themes and resurgent phrases that climb out of their fuzzy whitenoise and towerblock beats. At the start we’re sceptical and exhausted, by the end of a phenomenal ‘Space Mountain’ we’re enthused and exhilarated.

All that’s left to do is hunt down Barrow, and ask him if he’ll do it again. “Yes, tomorrow” he chuckles, before hastily adding that perhaps that’s a little ambitious. Well, quite.

DiScover Mixtape #3a: Free Energy, In...