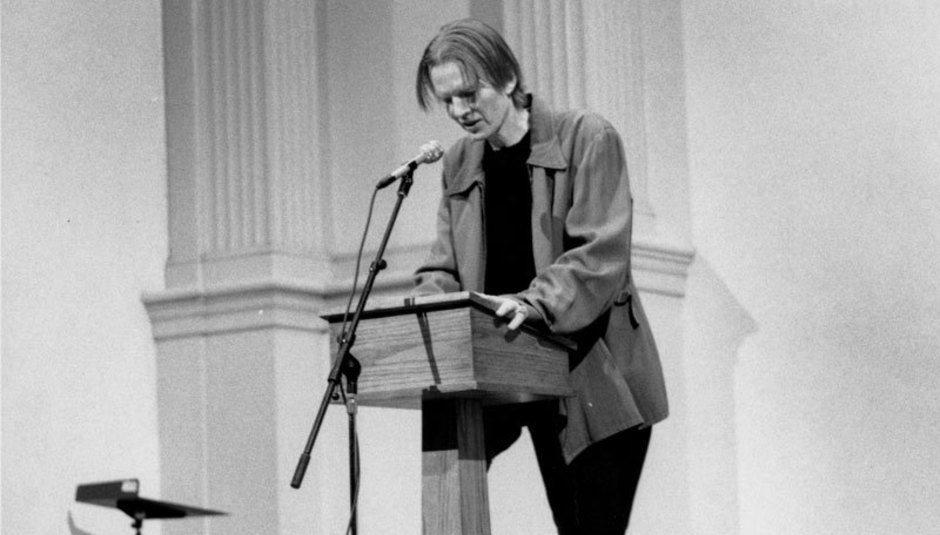 Sam Jacobs a.k.a alt country outfit The Flying Change penned this tribute to poet and author Jim Carroll last week. Though not a contributor to DiS we said we'd run this excellent piece. Here's what he wrote.

I heard today that Jim Carroll passed away. This news made me very sad. Jim is one of those strange characters in my life with whom I had a very intense couple of days and then never saw or heard from again. And I doubt he’d remember me. But I do remember him and I found him a warm and generous person and someone who could tell great stories seemingly endlessly.

Jim wrote The Basketball Diaries and was a pivotal figure in the New York punk and poetry circles in the late '70s and early '80s. He was a contemporary of all the legends – people like Lou Reed, Patti Smith, etc. and knew all of them very well. His ex-wife, Rosemary Carroll, is also one of the most powerful music lawyers in the city and married Danny Goldberg.

Here is my remembrance of Jim.

This guy I knew, Ned Ascher, that lived in the Norfolk area was a poetry guy and also booked talent for some clubs in the area. He set up a show for Infectious Organisms when I was managing them and we became friends. Those entertainment kinds of friends which is to say very intense very quickly and then flickering out just as rapidly to the point where now 10 years later I haven’t heard from him or seen him in years.

One day Ned called me and said there was a poetry festival being held in Norfolk and would I drive Jim Carroll from Union Station in Washington, DC. to Norfolk and then hang out with him the next weekend and drive him back? I didn’t really know of Jim at that point but said sure, I was up for an adventure. Jim didn’t like flying so he was going to take the train from New York and then I’d drive him the rest of the way.

I remember waiting in Union Station wondering whether he’d look anything like the picture on the books that I’d bought to get up to speed on his poetry. Pinpointing him turned out not to be a problem. He was a very tall, very strange looking guy and I believe he was wearing some kind of fuzzy scarf. Right away he seemed slightly different and I was able to immediately spot him and lead him back to my Black Mazda Navajo, on loan from my parents.

It was later in the evening when we finally got out of DC and it took us a good number of hours to drive to Norfolk. The whole time he was regaling me with stories of his youth. Stories of reading poetry in bars and clubs and churches downtown. Stories of seeing the Velvet Underground at Max’s and talking to Lou Reed. He told me about his time spent shooting heroin and how he’d written a poetry book called The Book of Nods which was the first time I’d heard of the term “nodding off”.

At some point, I got a call from a lawyer in LA who had head the Infectious Organisms album, Human Experience, and really liked it and when Jim heard that he immediately volunteered to send some music up to Danny Goldberg via Rosemary. I think I gave him ‘Halve the Light’ to send on to Danny figuring that Paul’s “post-country heartache” would be up the Artemis alley so to speak.

We finally arrived down in Norfolk and Jim did a couple of readings and I made a bit of an ass of myself in a few different seminars where I was confrontational with some of the speakers who were riffing on the equivalency of free association poetry and poetry jams versus written or constructed poetry. Meanwhile, I was the guy that was tracking him down for his appointments, hanging with him in his hotel room and so on.

Towards the end of the weekend, if I remember correctly, Jim got another ride back up to DC.

But before he left, he signed the copy of Living At The Movies that I’d brought. I believe it says, “To Sam, thanks for a wonderful adventure in the Confederacy, Jim Carroll” Which is a great inscription and near and dear to my heart.

I got back home and picked up a copy of Catholic Boy and was mildly blown away by how legitamtely great it is as a record. Jim has a perfect punk singing voice and the guitar tones and the production are classic early '80s New Wave/punk. My favorite part of the record is the second song, 'Three Sisters' for its vicious blasts of guitars and the way he sings "She says RAZOR when she goes down on you". He’s got this little New York lisp thing going when he sings and when he talks and it is pitch-perfect for the music and the way it all comes together. People Who Died continues to be an incredible song particularly the line where he says, "They’re all my friends. And they died." And he shouts it and you hear the longing and the anger and the pathos in his voice.

Unlike Adam Duritz, I never got as into Dry Dreams as Catholic Boy but they’re both great records. I remember Jim telling me about the photo shoot for the cover of Catholic Boy. Leibovitz shot the cover and it’s Jim and his parents walking around New York at a time when he was at the height of his powers and influence. He had a songwriter's eye and penchant for the well-turned phrase and that’s something that I admire and respect about him. I suppose that comes from being an accomplished poet. But the flare and the feel of the cover image, the record called Catholic Boy, the title ‘The Book of Nods’ or the title ‘Living At The Movies’ – they’re all brilliant. A powerful short effective idea. That’s perhaps why his transition to music was successful because pithiness is at the heart of great lyrics. Saying more with saying less.

For about six or seven months now, I’d been intending to call my next record Living At The Movies. Not per se in honor of Jim but as a reference to the time we spent together, to that book of poetry and then to other ideas that the phrase represents for me. For me, this idea of living apart from yourself. Observing life without experiencing it. Treating events dissociatively – as fodder and material for songs rather than as the guts of your personal existence. And then there’s the fact that I do happen to go to the movies a lot and for a time have been going even moreso than usual. So the title has felt right on a lot of levels. And I’ve had the title of this blog post sitting in my drafts for a long long time as well and been meaning to tell some of these stories.

And now Jim has passed away and I don’t feel qualified to write a proper obituary. I hardly knew him. But I can offer these stories up to anyone that’s interested and they can be added, even if in some distractingly tiny way, to the public canon and to the public memory of this poet and musician and artist.

I remember him as tall, with fine straight red hair, as having been through some very difficult trials, as being funny, as having an incredibly distinctive speaking voice, as turning me on to his music, as telling a great story, and, from what I knew of him, being a good and generous man.

Check out The Flying Change at MySpace.