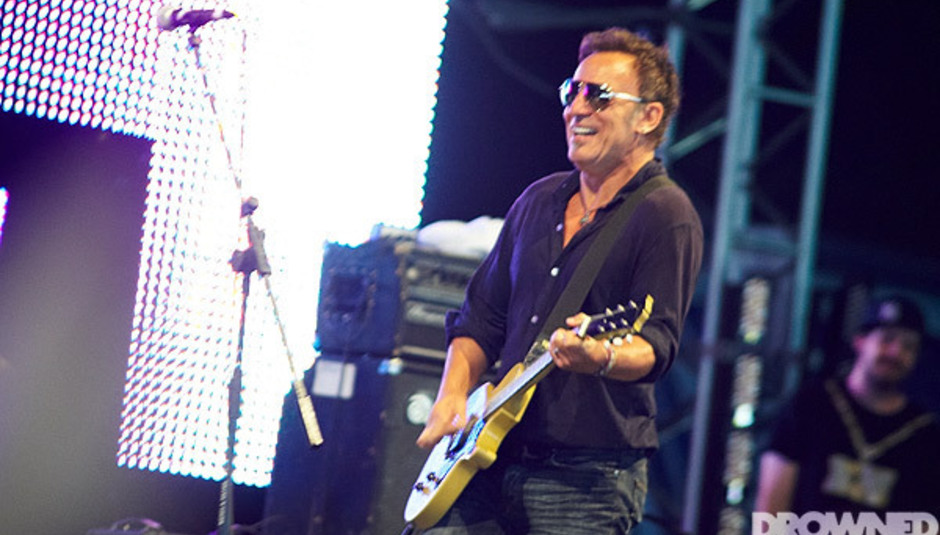 DiS's epic rundown of Glastonbury 2009 rolls on to the Saturday - go here to read about Friday, and here for plucky little cousin Thursday.

It would be both difficult and tedious to communicate how monumentally awful DiS feels when a blithely vengeful sun chucks pretty much everything it has at us at 9am. Let us just say that if you spend three days at a festival, cap the third off by guzzling a drink known only as ‘medicine’ for several hours (Shangri-La veterans may understand), combine with various other toxic items, get more or less set fire to two hours after bedtime, and be left with the full knowledge you still have two more days of this shit, it basically isn’t very nice.

Wander in a bleary daze to see Tinariwen, who have the temerity to remain in their full Tuareg robes. I mean, come on: the Sahara no way gets as hot as 27 degrees. Um, does it? Anyway, DiS is really not in a state to concentrate too hard on their dreamy desert blues, but maybe that’s perfect, the mind getting lost in the music’s spiralling heat haze. Not left with memories of many hooks, but most certainly an urge to hear MORE.

Can’t say the same for Eagles Of Death Metal - some riffs chug over the scorched plain that is the space in front of the Pyramid Stage, but it’s hard to really connect them to Jesse Hughes’ moustache waggling yee-haw antics. Remember being fairly bowled over by similar shtick at Leeds two years ago – conceivably that’s a better forum for their semi-serious semi-metal than Glastonbury, given it’s not really a festival given to hosting the music they’re sort of sending up. Logically Spinal Tap should balls up for exactly the same reason, but let's be honest: firstly, so beloved is This Is Spinal Tap that they could probably play 'Jazz Odyssey' at full length and we'd be delighted, and two, an actual Tap concert brings home the fact that hard rock was really only one of the film's many targets – everything from Merseybeat spoof ‘Gimme Some Money’ to showtune ‘Saucy Jack’ is gleefully brought to the fore this afternoon. Aside from a bargain basement recreation of the ‘Stonehenge’ scene and David St Hubbins’ quip that “it’s no exaggeration that without Michael Jackson, there would have been no Spinal Tap”, it’s kind of hard to really say that anything particularly funny happens, but maybe the band’s dirty little secret is that real or no, they’re actually pretty good songwriters – ‘Big Bottom’ in particular is ridiculously anthemic, its simple, dumb, declaration of fondness for junk in the trunk a joy to sing along to, not least thanks to a Mr Jarvis Cocker, stepping in for some cheeky bass duties.

If there is a more enthusiastic man on the planet than Dizzee Rascal DiS probably doesn’t want to meet him, as we'd probably just punch him in the face screaming ”what have you got to be so fucking happy about?” As it is, Dizzee’s almost supernatural ebullience could probably make you forget you had just minutes to live, let alone sleep deprivation and a bit of a hangover. The first half of his set is particularly breathtaking, most notably a rewired version of The Ting Tings’ ‘That’s Not My Name’, a freestyle battle over MIA’s ‘Paper Planes’ with, um, some dude (DiS is reasonably certain it’s one of N*E*R*D), an old skool ‘which side of the crowd can shout louder’ contest... man it’s fun. A Michael Jackson homage that simply involves the DJ playing the intro to some songs off Thriller is lame, and the second half is dominated by ultra-populist new stuff that doesn’t really stand up to his Boy In Da Corner days, but it’s really very enjoyable. The cherry on the cake? The lack of a Calvin Harris cameo, thank fuck.

Crosby, Stills & Nash look like such nice old men... DiS sort of want to run up to the stage screaming “will you be my granddads?”. It’s hard to exactly be reduced to paroxysms of astonishment by their uber gentle ways - not least because of the astonishing fireshow put on by their wayward sometime colleague Neil Young last night - but their honeyed harmonies, archaic-anywhere-but-Glastonbury hippie sentiments, and a frankly delightful cover of the Stones’ ‘Ruby Tuesday’ help us slip comfortably into the early evening.

Which is just as well, seeing as how immediately beforehand DiS' phone burped up a text from Sean stating Bruce Springsteen was onstage with The Gaslight Anthem. Tried to hotfoot it over, but was unfortunately eating a delicious halloumi cone on the other side of the site. Oh well. On a sidenote – good food this year.

Go and sprawl in The Park for a few hours, palsied constitution finally agreeing to accept some alcohol. Hits us that The Park – with its hip indie band and quirky folk act music policy, Bimble Inn, Rabbit Hole, giant flowers and assorted wacky sundries – is basically just Bestival in miniature. Not saying it’s a rip-off (Bestival owes far more to Glasto) but there’s a fair dollop of déjà vu. Also a pinch of fear – what the shuddering fuck was that sand sculpture of Michael and Emily Eavis about? Genuine concerns that it’ll haunt me to the grave. Anyway, time for another set of no-longer-a-surprise guests: Klaxons. They’re clearly having an enormous amount of fun, and have also taken to trouble to dress up as characters from Tim Burton films (Beetlejuice, Edward Scissorhands and the Hessian Horseman from Sleepy Hollow). Which is cool, and enjoyable, and I really wish I could bottle the feeling of sitting on a beautiful green hill under a perfect blue sky, with ‘Golden Scans’, ‘Magick’ et al pouring out tunefully... and yet it all feels a bit slight, just perky, pleasant pop that now feels fairly unremarkable where once it embodied some sort of zeitgeist. New songs may or may not get played – have a problem remembering what any of the Myths Of The Near Future album tracks sound like now – but certainly the allegedly wildly uncommercial deep psyche of their rejected second set appears not to get an airing.

And then it is time for Bruce Springsteen & The E Street Band. So many, many words have been written about their live show over the years that it’s kind of hard to know what to say – The Boss is an immaculately preserved human dynamo, a charisma-blasting Dorian Gray to his rather more portrait-like band. He runs. He jumps. He pulls a sex face when he solos. (He solos often). He adopts a PT Barnum-style mad huckster persona while addressing the crowd ("you've just seen the hard-rocking, Viagra-taking, heart-stopping and history-making E! Street! Band!"). He doesn’t so much crowd surf as apparently just walk on top of the audience, or at least that’s how it looks from where we’re standing (not too far back, but far enough we have to use the big screens due to the profligacy of arseholes with 20ft flagpoles standing right at the front – some twat with a Man U banner is going DOWN if I a) ever meet him and b) he’s quite a lot smaller than I expect). It’s astonishing, stadium rock actually turned into a force for good.

Or at least, that’s how it feels as a Boss fan, an expansive set that sweeps fiery eyed between Born To Run’s ‘Thunder Road’ and title track, right up to the better bits of this year’s Workin’ On A Dream, finding plenty of time for ‘Badlands’, ‘Because The Night’, ‘The River’, a titanic, electric ‘The Ghost Of Tom Joad’ and opening Joe Strummer tribute ‘Coma Girl’. If – like some of DiS’s friends – you’re not a Boss devotee, you can kind of see why it was gruelling at times, given he doesn’t go out of his way to crowbar in some better-known songs. Still, by the time the official curfew has been thoroughly disregarded (Bruce: ”Hey Steve – if it ain’t curfew time, what time is it?; him out of The Sopranos: ”IT’S BOSS TIME!”) there’s very few souls in the field not completely overridden by the triple closing whammy of ‘American Land’, ‘Glory Days’ and ‘Dancing In The Dark’. Astonishing, and for another 24 or so hours DiS is thoroughly convinced nothing is going to top that. I think you know who I’m talking about.

Still not feeling astonishingly well, we shuffle off to our spiritual home of Shangri-La to see the Africa Express Soundsystem at Club Da Da. This shit is peculiar. Boggle-eyed gurners stare in wonder and horror at the giant puppets of an African family who strut about the venue, freaking the hell out of basically everyone. It is basically impossible to work out who might actually be on stage, seeing as how it’s strewn with moving dummies and a seemingly constant stream of musicians tuning up. So confused that we wonder if the show might not have somehow started, but eventually lights come on, vocals well up, and an almighty polyrhythmic groove gradually seizes hold of our attention and limbs. The MC’s continued assertion that this is a two hour set is mildly annoying (yeah, it would have been IF YOU’D NOT STARTED 45 MINUTES LATE), and the onstage sleb count is lower than expected (we count Schlomo and DJ Yoda, no Damon Albarn, no sign of Tinariwen, Baaba Maal), but fairly sure the point of all this is to dance to some good music, and that we do.

Lines of speed are now on rotation, rather amusingly. Sheer tiredness, a hitherto unsuspected sense of restraint, and flashbacks to a teenage amphetamine freakout flutter through DiS’s tiny mind, and we instead opt for the kindly offer of a valium and lurch off to an early (well, 4.30ish) bedtime. Good day.