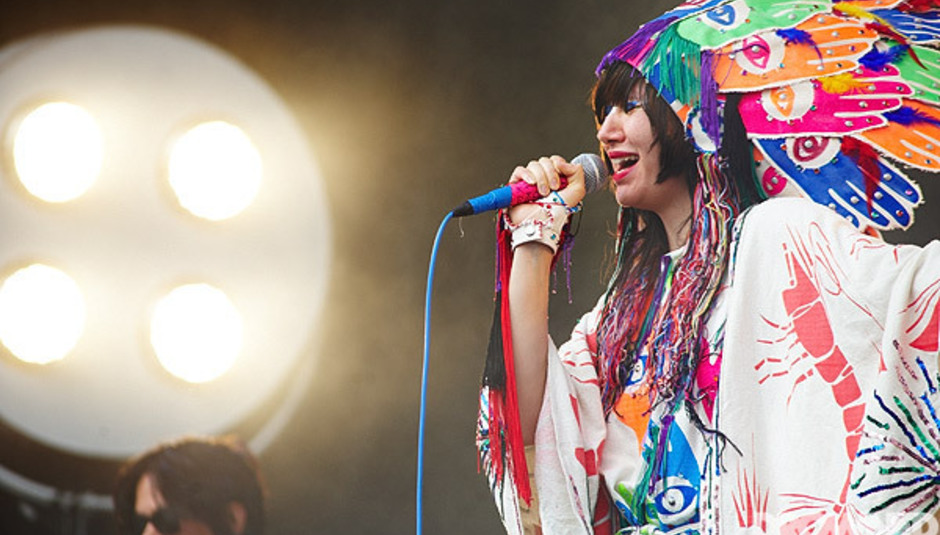 The concluding part of DiS' Andrzej Lukowki's adventures at Glastonbury 2009.

Man, valium’s good. Managed something like five hours of sleep and feel like, um, well, not death. Haul self up to see Micachu & The Shapes’ noon day set. ‘Tis very good – for all the ridiculous tunings and alleged abrasiveness, can’t help but feel the entire point of their music is the grooves and beats constructed out of these rough sounds – it’s not sweet or hummable, it’s entrancing. Awesome avoidance of the Glastonbury spirit too, as Mica Levi politely introduces final song ‘Golden Phone’ with the words ”thank you so much for having us Glastonbury. Here’s a song about suicide.”

Lurk around The Park in a vaguely aimless way: top tip for next year is the £4.50 nachos; these muthas are the size of your HEAD. Catch snatches of Chief (sort of folkish blitherers, repeatedly tell us they’re from LA), Alberta Cross (sound a lot less hollow live, shameless big gestures quite invigorating while relaxing in early afternoon sunlight) and – shamefully – one band of the entire weekend I catch on BBC Introducing, some Mancunians called the 1-2-3-4s who are, admittedly, friends of a friend, but are pretty good, squalling diva-garage type thingy, definitely worth checking out their faster songs. Er, is that a jag? Probably not.

Matters get more serious with Yeah Yeah Yeahs, who are about as godlike as you’d expect. Karen is dressed like a sort of psychedelic shaman, replete with a headdress roughly the size of the rest of her body, and leaps, poses and skips her way through by far the best YYYs set DiS has ever seen. It’s not like they’re doing anything so different to their dates back in April – similar choice of songs, same eyeball backdrop – but they plough into it with a vigour that speaks of a now finely-drilled unit, sucking up the energies of the colossal crowd (they're on WAY too early, but it works) and hurling them back out, almost literally so when a giant blow-up replica of the eyeball emerges from, er, somewhere and sparks some medium beachball jollies. Yeah, it’s fair to say that the band are basically doing what they always do, but you can’t just go through the moves with a performance like this, the spiky rush of finale ‘Date With The Night’ finally grounded as Karen and Nick smash up their mic and guitar in tandem.

Bat For Lashes were never really going to be able to complete with that; the music’s not nearly so energetic and while Natasha Khan has some nice moves and a phenomenal larynx, she’s simply no Karen O, like a really fast car next to an intergalactic rocket ship. Still, get to the Other Stage’s central sweet spot (the sound tends to be rubbish if you stand even a couple of dozen metres left or right of the line between stage and mixing desk) and the bottom end is relevatory, bass and drums shaking and roiling like deep, tribal thunder, Khan’s voice soaring around and above with astonishing grace. Breaking out the single version of ‘Daniel’ is a good shout to conclude, an appreciative field but static field finally being given an excuse to do some moving. At a slight loose end and concerned that we’ve seen all too many bands so far, we head to Trash City to participate in live art installation/project/thingy You Me Bum Bum Train. Have to queue outside for an age in front of a quartet of loud, fat children. Grr. Contemplate giving the 11-year-old boasting about his crack intake (hmm) a half-valium to shut him up. Probably entering sliiiiiiiiiiightly dodgy territory there. Fortunately they get chucked out for being too young. Anyway, not to bore you with a live art review, but the YMBBT is an immersive but somewhat disjointed experience that's not super-successful as a piece of art, but fun, and a reminder that Trash City and Shangri-La are not solely places for getting obliterated in when the bands stop. It does overrun though, rather annoyingly cutting into Nick Cave & The Bad Seeds time; turning up during ‘The Mercy Seat’, the sound seems a bit muddy, the crowd noticeably kind of sparse. Despite Cave’s household-ish name status, it’s conceivable that a man bellowing graphic songs about slaughtering entire villages doesn’t fit in that well with the whole, y’know, vibe. Some people seemed to think it was amazing though, and Latitude will be for sure, but let’s put it this way: they don’t give Blur too much of a run for their money. Not that, in retrospect, anybody could, not even Bruce himself. I’d seen them twice before, back in the Nineties, and wasn’t necessarily as thrilled as some at the mere prospect of hearing Blur songs, but oh my god. The one, perfect, will-never-leave-me-to-my-dying-day memory I had of seeing the band before was aged 15, at V97, Damon assuming the crucifix position in front of a flood of incandescent light as ‘Sing’ ebbed gorgeously from the speakers behind him. There’s no ‘Sing’ tonight, but virtually every song is on a par with that instant: ‘She’s So High’ and ‘Girls And Boys’ opening the set, years of indie disco wear and tear not dulling them a jot; a Phil Daniels-powered ‘Parklife’ dispatched at punk rock speed; ‘Oily Water’, elevated from moderately atmospheric album track to hauntingly chaotic meltdown; a ‘Tender’ so immense, its loftily lovely sentiment powered by such a crisp, kinetic, sway-along bottom end that when Blur leave for an encore several songs later, the audience doesn’t bother to clap, stamp or shout – we just start singing ‘Tender’ again. There is no need to say anything about finale ‘The Universal’. We are hugging. We are waltzing. Childhoods are being fired back at us. Some of the greatest songs of the last two decades are freed from the absurd context of Britpop, tracks from every single album strewn like a carpet of riches. Even if it was their own fault it feels utterly laughable that anyone was even insulting enough to bother comparing them to a band so utterly inferior as Oasis, a band who had an album out last year but are shackled to the past in a way Blur never will be.

I’m going overboard here, but it’s that type of night. A bunch of milk cartons wander past us immediately after ‘Coffee + TV’. I haven’t even started on ‘Trimm Trabb’ or ‘For Tomorrow’ or ‘Badhead’. Perhaps the best I can end with is that the saucer-eyed Damon Albarn is as out of it as anybody here, barely able to string a coherent sentence together when addressing the crowd, and yet he throws all his fucked up, arty smarty, has-no-need-to-be-doing-this-for-money heart into the whole thing, and he fires through every song, word-perfect and passionate. At one point he simply falls to the ground crying. I don’t know exactly what’s going through his head, but on some level we’re all feeling it too.

Feels a bit bathetic to wrap up by adding much, but we head back to run the Shangri-La Secret Bar, rescue a few people from the rain, dance like bastards, eventually sloping to bed sometime after sunrise. Glastonbury’s such a huge entity that attempting any meaningful summary is kind of pointless when one reviewer and a photographer can barely graze the tip of the iceberg. However, it's hard to dispute this being a very good year for the festival, the grumblings about the Pyramid headliners being too old having barely survived the initial announcement, a trio of universally-hailed performances up against a wealth of other stuff that was probably great too (er, apart from Black Eyed Peas, one assumes). The Thursday felt a bit buggy and could probably do with a rethink next year, and if flagpole vendors could be barred from/buried under the site that’d be swell, while with no desire to start a fight with the hepcats at Q, the on-site publications are a little on the vapid side. But all round a hale, hearty festival, with good bands, a handful of genuinely sensation performances, and nightlife as good as it’s ever been. Plus we didn’t bump into Jo Whiley, thank fuck.

Alt. Country Week: A DrownedUp of the...