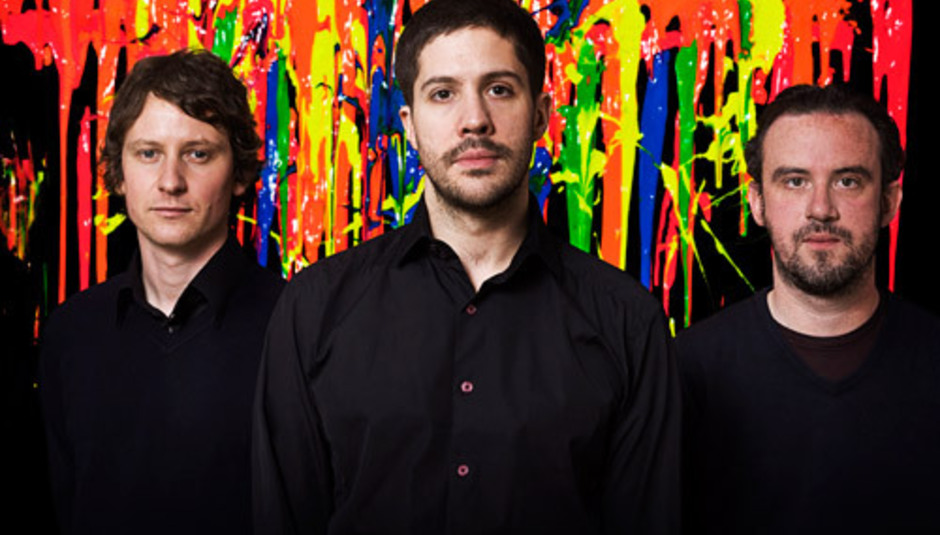 About a month ago the indieverse heaved a collective "oh yeah, I remember them, they're good, they are" as critically-acclaimed noveau-shoegazers Engineers announced their second album Three Fact Fader, the belated follow-up to 2005's self-titled debut. Singer, guitarist and bassist Mark Peters talks DiS through its Kraut-tastic sequel; stay tuned for Dom Gourlay's review next week.

I bought Musik Von Harmonia by Harmonia after having it recommended to me by Barry, the singer from the sadly now defunct Clor who we were touring with at the time.

[Drummer, Andrew] Sweeney loved the opening track 'Watussi' and suggested we write our own song around a sample from it. The producer John Leckie heard an early demo of it and his enthusiasm encouraged us to finish off writing it. It's a great song to play live - it's really rushy and reminds me of many hedonistic nights we've had together over the years.

We went on a tour of Europe and played Neu! 75 and a Pixies compilation a lot in the van. When we returned Dan [McBean, keyboards/guitars] brought a rough demo to the studio which we worked up into the song it is now. It sounds like a break up song, but I think it's more about the eureka moment that you experience when you stop doing something that's making you unhappy. It was good fun recording the guitars for it at Rockfield.

This was written in the week of the terrorist attacks on London in 2005. I was stranded in the studio in Kings Cross and wrote the music for this and about three others. Sweeney joined me later after the panic subsided a little and added the vocal melody. We decided it should sound a bit like Sonic Youth covering Crosby, Stills and Nash. The lyrics are inspired by a documentary on Sweden's problems with hard drugs.

This is the track that most reminds me of our studio in Rainford, Merseyside, surrounded by the uncomfortable combination of industrial noise and agriculture. You can hear a wood pigeon on it if you listen carefully. This is the first track on the album to feature the Knife Edge String Quartet, the recording of which rates as one of my favourite days ever in a studio. The lyrics are Sweeney's lament for medical science to be used more for good as opposed to it being subverted for immoral gain.

5. Brighter As We Fall

If there is a straight-ahead love song on the album then this is it. It's also the most simply constructed sonically too, consisting of just guitar, bass, drums and one vocal. I had to leave the building when Dan was recording the guitar because it was so loud. It's a great take though, as is Simon's moving vocal.

I came up with the rough demo for this after finding out we were booked to play some shows in New York. I got on a bit of a geeky Velvet Underground tip and wanted to have a song to play live that would soundtrack my musical fantasy of NY. Needless to say the reality was a little bit different... We tried an almost glam version, an acoustic take and Metric engineer/producer John O'Mahony did a mix before we completed the album version with Ben Thackerey.

7. Crawl From The Wreckage

We were listening to Joe Henderson's 'Earth' and liked the feel of the drums and bass so decided to create a track inspired by it. This has my favourite drumming by Sweeney on the album on it, and also features some lyrics inspired by the poetry of Dylan Thomas. We had a lot of fun messing round with [producer] Ken Thomas's cheap Eighties Casio, sampling keyboards on this at the now closed studio Jacob's in Surrey. The Chameleons recorded Strange Times and The Smiths recorded The Queen Is Dead there. It was almost certainly haunted.

This is one of our favourite tracks on the album. I was listening to an album by Ornette Coleman on the way to the studio called Forms And Sounds which is made up of pieces by classical musicians improvising on different scales. I thought it would be interesting if myself and Dan had a go at this on guitars, so when I arrived we gave it a go and after listening back to it, we cut our favourite part out and composed a song around it. Another rushy one to play live, I'm glad I get to play bass on it. The lyrics are about the death of a musical scene, which is ironic given that we wrote this a few years ago...

This is about a good friend of ours who probably holds the world record for having the most songs written about him by spacerock bands from Wigan. I think it's as much about parting ways with your old self as an old friend. Dan and Sweeney wrote it in a freezing cold attic room whilst Simon and myself were doing a short promo tour. Hats off, it was horrible up there.

I think this is probably our favourite song on the album. It was written after Sweeney's girlfriend was rushed to hospital. We wanted to simulate the feeling in a speeding ambulance and all the emotions you feel on the way. The chorus is a Swedish greeting and the strings have a bit of a Scandinavian feel to them too. I don't think we did too bad a job considering that this was the first time we'd ever arranged a quartet ourselves.

This carries on the semi-classical theme with Simon's trademark vulnerable and eerie vocal before exploding into an intentional pastiche of Seventies stadium rock. The war in Afghanistan was breaking out so given the portentous vibe of the music, I thought a lyric ruminating on the ownership of territories was entirely suitable. I may well live to regret it. I love the tom rolls on this one.

I wrote this after a testing conversation with our manager and I became interested in the idea that the status that being successful brings is more important than the music itself, and how you encouraged to present yourself in a glossy 'souped up' way. Recording this was really good fun though and we used the same Hammond organ that Pink Floyd used in the seventies. We put the vocals through the leslie cabinet and I swear you could hear 'on the run, on the run' faintly as it revolved...

13. What Pushed Us Together

This is our 'electro Motown' track. I think the upbeat music working against the downbeat lyrics is typically Engineers.