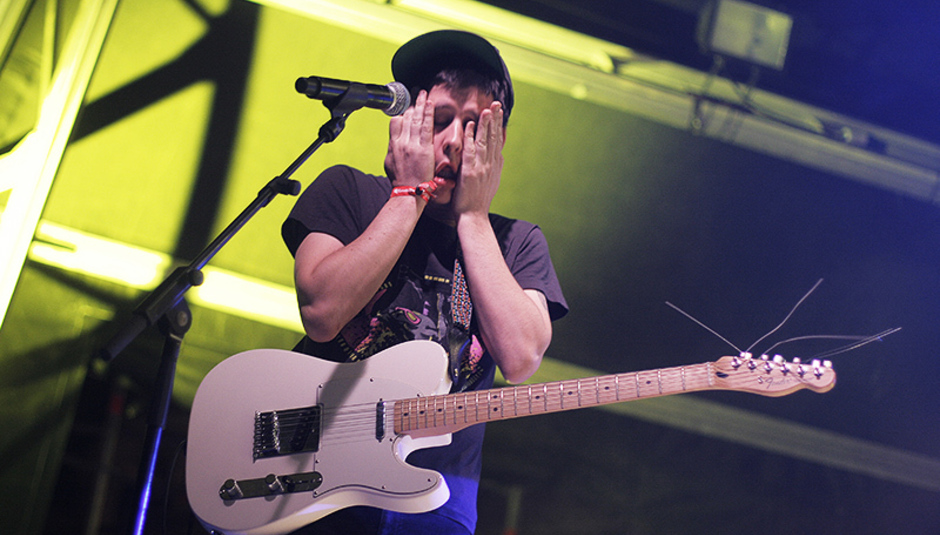 DiScuss: Is this News? - Yours Truly, Indie Mob

DiScuss: Is this News? - Yours Truly, Indie Mob

I didn’t go to Primavera Sound last weekend. Too skint. And although I’ve masochistically perused the geyser-like spumes of adoration on the DiS thread about the festival (er, I actually started said thread), I’ve haven't read any actual reviews yet, either.

All I really know for a fact is that sometime after 2am last Friday morning, a young musician by the name of Nathan Williams – aka Wavves – had something of an episode, going loco on the middle sized Pitchfork stage, chucking shoes, fighting his drummer, baiting the good people of Catalunya, and generally putting on a kinda crappy show.

Or, to put that into perspective, a really really obscure indie musician played a bad gig in the small hours of the morning, at a festival that must have boasted at least a hundred bands with greater expectations on their shoulders.

And it became news. Within the online music community/blogosphere it became BIG news. Pitchfork overlord Ryan Schreiber twittered about the brouhaha as it happened, following it up the next day with a scathing seven paragraph breakdown of the set, which thus far stands as his only editorial on the festival.

Around the same time, the hapless Williams posted a distressed online apology in which he owned up to being not well and taking a somewhat inadvisable cocktail of drugs prior to his performance. In an utterly futile gesture the note was taken down shortly thereafter, but you can never retract these things from the web, and soon the bit about the drugs had merrily combusted with the most powerful indie journalist in the world's denunciation, and boom – instant scandal.

All the major music websites, DiS not excepted, ran with the story, many running further editorial content. NME took it perhaps the furthest, with a strident blog in which William’s antics were compared to those of Lemmy, Steve Tyler, Sly Stone, The Who’s Keith Moon, Pete Doherty, the dude from Creed and even Elvis.

I shall say it in the clearest tones: why the fuck is this news? I’m not even the first to compare the manner the online community received it to the whole is she/isn’t she a mental farrago that was playing out with Susan Boyle at the same time – those plaudits go to The Idolator. But unlike Susan Boyle or Elvis, Nathan Williams isn’t famous. The odds of his presence on the bill influencing anybody’s decision to attend Primavera are virtually nil, while it’s notable that the subsequent cancellation of his European tour – ie, the thing that would actually upset more actual Wavves fans – was by and large only mentioned as a footnote, the 'main event' having happened. And the event was nothing. Obscure musician plays poor show. Fairly humdrum drugs involved. Woo.

But news it became, and I think the worrying parallel ‘tween music websites and the tabloids – and it IS only music websites, you will not find a word about poor Nathan's antics in the print press – is that both can be whipped into hysteria over nothing, and whipped easily. Yeah, you could easily say this has been going on for decades, but think of the trajectory of this thing: Ryan Schreiber twitters. He follows up with an article. Everybody else follows suit.

Now it’s not unreasonable that Schreiber – a man whose website is broadly responsible for Wavves’ small measure of success – would be interested in events onstage. But the fact it’s spread into a cross-web clusterfuck – generally reported entirely seriously as if it was Big News – feels, I dunno, not right. Twitter reports become instant headlines. NME.com – surely the worst offender - hysterically pounces on even the slightest whiff of music-related news, notably in its classic ‘(x) to split!’ stories, wherein the actual article inevitably reveals the touring keyboardist has gone back to their day job. DiS’s combination of low manpower and DEFINITELY NOT A COP-OUT irony in our news coverage somewhat shields us from this world, but we’re far from exempt.

So here is the DiScussion: should the indie online press – who I’d imagine to a person consider themselves morally above the gossip pages, tabloid rags and freesheets that cover equivalent events to the Wavves meltdown in the ‘real world’ – feel any sort of responsibility to keep perspective and balance in their reportage of such matters? Or is it just a harmless bit of fun? Or good online business? Are we basically Pitchfork's bitches, unable to pass a story they deem to be big news? Or have I wildly missed the mark in suggesting the incident – barely commented on in the actual Primavera thread – wasn’t a big deal? We’re all familiar with the build ‘em up, knock ‘em down cycle, but is it in any way fair that Nathan Williams is going to be saddled with a rep for years - if not his entire career – because Ryan Schreiber sent a couple of tweets as something to do?

It was Wavves ferchrissake. Wavves!