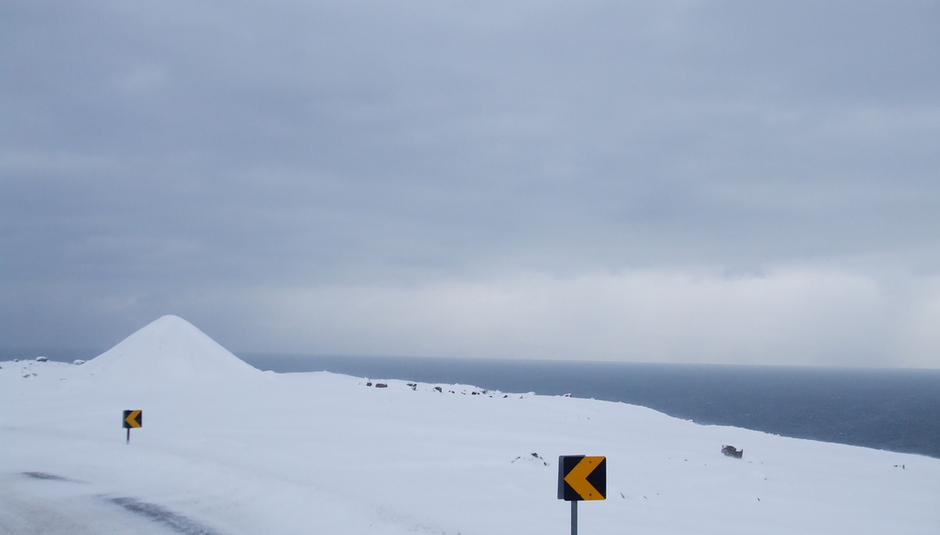 Adventures at the edge of the world: DiS goes to Aldrei Fór Ég Suður

Adventures at the edge of the world: DiS goes to Aldrei Fór Ég Suður

Shivering on a sand spit deep in the recesses of the Skutulsfjörður fjord, and overshadowed by the mind-boggling obstacle of a skyscraper high glacial wall, to the eyes of a foreign city dweller the north-west Icelandic town of Ísafjörður looks like a faintly ridiculous gesture of defiance against Mother Nature, the urban planning equivalent of showing the finger to a tiger that’s chewing your leg off. It’s the type of place of which you’re probably meant to say ‘nobody in their right mind would stage a major national music festival here; but... THEY DO!!!’

But this is Iceland, a country with a population of just 320,000, almost all of whom have been to music school, most of whom form some sort of band, many of which become comparatively famous. That’s a lot of bands to go round, and with a population of 4,000, Ísafjörður isn’t so small a town by the country’s standards, with another 3,000 in the surrounding Westfjords district, and Reykavik just a short plane journey away.

Moreover, the nearby village of Súðavík is home to a celebrity of sorts, in the form of Örn Elías Guðmundsson, better known to just about everybody as Mugison. The laptop’n’roll singer returned to the fjords of his birth some years ago, and for the last five he’s been running the free Aldrei Fór Ég Suður festival (literally ‘I never went south’) with help from various locals, most notably his father, Papa Muggi, harbour master to Ísafjörður and also, oddly, a professional karaoke singer.

This is maybe all sounding like the back story to an elaborate comedy drama, and in truth DiS’s experience this Easter weekend gone was more like a baffling but for the most part charming guided tour through the ins and outs of life in the Westfjords than anything resembling a trip to a music festival. However, you probably didn’t tune in to read about a journalist’s free holiday, so let’s talk about some bands, which were many, and varied.

Every act gets 20 minutes, there are no soundchecks, the running order makes little concession to relative fame or talent (apparently Blonde Redhead were thoroughly bemused when Mugison lured them up a couple of years back), and licensing is such that it makes more sense to stand in the main area with a crate of store-bought alcohol that to cram into the tiny bar. And given more or less the entire population of Ísafjörður comes along, regardless of their interest in actual good music, we end up with a frantically weird situation in which the biggest draw of the entire weekend is footballer turned Icelandic TV personality Hemmi Gunn, who basically offers up some bad cabaret and is treated like a hero for it.

Anyhoo, given Iceland’s microscopic population yields up a good 40 or so bands this Aldrei, it’s inevitable that quite a lot of awfulness ensues, so let’s not bother turning this into a slagging off of unsigned teenagers. Well, except maybe Brot. Nu metal bands should always be named and shamed.

It terms of band to genuinely look out for: Who Knew sound an awful lot like Wolf Parade, to the point it seems hard to believe frontman Armann hasn’t actively pinched his schtick off Spencer Krug. This is not a bad thing. Everyone should pinch their schtick off Spencer Krug. Epic and intense, but balanced by skewed harmonies and wonky keyboard drifts, they have a real fire and sense of purpose - it seems unlikely this island will hold them for long. Sin Fang Bous are a name Icelandophiles may be familiar with, and deservedly so: their sprawling, wistful, gently electronic shanties are utterly lovely, like a friendlier, bleepier Arcade Fire live, and just a shade cosier on record. Their album Clangour is on Spotify and you should listen to it. A lot.

Both played the first day, which was rounded off with some fine star turns from múm (majestic, shimmering, and thoroughly lovely, but in a larkabout way – they’re not here to show anybody up) and FM Belfast, who manage to wangle a 40-minute set by virtue of being the last band on and duly reduce the wasted remnant of the festival to a lurching frenzy with their wryly anthemic blooping. ‘Underwear’ is a CHOON.

Day two, which is possibly themed around heavier bands isn’t quite so fun, though Mugison turns in a solid (if very early) set of straight ahead rock’n’roll. Vicky are pretty fun if you’re in the market for some precision despatched girl grunge with a few eccentric spoken word flourishes. MySpace would suggest that one of their songs is called ‘My Black Lesbian Lover’, which is cool. Er, maybe. Mammút are one of the more buzzy bands of the weekend, but come across a bit children’s screamo, despite the odd gorgeous harmony hinting at something more. DiS was intrigued enough by the love that we checked them out on MySpace and can confirm that they’re a lot better on record, a dark-tinted pop act who’d basically walloped their songs into a metallic pulp live.

Oddly (or not; if you’ve missed the general subtext here then Iceland = bit eccentric) the best act of the second day is actually the local choir, who are augmented with thunderous drums and rock guitar and generally sound a bit terrifying, in a sort of The Omen meets Judas Priest meets Songs Of Praise way. There’s probably a serious point to be made here about the fact choirs are invariably treated as stooges, flunkies or special effects, though I’m not quite sure what it is: ‘readers, if you have 30 friends who can sing close harmony, form a metal band’ is probably pushing it a bit.

And, you know, that’s it, good bands wise, but the level of filler is almost the point. Most festivals pay their acts, most festivals aren’t in the middle of nowhere, most festivals give short sets to the obscure bands and long sets to the famous ones. Aldrei is (almost literally) a world away from all that, and I’m still a little vague on whether DiS was invited out in order to boost the profile of Icelandic bands by reporting back highlights, increase the profile of Aldrei, or simply as a slightly elaborate networking opportunity; certainly at present www.aldrei.is isn’t overly helpful for the itinerant English-speaker hoping to come visit.

But certainly it was a joy to be there; a free festival that essentially exists as a result of civic pride and a national love of music is an inspirational thing indeed, something that the UK is perhaps sadly a bit beyond (for logistical reasons, as much as anything - see Fatboy Slim’s 2002 Brighton Beach gig). All I can really conclude is that one, Iceland really does have a lot of good bands (though that’s somewhat bulked out by large quantities of dreadful ones we never hear of); two, the Westfjords are very beautiful, very charming, and certainly worth the deviation from Reykjavik should you be in that neck of the woods; and three, Aldrei is an immensely entertaining couple of days and isn’t as inaccessible as it might appear, especially with the Icelandic economy on its downers. The most curious guest was a guy from Suffolk called Alexis, who’d hauled himself up at a couple of weeks’ notice after YouTubing ‘world’s most dangerous landings’, seeing footage of a plane touching down in Ísafjörður in a storm, and deciding to come up for himself. Within a couple of hours arrival he was drinking beers with Mugison himself. Which makes total sense, if only in Iceland.

"The best thing we did for our career...