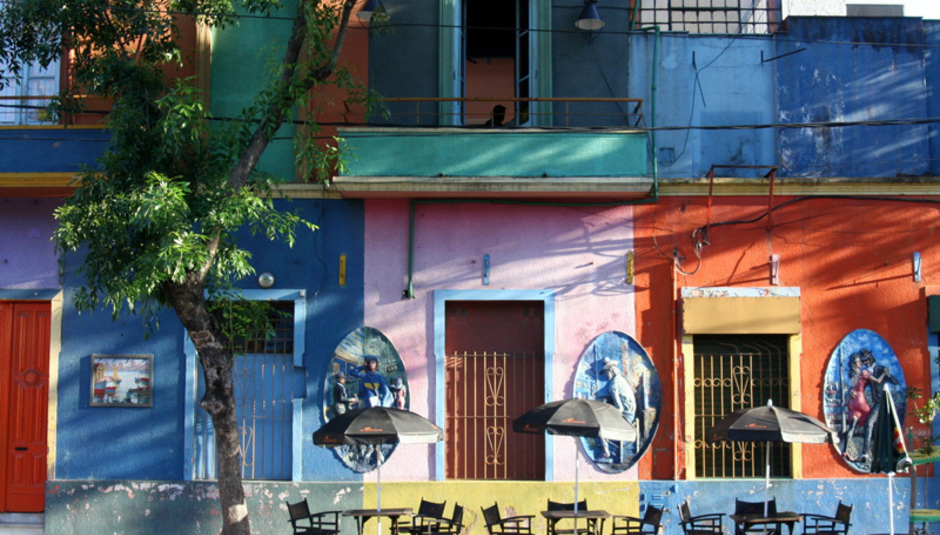 Metric have lived and spent a lot of time in some of the hippest cities in the world, in fact, they're one of the most city-shifting, transient bands we've ever met. Each day this week they're going to share their favourite things about each city they've lived in or visited. Next up is the bands songwriter, singer and synth-thrasher Emily Haines, walking you through Buenos Aires, where she she wrote the bulk of forthcoming album Fantasies.

Buenos Aires is one of my favorite cities on the planet. I went there last year for the first time, knowing no one, and have since returned five times to live and to write. If you want to go, I really suggest getting yourself an apartment in the Palermo Hollywood neighbourhood. You can rent by the night/week/month and not be stuck in a hotel room feeling like a loser tourist. This website, www.apartmentsba.com, is good for finding reasonable places. There are a lot of lame condo high rise apartments popping up in Buenos Aires which I would avoid if I were you. Set your sights on a more interesting apartment and you will find one.

I lived for a while at Los Silos Dorrego, which is literally old silos and agricultural buildings turned into apartments, but these were not listed for rent anywhere, I found it through friends I met. Lots of actors and musicians from all over the world stay there short term, there's a really sweet little cafe by the pool and no two places in the building are the same. If you can't find an apartment or would prefer to stay in a hotel, I would suggest Hotel Home on Honduras which is just a few blocks from Los Silos Dorrego. Honduras is a great street that runs all the way through Palermo. The side-walks are cracked and you may step in dog shit or be asked for money but that's because Buenos Aires is a real city, not a pedestrian mall aimed at squeamish tourists. Having said that, you will still encounter lots of places in Palermo that are aimed at visitors. This isn't always a bad thing but all too often means you will find yourself going for drinks at some place that looks like a website. My advice would be to not settle for those places. Look a little closer and you will find something better.

There's a bar on Honduras called Om which is somehow invisible to roving lager louts drunk on their strong currency. You can get really nice cocktails there without feeling like a jerk. As for restaurants, there are so many good ones it is hard to make a definitive list. Here are some of my favorites:

Onto live music: Argentina is known for the Tango but I didn't really get into that as I was travelling alone and was not in the mood for accordion players or passionate dancing. Instead I sought out the scrappier clubs in town. Salón Pueyrredon on Av. Santa Fe 4560 in Capital Federal is a great punk club where you can drink Fernet y Coca till your head spins. The best concerts I saw were on rooftops (a teenage Broken Social Scene cover band!) or in people's living rooms (a mosh pit!) so be sure to keep your ear to the ground.

If you aren't too hung over to enjoy some daytime culture, I would highly recommend visiting MALBA - Museo de Arte Latinamericano de Buenos Aires on Figueroa. They always have really interesting new exhibitions and the cafe there is a great place to hang out and read. The parks in Buenos Aires are also beautiful, with massive trees and lots of grassy patches for picnics. I spent a lot of time in the parks around Recoleta Cemetery, soaking up the sun and the death. It's worth wandering around Recoleta and taking in the architecture, this is the part of the city that looks like Paris.

Sometimes doing the obvious thing gives you insight into the big picture so while you're there be sure to find time for The Obelisk of Buenos Aires. Go to the Panamericano Hotel at Carlos Pellegrini 551 and head up to the rooftop pool. You can pay a nominal fee and hang out there all day, swimming and trying to wrap your head around whatever demonstration or political event is stopping traffic below. From there, you can also see the famous opera house Teatro Colón, which has tragically been closed for renovations every time I have been there. Also nearby there is a small seated venue where I saw the incredible singer Mercedes Sosa perform on my last night in town. She sang 'Bésame Mucho' and made everyone there feel like they were the only person in the room.

Hope this serves as a decent introduction, I am keeping my best discoveries to myself as I am a bit protective of my hideout. Visit Buenos Aires with an open mind and you will discover magical people and things. Before you go, it might be a good idea to rent Naomi Klein's documentary The Take thetake.org. It wasn't so long ago that citizens of Argentina were banging their fists on the doors of their banks, having been told their savings had suddenly evaporated. Sound familiar? They also reclaimed their lost jobs from closed factories and restarted the failing economy. On your way to and from the airport, take a look at the slums beside the highways. Buenos Aires is a world class city like London or New York, with plenty of poverty to prove it.

Adventures at the edge of the world: ...