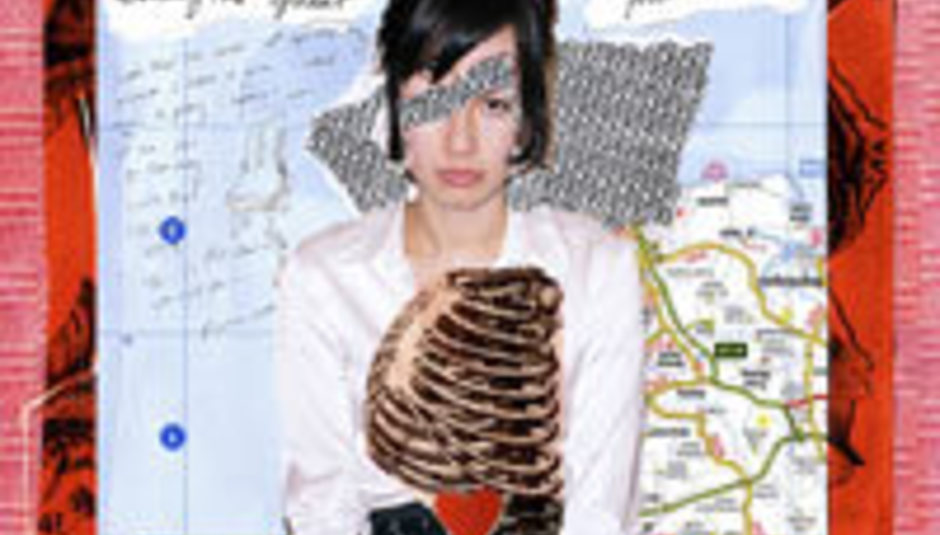 The idea of a DiSection is simple: We ask an artist/band we like to walk us through their album, track-by-track, not unlike those director's commentaries you get on the bonus bit of a DVD. Here, Emmy The Great talks us through her debut album First Love, which is released today and kicks off DiS' special Emmy the Great Week!

Emmy's disclaimer: When I say ‘us’ in this thing, it is Tom, Euan, Pete, Ric and I. Tom and Euan and I co-produced the album with the help of the Earlies, and the others are part of the band and made big contributions. Like I say at the end, there's no reason why anyone would find this interesting other than me. Suggested reading for the very bored.

Our album was recorded in Lancashire with the Earlies and mixed in Glasgow by Geoff Allan. This song was the first to be sent off and it was mixed so quickly we hadn’t even left for London when we got it back. It was the first warm day of spring and we all went out for ice-cream while I quietly fretted that it sounded too clean. The amount of pointless shit I fretted about it is truly amusing. Geoff remixed and remixed songs and we always reverted back to the first one. By the time we got to mastering I had established that my ears were completely useless and was using my eyes to make decisions on the sound.

Semay, the cellist from the Earlies, came in one day and put two amazing cello chords on either end of this song. After she was done, Tom told us that they were the kind of chords that he thought of as mouth-watering, because they were thick and low. It was the first time that I thought about the way people identify with music, and how it might be different to how I do it. I’ve always just separated things into categories according to lyrics or the way a song is written, but Tom is much more emotional or even physical about sound. He feels everything in his gut. Euan is even weirder - while we were recording he told us that he has a colour for every chord. It’s not quite synaesthesia but that’s just how he thinks about music. Since finding this out, my own code for listening to stuff is all messed up.

We Almost Had a Baby

I hate when people talk about what their songs are about and cut off the possibility of the listener having their own story, but I think this song is pretty self-evident. Personally I almost died when I found out 'Don't Worry Baby' (YouTube) was about a car and 'Across the Sea' (YouTube) was not about me.

A few months after we finished the album, Tom and I went back up to Colne to visit the Earlies and eat some classic Lancashire tacos. The next day on a walk we found this lake that was so perfect and still it looked like the Afterlife. The picture that I took of it is exactly the image I had in mind when I was writing 'Easter Parade'. Lancashire came after the songs, but really they shouldn't have been recorded anywhere else. Colne is this perfect hillside town, where the Earlies are the top dogs. On Tom's birthday we went to the local pizzeria, because we knew that anyone who's birthday it was got a little tin foil swan with a candle in it, and a rousing chorus of happy birthday over the restaurant stereo. Clearly everybody else in there was aware of this too, as we were one of about sixteen birthday parties that night. I reckon it was just something people liked to do on a weekday when they're bored, pretend that it's their birthday at the pizzeria, but anyway, the point of this story is that the next day, we found out that the people singing Happy Birthday on that recording was the Earlies. They know almost every musician in the surrounding area, and they and their friends are the go-to people for music. We kept having to cut recording days short so they could go play with their dad's band, which is awesome, but not as good as Happy Birthday at Carlo's. Everyone in the band brings their own thing to the music. Tom is all about detail, Euan is amazing at designing sounds, Pete’s background is in pop drumming so he provides a broad framework to hang it all on and Ricky is the one who is genuinely interested in folk music. All my songs start off on an acoustic guitar so there’s no escaping the fact that they are born folky, but by the time we came to record this album most of us were so bored sick of the word we didn’t want anything to do with it. Sometimes, however, you just have to do what the song tells you to. Whereas we made conscious moves away from fiddles and tried to find more interesting ways of using instruments like mandolins, as well as bringing the Earlies’ vast collection of keyboards into it, some songs just wanted an immediate straightforward recording. This one is one of the ones were Ricky’s influence is most felt. He played about six hundred violin lines on it, it’s fucking folky, and there’s nothing we can do about it. Sometimes you just have to admit you are what you are.

On the Museum Island

This song is the studio song. I finished it on a day off and even as we were recording it the others were shouting yes or no to certain lyrics. It gave me and Euan a chance to sing into an old piano chamber and it gave Tom a chance to open the existing piano and play the strings. It was a lot of fun and it came out a lot easier than the others. It was so immediate that I’ve only just listened to it and realised what the words mean.

I wrote this song so I have only myself to blame but I literally cannot sing it. I cannot hit any of the notes. Around when we were doing vocals, I got really bad food poisoning from some Tesco's fish, and the others were convinced that I just had nerves because I had to do vocal takes. Christian from the Earlies went as far as saying that he would eat the fish as well and prove to me that I didn’t have food poisoning. It was only on the second morning when I forgot to close the bathroom door that they believed me. I was incensed that they thought I was so bad at singing that I was LITERALLY SHITTING MYSELF. But they were right about half of it. If a sizeable enough car passes the venue in the middle of a gig, my voice will be drowned out. It’s weak. Recently, I heard myself speaking and was so taken aback I had to sit down. In my head I sound like Roger Moore giving a lecture on being important, but in reality it’s more like a baby puking into Renée Zellweger’s mouth.

This is the song where we had to start making aesthetic decisions. Pete plays the trumpet so we just assumed we’d throw them on everything, but when it came to it they sounded too kitsch. We had to go in a direction instead of just putting anything on that sounded nice. In particular, I had to separate the bands that I liked from the ones that were important to the album, or ideas that were nice from ideas that we wanted to pursue. A lot of the chamber pop stuff was thrown away as we went along and I think by the time we get to the next album they’ll be gone.

Nicky from the Earlies sings this song in ‘cowboy’, and it actually might be slightly better than when I sing it. He has a very good cowboy voice.

Most people who heard the album before it came out thought we should take this off, therefore it is now my favourite song on the record. I wrote about three extra verses for 'Easter Parade' and another two abandoned songs on the theme of it, so I’ve got a pretty tight story for it in my head. I wanted to put at least one other part on the record to indicate that it has a story, it’s not just random. Someone asked me if this has a reference to the book the Shipping News but it doesn’t. It’s just another word for the shipping forecast.

Bad Things Coming, We Are Safe

On the day we went in to record this song, the desk broke. The guy who came in to fix it had no intention of using anything other than the power of thought, so we were in dire straits. At this time we still believed that if we got it done to a deadline the album would come out in September. The Earlies explained to us that no matter when you hand an album in, someone will push it back to a point that feels like an impossible wait. “Not if it’s our own label,” I told them. Ha.

Everything Reminds me of You

Recording with the Earlies was kind of a spontaneous decision, but when we started recording I realised how appropriate it was. Some of the songs were always going to come out how they are played live, but others I had different ideas for, and Christian and Nicky were really the only people who could have helped us realise them. This song is one of them, and 'First Love' is another one. When I was trying to explain to them what I wanted I kept mentioning the first Micah P. Hinson album, which actually had been arranged almost entirely by Christian. Happy accident. With the album being pushed back and trying to start our own label in the middle of a giant recession, I had a lot of time to wonder if the decisions I’d made were totally stupid, but in the end I decided any mistake was worth it. Hanging out in Colne with Christian and Nicky changed the three of us, and I wouldn't swap it for anything.

One night, Euan and Tom and I were so burnt out, sexed starved and rained in that we spent the whole evening repeating the phrase “Winston, there’s a grouse on the horizon” in different accents. We had no alcohol, drugs or stimulants, and the TV was broken, so that’s what we did. We laughed for about three hours then suddenly stopped, looked at each other and swore we’d never speak of it again. I know it’s got fuck all to do with the album but I’ve run out of things to say. If you’ve made it this far, wow. All these things are important to me, but there’s no reason it would be important to anyone else. It’s nice to have a record of them on the Internet where I can’t lose them. Thanks. This is the studio on Tom's birthday.