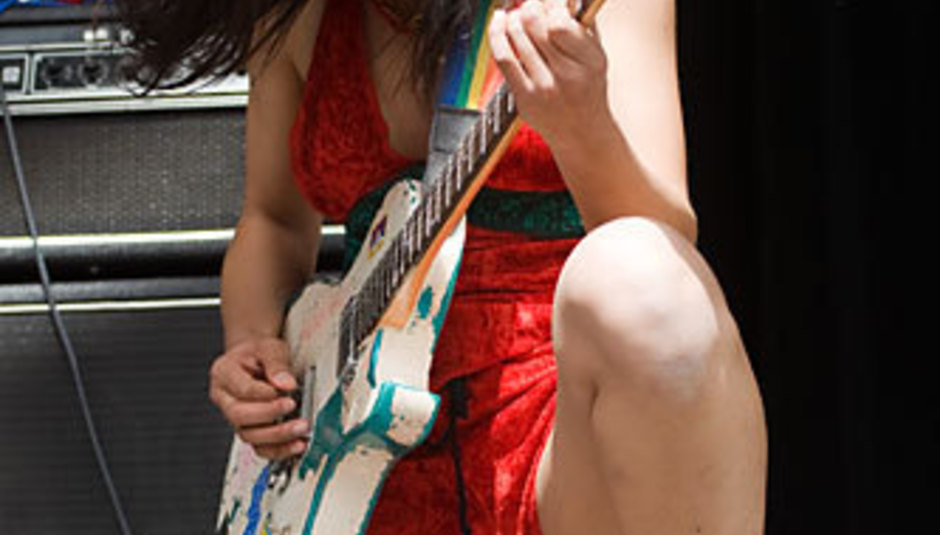 It’s very serious here. Everyone is concentrating. Everyone feels privileged. Harmonia are a German super-group who first came together in 1973, composed of three men who helped shape the future of electronic music – Michael Rother (Neu!, also briefly in Kraftwerk), Hans-Joachim Roedelius (Cluster) and Dieter Moebius (Cluster). It’s the sort of stuff Brian Eno and Stereolab and Throbbing Gristle used to go demented over – macro and micro-incremental changes in pace and sound: what you give is what you get – and nowadays is all over The Wire and Pitchfork. Don’t let that put you off. When Roedelius – the tall, affable, chrome-domed one – raises a glass of red wine at set’s end (the traditional format of guitars and drums switched for three tabletops submerged under intriguing squiggly wires and machines) to a cheering, elect Powerhouse audience, it’s in acknowledgement that we’ve all been on quite the enlivening ride, a rollercoaster of peaks and troughs; instrumental, sure, but infused with a charming Motorik beat and subtle sense of humour that sees most unexpected noises being created in Moebius’ corner to help break the flow, while Rother straps on a guitar to fuel the playful ‘Veteranissimo’ (last heard on Harmonia Live 1974). Grown men are heard to audibly sigh with satisfaction and relief. It all kicks off during ‘Nations’. For 30 minutes we’ve been sitting here – same venue as previous night – wondering quite why we’re sitting here allowing former Swans frontman Michael Gira to regale us with a collection of vaguely engaging, vaguely tepid blues/folk songs – acoustic guitar, seated, foot tapping the floor, strained expression. We’ve been admiring the way he’s able to embarrass fidgety audience members with a few well-chosen words and a shit-eating smile – he’s already explained to us that he prefers the house lights on and the air conditioning off, because it helps his art – but frankly, we’re bored. Little do we realise that Michael Gira – he strides on stage in a massive fuck-you cowboy hat, greeting us like a creepy born-again preacher – is just warming us up, working himself up into a state of semi-frenzy so that he can begin to howl and moan off-key. Little do we realise that Michael Gira will really begin to unsettle us – with the odd, old Swans numbers (‘God Damn The Sun’, ‘Raping A Slave’, made even nastier and purer by our ability to understand every word) and new Angels Of Light numbers (one, a prayer dedicated to patriot, as an example of the terrifying beauty and disease of life), looking possessed now, his face contorted, his voice gone – shouting, shouting demented. He might be playing acoustic nowadays, but he’s lost neither the intensity nor the loudness of Swans. Oh, but The Saints are rotten. No one is too hyped up by the homecoming punk heroes’ return – this open air show at The River Stage may well be only the third concert the original lineup have played since their abrupt dissolution in 1978 after recording three albums in quick succession, but seeing as how the first was only a year back, in Brisbane, the sense of anticipation is somewhat dulled. Not as dulled as the group itself, though. Apparently, the Mount Buller ATP show a week earlier was full of tension and guitar pyrotechnics – revered guitarist Ed Kuepper responding to the irritating horseplay of singer Chris Bailey by cranking up a deluge of sound, a wall of noise fuelled by dozens of Marshall amps that equalled even Neil Young at his peak: a three-piece horn section considerably upping the ante on ‘Messin’ With The Kid’ and all-time classic single ‘Know Your Product’ – but there’s none of that here. The band seems bored. The audience certainly are. There’s not even a sniff of (possibly the greatest Australian 7" ever) ‘(I’m) Stranded’ – which wouldn’t be so bad, except that the first album was promised, in Don’t Look Back fashion. “Like watching Dire Straits at Live Aid,” remarks one disillusioned semi-fan. “Why are they here?” Ooh, now that is harsh. Fortunately, both Nick Cave And The Bad Seeds and Robert Forster play sets either side of The Saints that prove age is no barrier to craftsmanship (in Forster’s case) or showmanship (Cave strutting and carousing, as virile at the age of 50 as he was three decades earlier). Forster plays several Go-Betweens numbers, to his home crowd’s delight – elegant and able, strumming his guitar like you always thought Dostoevsky should’ve – and sounds near-perfect in the warm sunshine. Cave is sublime: mischievous and romantic and, in Warren Ellis (who now sports a prominent crucifix and beard seemingly modelled on Fagin from Oliver), has his greatest foil since Rowland S Howard. As many hits as you could desire are played – ‘The Ship Song’, ‘The Weeping Song’, ‘Deanna’, ‘Red Right Hand’, ‘Tupelo’, ‘The Mercy Seat’, ‘Stagger Lee’ et al – and the songs from 2008’s highly praised album, the fervently and wickedly religion-debunking Dig, Lazarus, Dig!!! don’t pale in comparison. And those shadows the band throws up…! Those monstrous shadows! Roald Dahl would be proud. Afrirampo rock. Indeed, the two girls from Afrirampo rock so hard – and with so much passion, and good humour – that even five days later, small sections of Brisbane are walking around in a daze, still astounded at the theatrics and the noise, unable to communicate in grunts of more than one syllable. Here’s to the next… uh, ah, ooo. WA! WA! WA!