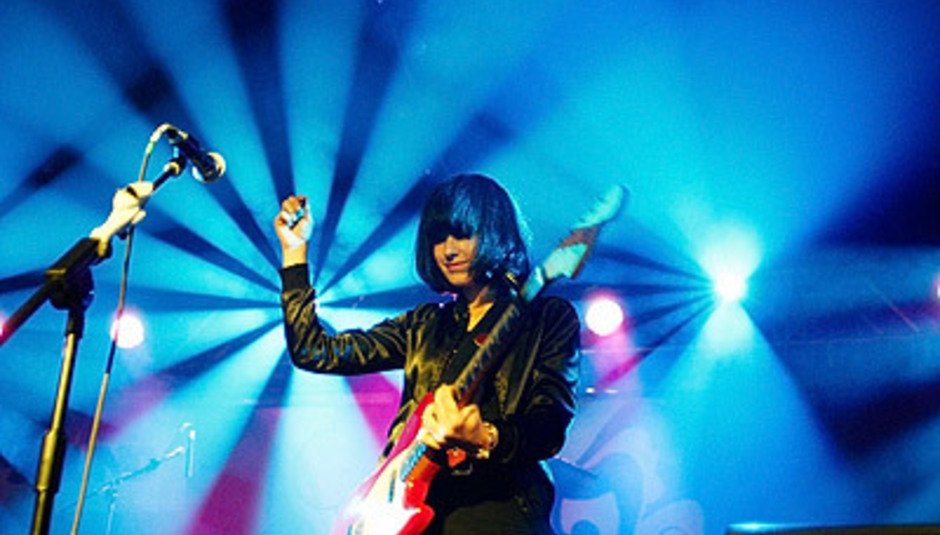 In part one, Sky Larkin, Chairlift, Midnight Juggernauts, Howling Bells and Catherine A.D. tell us which five records they loved in 2008.

why? Alopecia
I had heard nothing from this record until I had 8 hours to kill in Seattle-Tacoma Airport alone, I walked length of the airport listening to nothing else and by the time I finally got on my flight I knew it was a firm friend. Musically and lyrically it carries constant sense that it was made with a complete relish for the creative process.

The Breeders Mountain Battles
An intuitive and groovy rock record, 'Bang On' and 'Istanbul' being head-boppin Deal-harmonising favourites.

Portishead Third
An intense listen, both tough and fragile. My favourite record of 2008 for both headphone listening and after-hours gatherings.

Death Cab For Cutie Narrow Stairs
On this record Death Cab really achieved a sound-craft that equals their song-craft. We did part of our album in their studio and I must admit to getting giddy whilst playing the refrain to 'I Will Possess Your Heart' on their piano when no-one was looking.

Neon Neon Stainless Style
This year was my (and our) first Glastonbury and this was the perfect festival set from the perfect concept band. Also probably the record that got the most airtime in our tour van Horse.

why? Alopecia
Katie and I were discussing this album the other day, about how every song is completely listenable, either on its own or as part of the album, you never need to press the skip button!

Rolo Tomassi Hysterics
A slightly controversial choice, but I've chosen this because of the sheer noise to come out of such unassuming looking people, ha! It may not be to everyones taste, but judging from how incredibly busy they are after its release there must be at least a few people listening...

The Mae Shi Hylllh
Like nothing I've ever heard before and yet also like everything I've heard smushed down into one album. I was just beginning to lose faith in this album when I saw them live and suddenly everything make perfect sense.

The Bronx The Bronx III
Only given it a few listens so far, but I can already tell that its a perfect combination of Bronx I aggression and Bronx II pop hooks. Yum yum!

Sigur Rós Med sud i eyrum vid spilum endalaust
Just because it's brilliant, and different to their previous albums, a lot cleaner and stripped down, but also far more complex at the same time. It's made them a band for any time of day.

Wild Beasts Limbo Panto
Because it was only with the album that I noticed Tom's voice, it never really occurred to me that there were two lead singers until this came out...

Why? Alopecia
What ^ said.

WHY? - "Song of the Sad Assassin" live at Dublab

Los Camp' WAB WAD
I think this is the album they've wanted to make since the first one came out, and it's the album I've personally been waiting for having seen the energy and power they possess live (oh, so many times) it's good to hear it captured finally - the first one didn't really do them justice. And the packaging is sweet as well.

Volcano! Paperwork
They're like some bastard son of Wild Beasts (or vice versa) that's spent too much time listening to free jazz. In a good way. Because they're the best live band I've seen all year, and because of this video:

M83 Saturdays = Youth
This record was a repeated reference point when we were mixing. Exquisite production. Liquid nostalgia. Perfect. Goes down well with Blonde Redhead's '23' and rum and ginger.

Nick Cave And The Bad Seeds DIG, LAZARUS, DIG!!!
How is it possible that they just keep on getting better? I got to see them at the Troxy in London last month for the first time and Warren Ellis was simply amazing; all flying hair and flailing arms - like watching King Lear on amyl nitrate. 'We Call Upon the Author', is probably my song of the year: "Bukowski was a jerk! Berryman was best!". Indeed.

Cut Copy In Ghost Colours
It was a close call between this and Friendly Fires sheerly for the number of times I have played 'Paris' (which, to my mind, is the perfect modern song and is going to be my Christmas 'card' cover this year). I listen to IGC all the the time when I'm running (good bpms!!) I was first blown away by them this year at Coachella despite it being too hot to dance. All music should make you feel this good.

Hauschka Ferndorf
Exquisitely formed instrumentals that almost make me want to take hammer, paper and tongs to my piano, put on a leotard and take up ballet again and pretend to be John Cage. Almost. This year's hidden treasure that I discovered thanks to reading a review on DiS.

Gang Gang Dance Saint Dymphna
I've liked their stuff for a while but this record feels like they've really honed their craft. You can listen to it over an over and discover more and more sounds - definitely a record you can delve into.

Deerhunter Microcastle/Weird Era Cont.
Just great pop. It feels like it was recorded quite quickly without too many distractions which really brings it to life. I saw them earlier this year in Paris and the record (especially the Weird Era tracks) really complement the live show. I'm into a lot of old dream/surf pop so i guess i am kinda biased..

Squarepusher Just a Souvenir
I know most people don't like this one as much as his previous records but the 'live' element gives it a real zappa feel - like an almost improvised free jazz thing but its so super controlled.. 'Planet Gear' and 'A Real Woman'- definite standouts.. its like 70s psych and metal..

Portishead Third
The production is so good, the songs are sad yet enchanting. Obviously not as minimal as they were before - but the way everything builds is tasteful. Probably my favorite record of the year.

Midnight Juggernauts Dystopia
Is like reading a classic sci-fi novel, whilst dancing in a field of really good looking people on mushrooms.

MGMT Oracular Spectacular A sublime marriage of psychedelia and melody.

Portishead Third It reminds me that anything is possible in its elegantly draped electronic fizz. I enjoy the adventure.

Elbow The Seldom Seen Kid
Melody from deep within. Contagious!!!