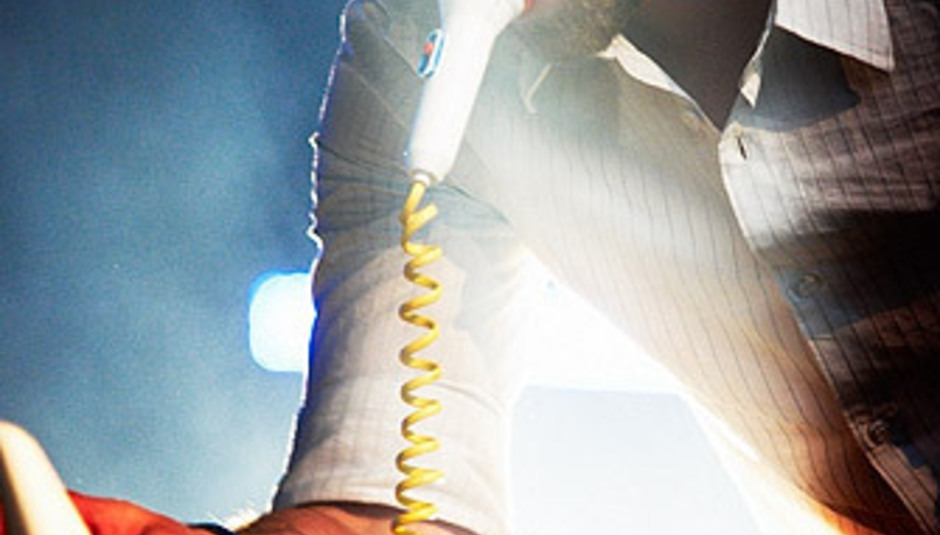 Something old, something new – fit the fifth: F*ck Buttons

Something old, something new – fit the fifth: F*ck Buttons

In the context of the past, this is where I’d place Fuck Buttons…

Disclaimer: I’m not saying that Fuck Buttons consciously borrow, beg or steal from any of the following – just that everything has a context, and that I’ve suffered too many storms and lulls not to hear elements of everything in everything, and that, jeez, no band exists in a vacuum, now do they, and if they did they’d be fucking freezing, and…well, that’s it, really. Everyone is in Sonic Youth’s shadow. As Slim Moon (Kill Rock Stars) stated, “They’ve remained ‘the band’ forever. They’re royalty. If Sonic Youth had only made three or four records, they might be part of a list of the greatest American bands. Considering they’ve made 20 years of great records, they pretty much left everybody in their dust.” OK, so I think Sonic Youth are more conventionally ‘pop’ and aggressive in their noise harmonics than this Bristol duo’s adventurous, often humorous, journeys into sound – something to do with Thurston and Lee’s roots in NYC No Wave – but I’m willing to be contradicted. Fuck Buttons feel more tribal and dance-orientated in their distortion and fecundity (check ‘Ribs Out’ from Street Horrrsing) but the fact remains: anyone operating in this sphere is at least one part Sonic Youth.

He’s the musician of choice for those looking to experiment with looped sound, drone metal and disembodied vocals. Don’t be fooled by the folk overtones: Fuck Buttons like structures as much as the next stand-up musician. Plus, the melodies are dreamy, picked out deftly among the oscillation.

Some would argue 10 parts My Bloody Valentine – and there’s no denying Isn’t Anything? is one hell of a link between the more traditional, primal pop-noise overtones of Dr Mix And The Remix and Suicide, and the early noise overload of Dinosaur Jr, the same way Street Horrrsing transcends all influence. But unlike all those who followed immediately in My Bloody Valentine’s wake (and they were mostly very average) – Chapterhouse, Ride, Swervedriver, I’m looking at you – Fuck Buttons have plenty of ideas of their own. But fuck yes, the way ‘Okay, Let’s Talk About Music’ segues into the blissed-out ‘Race You To The Bedroom – Spirit Rise’ totally reminds me of that one glorious chord MbV played for the entirety of a show in Boston, MA in 1992. If ever a band seemed to have been designed solely for Simon Reynolds’ listening pleasure, Fuck Buttons are it.

Gong were unrequited hippies (‘space rockers’), mid-Seventies – threw up several interesting angles and directions for music to go in, only to be unceremoniously dumped as punk came babbling in. Gong experimented with dub, and weird-ass voices, and distortion, and widdly-widdly guitar solos, in a way untapped until Jim O’Rourke and Pitchfork started taking over the asylum. There’s even been a recent incarnation of Gong, called Acid Mothers Gong – those demented Japanese psychedelic rockers Acid Mothers Temple getting in on the act – that sounds like certain aspects of Fuck Buttons. I would imagine.

one part This Heat

Everyone knows about This Heat now – how this South London band gamely bridged the gap between Krautrock and post-punk/noise, particularly with their heavily tape-manipulated, repetitious, debut album This Heat (1979) – but I still have vivid memories of a companion being knifed by a skinhead after we were arguing with him to keep the heckling down during a This Heat performance, supporting The Slits. To say they weren’t appreciated back then would be an understatement. Anyway, jeez yeah: Fuck Buttons parade the same dedication to miro-mental changes and Teutonic beats, and tape manipulation, and the march to fuzz, as This Heat.

That’ll be the march to fuzz then.

This obscure English mid-Seventies group released an album on Object Music entirely composed of washing machine sounds, entitled Indiscreet Music, sometime around 1979. I could be wrong about them being washing machine sounds (I haven’t listened to the record in almost three decades). I like to think not.

two parts The Sabres Of Paradise

It really isn’t that big a leap from the pulsating beats on ‘Bright Tomorrow’ and Andrew Weatherall’s ecstatic, rave-based, dub-led, experimental dance troupe, The Sabres Of Paradise – and, in particular, their splendid, entirely instrumental, 1994 opus, Haunted Dancehall. Fuck Buttons have vocals, though. I think.

Street Horrrsing is out now via the ATP label. Vote for it in the Rough Trade People's Voice Award here.