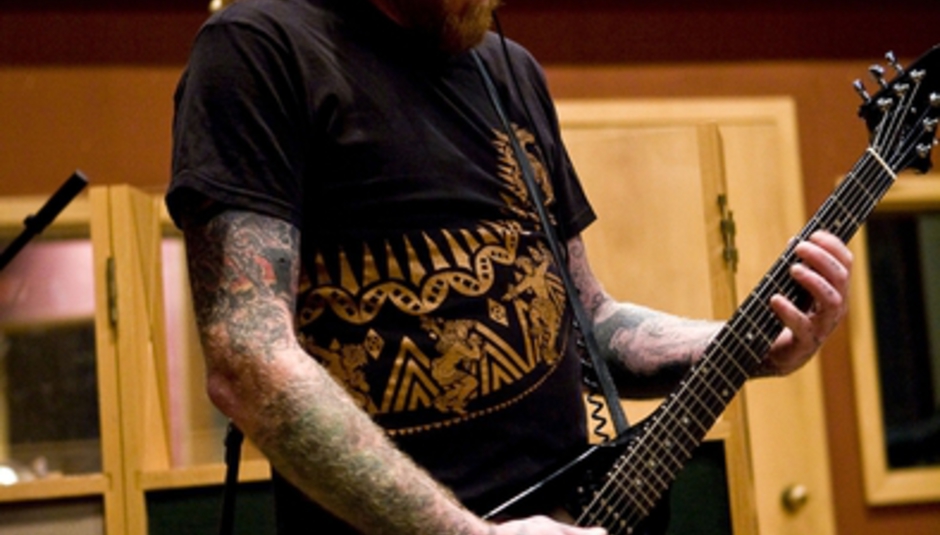 With the drama of the head injuries he sustained after a mysterious scuffle at last year's post-MTV awards bash now firmly in the rear-view, DiS finds Mastodon's Brent Hinds flanked by his bandmates and once again knuckling down to the business of steamrollering venues with their intoxicating brand of progressive metal. Hungover and two days deep into the latest European leg of the Unholy Alliance tour, the guitarist and co-vocalist talks up a meeting with The Boss, pals in Atlanta and the band's forthcoming LP - Crack the Skye - the successor to the blindsiding triumph that was 2006's Blood Mountain.

You're on the road with Slayer at the minute, any carnage to report?

Nah man, we’re only two days in so there hasn’t been any carnage. The only carnage we’ve had is Bill’s finger getting caught in a bay door and it kind of ripped some flesh off his index finger. That was some carnage.

So the fourth Mastodon album is finished…

The record is done, baby, done!

You seem fairly laid back but the expectations must be pretty weighty after Blood Mountain did so well; great reviews, massive sales, a Grammy nomination and all...

Nah, I’m not feeling that really. I mean, I’m anxious to have the album come out and I’m sure there’re some expectations behind it, of course, but I think people are going to be able to adapt to it pretty well.

So if Blood Mountain was about a chase, what’s the premise of Crack the Skye?

Are you road testing the new songs?

No, we’re not playing any new material. We tried that already and all these kids ended up streaming it on YouTube. It’s just a shit sound and we want the album to come out first. Besides, we don’t want to start playing it live because, even though it’s awesome stuff, we’d like the kids to hear the songs they already know so they can get into those more. We don’t want to throw them a curveball, like a new song, so they’ll be like ‘What the fuck is this? I’ve never heard this Mastodon song before – I don’t know what to do, I think I’m going to go to the bathroom or get a beer – I’m not going to watch this part of the show.’

Presumably the injuries you had to deal with after the post-VMA incident in Las Vegas delayed the album's progress slightly. Did you write while you recovered?

Yeah, I got hurt pretty bad so I was in the hospital for a while and it took me a long time to recover because I had severe head trauma…brain haemorrhaging and all that shit. So when I was able to feel like I could get out of bed - which wasn’t for a month or so - the first thing I wanted to do was play guitar. I find there’s nothing better than being in your own house with your house pants on and grabbing a nice mahogany B-15 Martin acoustic with brand new strings on it. So I sat down with that and pretty much started writing music for the new album. The injuries did affect me because I was writing much mellower stuff, but as soon as I took it to the band and we started working out the arrangements and the different riffs, it turned into a heavier album. Not necessarily a heavy metal album, but heavy, as in ‘woah, this shit’s heavy’. It’s a little more melodic too, there’re a lot more choruses, bridges, verses and proper songs that are written the way traditional classic rock songs are. It’s pretty much a classic rock album.

Classic rockers don’t tend to roar quite so much as you do though, and that must take its toll after a while. Has your vocal style changed to accomodate a more traditional format -- did you and Troy retreat to the drawing board?

No, no – we’ve never had a drawing board to go back to. We just always scream like banshees being stuck in the ass with a knife, although now – on the new album – there’s a lot more singing going on. It still switches between the both of us but it’s better – a lot more fun that way - and it’s easier on your voice. I enjoy that a lot more than screaming my balls off.

You had an audience with The Boss before you got down to business for this album, did he offer you any guidance?

Bruce Springsteen let me play his 1952 Telecaster – the Born to Run guitar - while the Philips Arena [in Atlanta] was packed with 50,000 people. The entire arena could hear it – awesome. I gave him my necklace and he put it on. He was a super cool dude but he didn’t really give me any advice other than to say that Brendan [O’Brien] was a great guy to work with. And I said ‘Well, you’re the Boss, I guess I’ll go work with Brendan’.

This is the first album you’ve recorded without Matt Bayles, was that a risk?

The Boss knows best, but Brendan O’Brien doesn’t strike me as an obvious choice to produce a band as heavy as yours.

Yeah, the heaviest thing he’s done other than us was, I guess, Stone Temple Pilots or Rage Against the Machine. I think Rage are actually heavier than us though, don’t you think?

I'm not convinced there...

I guess he produced that Korn record too, they’re pretty heavy. He did all of those guys, and of course Pearl Jam, Bob Dylan and Springsteen. But meeting Brendan was like meeting Brann, just 15 years older. Basically everything Brendan had as an idea felt like an idea that I hadn’t said yet – he and I were completely on the same page with everything. He’s an excellent guitar player and a piano assassin at that, so we just had fun. We recorded the album of course - it’s done and it sounds awesome and everything - but we also sat around, told a lot of jokes and laughed our asses off the entire time we were in the studio too. I think that’s important for morale.

You’ve made no bones about your prog rock influences, but when you’re writing these narratives about fearing the hammer of Thor, Moby Dick and searching for crystals down a dark hole, have any of you ever stopped and said ‘come on now lads, that's a little bit too Dungeons and Dragons, even for us’?

What will you move on to next, now you've tackled the four elements?

Now we can all quit. We’re either going to turn into carnies, jazz musicians or a travelling carnival jazz band. Maybe we’ll join the circus.

Almost as weird: you played a gig in a derelict house for the Atlanta chapter of the Burn to Shine series...

Bill: Yeah, the thing at the house.

Brent: Oh yeah – yeah we played at that house, and then they tore it down.

Bill: What was the point in that anyway?

Also on that bill were Deerhunter and Black Lips, is there a strong sense of camaraderie there at the moment, over in Atlanta I mean?

Yeah man, me and the guys from Deerhunter are good friends and the guys from the Black Lips are really good friends, and then the dudes from All Night Drug Prowling Wolves are like best friends. And none of these bands are anything alike, at all, even for a second. I hang out with Brass Castle, Norma Jean and the guys from Black Lips on a daily basis. Well, whenever we’re in town. All the bands that I’m namedropping are touring all the time, like we are, so it’s very hard for us to hang out. But we’ve got a bar back home called El Myr that we all meet up at to drink margaritas and tell each other lies.

Finally, once the album's out there, what does Mastodon want to get out of the next 12 months?

I think we were talking about taking over the world and being bigger than Metalocalypse, but I think I’m going to buy a big castle in Scotland and live next to the Loch Ness Monster. In fact, that’s exactly what’s going to happen dude. That’s my goal.

Crack the Skye is due for release via Warner Records in early 2009.

Something old, something new – fit th...