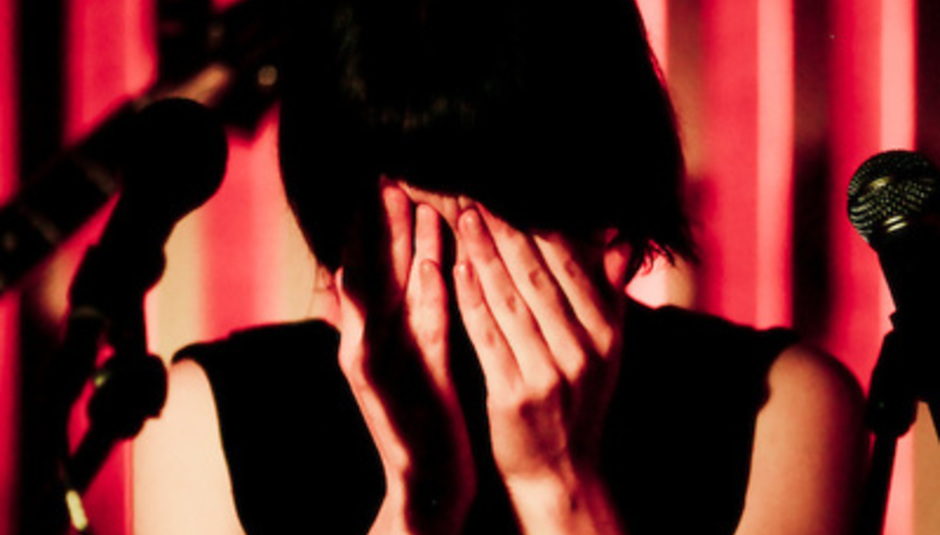 DiS checked in with the Finnish lo-fi folk artist Islaja in anticipation of her upcoming Approximatley Infinite Universe (no-signal.net/aiu) tour.

As Islaja, Finland’s Merja Kokonen has made lo-fi folk over the last six years that you could certainly describe as weird and dark. It sounds by all means like it’s made in a dark wood somewhere, and thus it’s easy to create mythologies about the place and the small scene of Fonal Records that supposedly eat a lot of mushrooms and splatter trees with paint and fill the woods with their spooked out folk sounds. Naturally, it’s not really like that; they’re just bros, and Merja is as chilled out as you might expect. For the Approximately Infinite Universe tour of the UK (from September 19 – 27) she’s teaming up with other members of that Fonal scene; Kemialliset Ystavat and Es as well as American weird folk and noise counterparts Axolotl, Blevin Blectum, Samara Lubelski, Fursaxa and Dream Triangle for a special string of one off performances. But yeah, we didn’t talk about that a whole lot; I was more interested in what it’s like in Finland and where Merja is coming from.

DiS: Okay, so obviously Finnish is your first language and that’s why you sing in it, but listening to it from a non Finnish-speaking adds some further mystery to this strange different sound. I was reading some of the English translations (www.islaja.com/lyrics/) of the lyrics and its funny how they are pretty similar to the sort of thing I would imagine you were singing about.

Merja: Yeah, that’s curious. I didn’t know about that. I guess it’s hard for me to think about that because I know what I sing. It’s like if you think that you could have guessed the lyrics by the way that I sing them, its really curious. It’s really cool actually. It probably comes along with this image of me as Islaja, I dunno. It’s something; it’s awful, it’s like I’m trying to be mysterious but it’s really just simple, but because I’m Finnish it comes across really differently.

DiS: Yeah, it seems like it’s maybe been amped up or taken the wrong way, judging from the writing about Islaja, which emphasizes some strong sense of mythology and make a big deal of the mystique of it all.

Merja: I mean, it doesn’t really exist of course. But its like, to sell a product, you have to have an image, you have to have that package. For us, it’s this mystical, mysterious forest thing. I dunno, I guess it’s kind of true. But, I don’t live in a forest. I don’t eat mushrooms, if I do I get them from the grocery store. I guess that’s what its about, to stand out from the masses you have to like, have something. And that’s what they [music journalists] gave us.

Dis: It’s prone to a one-sided perspective of course. I mean, bands are probably taken the wrong way and just taken how music writers want to take it a lot of the time.

Merja: Yeah, but I don’t think it’s really my problem. And the whole forest folk thing is so passé, I think, I mean, it was four years ago that it was the big topic. It was like, the nest, and now we are grown ups and we don’t have to be part of this Finnish forest folk title anymore. It’s more like we try to do something and get respected individually now. Four years ago it was more lumped together. And of course, we were this circle of friends so it helped to create the myth that it was this big communal thing. Which is actually true; everyone knows everyone, but that’s just because it’s such a small country. I know the article they had in Wire was about the circle, and it’s quite obvious why people think like that because that’s the image we give.

'PETE P' - by Islaja, Directed By Nicky Lianos
Dis: Yeah. Well, in terms of those lyrics that I was looking at, and just how they sound on the record, I feel like it’s a very visual sort of sound and it seems there’s a lot of imagery in there. You went to art school right?

Merja: Yeah, that’s where I met the Fonal people. Almost all of them had graduated from art school. That was the place to meet people for me, not so much about learning about art but more to meet cool people, meeting like-minded young people.

Dis: Oh, so maybe starting to make music there was almost more social than just finding this interest in art and things from what you were learning?

Merja: Hmm, it happened so slow in a way, like there wasn’t just one turning point in when I started to make music. Most of the people in that group would get together and play music, that was like the thing to do. That was fun for me, because I’d never met people like that before. It wasn’t really about art school, it was more about the things you do after school. We would do drawings together on bits of big blank paper and everyone’s drawing. We had some exhibitions about these collective pieces. So our music was sort of associated with that as well.

Dis: Okay. Well, with the visual element of Islaja, I was thinking that to me there’s obvious dark tones mostly, but there’s lots of colour coming through. Like the cover of Blaze Mountain Records kind of looks how the music sounds.

Dis: Haha, well, I guess the way that it’s made, like painting on a photo is fairly DIY, but I was more referring to the sort of massive colours that come over the murk.

Merja: I guess I need to have those bright colours, otherwise it would just be dark. But each year, it seems to be getting more dark. I don’t know if there’s a reason that I can tell for this, but it seems like it’s happenening.

Dis: Would you consider yourself a dark person?

Merja: Well, some people can hide it, so I don’t know how dark I am compared to other people exactly, but I do kind of feel at the moment that I’m the darkest person I’ve ever met [laughs]. Which is probably a pretty awful thing to say.

Dis: What is it like to live in Finland? Is it a nice place to live?

Merja: If I’m away and come back, I just can’t understand how anyone can live here. But if you stay here and don't go anywhere for a while, then you don't want to leave. I mean, it’s a cliché, the darkness and coldness and blah blah blah. Last year I spent most of the year away and now that I’m back it seems hard to get back into life and understanding how people live here [laughs].

Dis: I don’t think it was something you wrote, but I read on your website some words about your songs telling us about “the decay of our age, its demise and immorality and its plunge into heartless consumer culture”. That’s pretty dramatic, but do you feel this way at all?

Merja: Someone else wrote that about me and my music. Maybe I think about it on quite a hidden level, but not that much, maybe because no one asks about it. Or maybe I think about it but just don't let anyone know. But life is pretty grim when you think about it [laughs]. I’ve always felt that the reason I make music is that I’m trying, in a way, to give hope to myself or to other people, but it’s not the same thing as being happy. But giving hope, in the middle of darkness – I mean, black is a colour, isn’t it? – well, that’s a motivation for me. Although people sometimes say that my music is more punishing than hopeful sounding.

Dis: I was thinking, part of this mystique that people place onto is Islaja is that it seems to reference older and really obscure Finnish folk that I’ve never heard. Did anything like this influence you or inspire you to start making the sort of stuff you are now?

Merja: Actually, yeah, when I was first starting out, six years ago, I listened to a lot of Finnish gypsy music. It has nothing to do with the idea of gypsy music that you might think of; it’s purely Finnish, it’s more like hymns, church songs; things you could sing in church but without any instruments. Like…moanings. They’re really modern in a way; singing about how they went to jail because they had an alcohol problem or something. It’s really like blues, in a way. They don’t really have any official releases or anything, more just home recordings which some guy from university put together onto a CD. It’s very improvised I think, when it was made. It’s very cool.

Dis: It seems to make sense with your sound, the way you describe that music. These days, though, are you working on any new material?

Merja: Yeah, I am; in fact, just before you called me I was editing stuff. It’s something totally new; that’s what I thought I could just switch to singing English no one would recognize me because it sounds so different. I dunno, some people might find it really different, but for me, it feels like it’s going to be my debut [laughs]. It’s a feeling that you should actually have if you’re writing music, though, that it’s going to be better than before. I feel like the next one will be better again, too. The reason I’m so excited about it now is because I’m making it a very different way. I’m not using any acoustic instruments at all and I’m actually using software to record it. It’s just samples and beats, but, not really beats at the same time; it’s just hard to recognize the percussions because they’re so weirdly effected. It’s wider, louder and bigger, and more clear.