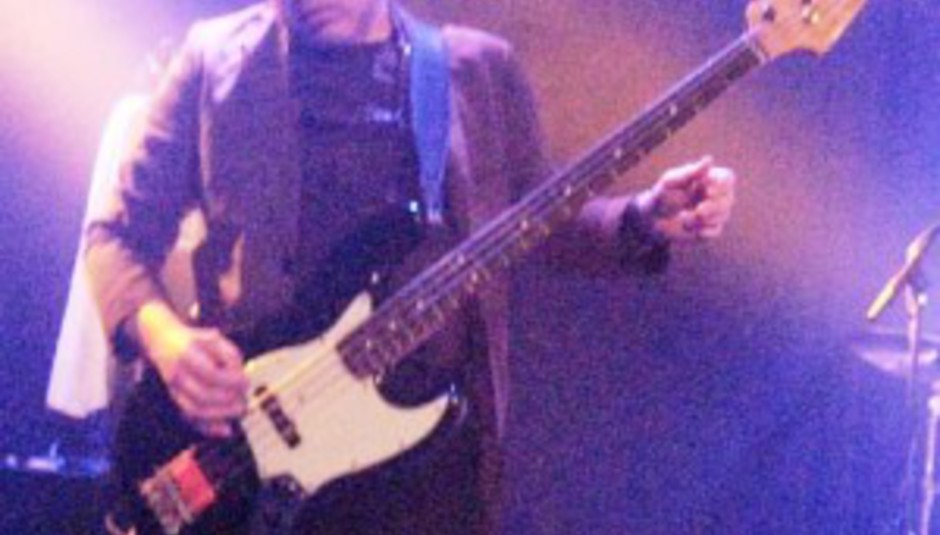 The Belgian town of Leuven is a survivor. The University library was deliberately burned down by the Germans in 1914, with the loss of 300,000 books. Restored after the First World War, it was badly damaged again in the Second. The destructive tide of history has swept through the city, but aside from one building with a facade battered and pitted by shrapnel, the scars have been removed, leaving a quiet place with beautiful squares, streets lined with manicured trees, and umpteen studious-looking types nipping around the place on bikes.

It’s an interesting place for Wire to play their first gig in four years (the last was at the 2004 Benicassim Festival), and a perhaps surprisingly tentative return. For the Read & Burn 03 EP, released last year, was arguably their best work since the triumvirate of albums that kicked off their career back in the late ‘70s. Yet Wire are regarded as something of a side-issue in the oft-dreadful canon of punk that lauds the overrated pub rock of The Clash, and even some of the more moronic three-chord spit-and-no-polish bands, over Wire’s finely honed, dagger-sharp, and often extremely pop-leaning oeuvre. The likes of ‘The 15th’ and ‘Outdoor Miner’, for instance, are infinitely more melodic and sweetly rewarding than anything the Strummer and co hammed out.

Yet tonight at the Stuk arts venue, we’re greeted by the entire Belgian subscribership to the magazine that bears the same name as the headlining act, and are proffered flyers for a local free noise night on the way in. Support comes from the excellent Sylvester Anfang, who play huddled in the middle of the venue, deploying three guitars, Korg, drums, bass and sundry noise (recorder, Walkman) in pursuit of the subtle epic. Their fluid yet powerful music shaped by the flat lands, big sky and rain of the Netherlands is a million miles from the fusty British idea of post-rock that comes from small towns and too much time during those public school holidays.

What’s so brilliant, so endearing about the return of Wire tonight is how unforced, how uncool it all is. Whereas my experience of Gang of Four’s reunion shows was of a bunch of pub blokes standing on monitors like grandstanding uncles, Wire, though in stage black, are pleasingly down-to-earth. After all, “Rock on Colin”, as shouted by one of the crowd, is hardly the most outrageous-sounding heckle. Bassist Graham Lewis is hulking away, the sleeves of his black jacket dripping sweat by the end of the third track. Drummer Robert Grey (formerly Gotobed) looks like the corpse of a professional hod carrier with all the flesh removed in a medical diagram: bald, sinewy and intent on his purpose. Bruce Gilbert, the band’s original guitarist, has departed to be replaced by Margaret Fiedler McGinnis (formerly of Laika), who fills his shoes with aplomb.

Two songs (the dense and pacey ‘Comet’ and fizzing bluster of ‘The Agfers of Kodack’) make an appearance from Wire’s last LP, 2003’s Send – but when Newman announces tracks from the forthcoming Object 47 album, it’s with a definite pride – he knows how good this material is. Whereas Send was marked by a neo-industrial fervour created from mechanised drums and thick squalls of sound, Object 47 points towards a record that seeks to embrace greater melodic structures, while still retaining the distinctive Wire sound.

Tonight, Wire acknowledge this distant past as ‘The Lowdown’, ‘The 15th’ and ‘12XU’ make appearances at the end of the set. Yet ‘12xU’ is blasted out with such violence that it turns full circle and sounds like a repost to all those who Wire fought so hard all those years ago by playing experimental art shows at the Camden Electric Ballroom. What is the “X U” if not a “fuck you” to the idiots who turned their backs when Wire had the temerity to make guitars not sound like guitars, to make music that you couldn’t just mindlessly bounce to? It’s been too long since Wire were considered with the same respect as so many of their peers – this is, like most things, the fault of Britpop. Menswear ripped off Wire riffs because they were talentless pretty boys who liked getting drunk in the right watering holes of Camden; they missed the point that Wire was an exercise in aesthetics and brilliantly constructed minimalism.

After so long, and with their best material in 30 years seemingly imminent, could a belated and much-deserved renaissance be on the cards?