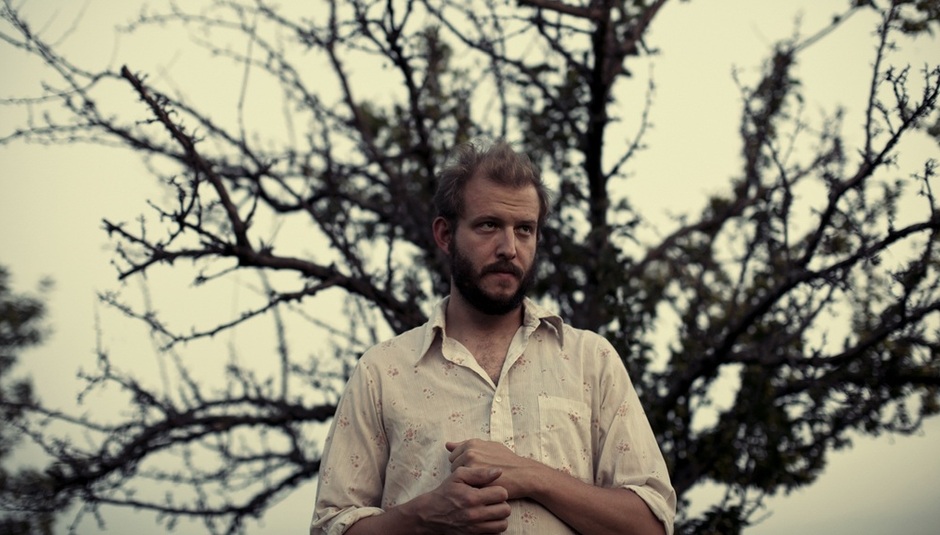 Of all the DiScover interviewees this scribe’s come face-to-face with, Justin Vernon is definitely the easiest to spot. Sat with his back turned on the sun-drenched balcony of Tate Modern’s sixth floor café, the brainchild of Bon Iver (a bastardisation of the French for ‘good winter’) wears a lumberjack shirt and woollen beenie hat suggesting he’s rather less familiar with the unseasonably bon printemps we seem to be enjoying this afternoon.

Broad-shouldered and impressive of beard, he looks the very epitome of grizzly North American man, which is just as well really – his raved-about debut, For Emma, Forever Ago, was recorded during a solitary stint of over three months in his father’s log cabin, Wisconsin, much of which was spent chopping and gathering wood from the surrounding forests.

For those of us who’ve yet to fell a tree in anger, however, a little context – prior to the move, Vernon was living in North Carolina where competing directions within his band, DeYarmond Edison, conspired to leave him feeling “unimportant and uninspired”.

“One day we were practising something I was just not into and I said I just can’t do this anymore,” explains Vernon. “It was strange ‘cos we were like brothers, we’d broken up with girlfriends because we wanted to be together, so it was a weird time.”

Ironically this time it was to be another aborted romance which helped precipitate the band’s demise, along with Vernon’s dramatic retreat to the countryside. Still, though, one has to ask: chopping wood? In the freezing mid-western winter?

“I needed somewhere to live, he says. “I didn’t have any money and this place was free, plus it was in the middle of the woods which was attractive because I was definitely going through a stage where I was sick of people and I recognised that I needed a change.”

“The simplicity of feeling being out there, it’s a very peaceful connection. I really miss that and now I’ve found it I really feel the need to seek it more in my life. But I’m actually a pretty sociable person.”

This last you can believe: Vernon is warm and direct in his responses, speaking in a faintly musical brogue whose cheery, clipped tones remind me inevitably of Fargo (a sketchy spot of internet research puts my linguistic connection at around three hundred miles out, although both areas have at least a strong Norwegian ancestry in common).

Not the taciturn figure you might reasonably expect, then. But was there a strong ascetic impulse in deciding on the move?

“It definitely felt good in that way. I’ve studied all sorts of world religion and I’m aware of that language and idealism. Truth be told I think that I was bored most of the time, I mean realistically you get lonely, you wake up and there’s nothing to do, and for the first two weeks that’s all I did.

“But I needed to clear a lot of cobwebs and extract a lot of things that were not good in my life.”

Much as it’s tempting to conjure grand notions of the artist beating his lofty retreat to paint his masterpiece in the snowy wilderness, boredom is a theme which recurs in Vernon’s conversation on the topic, as is self-indulgence. Still, even he wouldn't begrudge the cathartic qualities recording music for the album had.

“I think the biggest thing that happened out there was I managed to make peace with a lot of dark circles that had started to pool in different areas of my life,” he says. “You know oftentimes you don’t have the time or the strength to really deal with those issues or whatever. It’s a bizarre feeling because for the six, seven years prior to that a lot of these demons had started to creep up and take hold of my life in a secretive way, so to actually face up to them was bold and kinda scary.

“I can’t say the day I left I was like, ‘well that was great’, you know I was still pretty fucked up – maybe fucked up is a little strong – but a couple of months after that I started to realise what had happened to me up there. And during that time I also realised I’d made an album. Before that I’d thought I’d made maybe some demos, but as I gained perspective I realised I should make a record of that event.”

The ‘net is already abuzz with takes on how Vernon’s time spent alone in the woods contributed to For Emma...’s haunted, tranquil folk sound: is it strange, I ask, that there should be this fascination with what was originally intended to be an intensely personal period?

“I thought about that and theoretically it would make sense that it would be hard, but I think with music in general, you know even if it’s a party band they’re usually pretty personal expressions of some greater idea. I’ve got so many incredibly touching stories from people with experiences they’ve had with the record; the fact that I might have had something to with helping somebody through something or at least expressed something that was going on in their life, you know that’s why music exists.”

With such a nakedly introspective set there is always the danger the emotional baggage will overwhelm whatever merits the material might have in a live setting, but Vernon insists he still takes pleasure in performing the record (“I’m still discovering little niches and corners to hide in… those songs are still mysterious to me”). The experience has clearly impacted on plans to record new material, however:

“I’ve had a lot of ideas but what I’m trying to do as a conscious move is I want to go in and record and write at the same time again,” he says, before adding, half-apologetically: “I mean I won’t go to the woods or any crazy shit like that, but I can’t really write with a guitar anymore, it feels really awkward. I need to be there working with the computer or looking at the tape or doing something with layers for me to get an idea that feels comprehensive out. I also like the idea of making a record rather than a bunch of songs. I want to do it all in the same time period so the songs come from a similar place.

“Everybody’s shedding skin every three or four months, I remember when I was a kid I would measure time by tubes of toothpaste, because I always felt like every time I got a new tube I’d shed a bunch of skin and grown up a lot more. So it’s like that three-month thing, I wanna try and do it all in one toothpaste tube. Maybe I don’t brush my teeth enough…”

Vernon also learned the virtues of self-censorship without bandmates to bounce ideas off during his stay, but is anxious to avoid any notions of Bon Iver being seen as an intrinsically lone pursuit, in instrumental terms at least:

“The way I could see doing a band thing is if I was looking to put together like an orchestra, like two drum kits, five guitars and a French horn. You know if I wanted a specific vibe that I couldn’t get by overdubbing stuff, and that’s something I think about a lot ‘cos I don’t want to get into habits... But I don’t want to get different writers involved; I feel like I have enough to extract and I don’t need to collaborate with the creative process.”

Sometimes when you’re interviewing you veer off tack somewhat and end up with a rag-tag bunch of questions at the end like so many superfluous bits of jigsaw. As it happens, I’m sure there was a seamless way of tabling the question of why Bon Iver’s Myspace lists 'the excavation at Kumran' as its sole musical influence, but I haven’t the foggiest what it might be.

Vernon laughs his jovial laugh, and my sense of professionalism remains precariously intact:

"It’s referring to the excavations where they found the Dead Sea Scrolls. When they found them it changed the whole course of Christianity, whether people wanted to know it or not. A lot of people chose to ignore it, a lot of people decided to run with it, and for many people it destroyed their faith, so I think I was just looking at it as a metaphor for whatever happens after that is new shit.”

“Exactly, a huge one... the end of a toothpaste factory. That excavation, I love that because it shows how people really need to wake up and learn; they can choose to look things like that in the eye or they can ignore them and scoff at them or whatever. And that’s how things felt to me, like a closing of an era. It felt like I literally got to be a new person.”

Glad to know ya, Justin. Toothpaste and all.

For Emma, Forever Ago is available from May 12 on 4AD; expect a review some time this week. Bon Iver (MySpace) will play a whole bunch of music at the following venues over the coming weeks, including a rather splendid-looking, DiS-sponsored bill with Jens Lekman at London's Scala later this month.