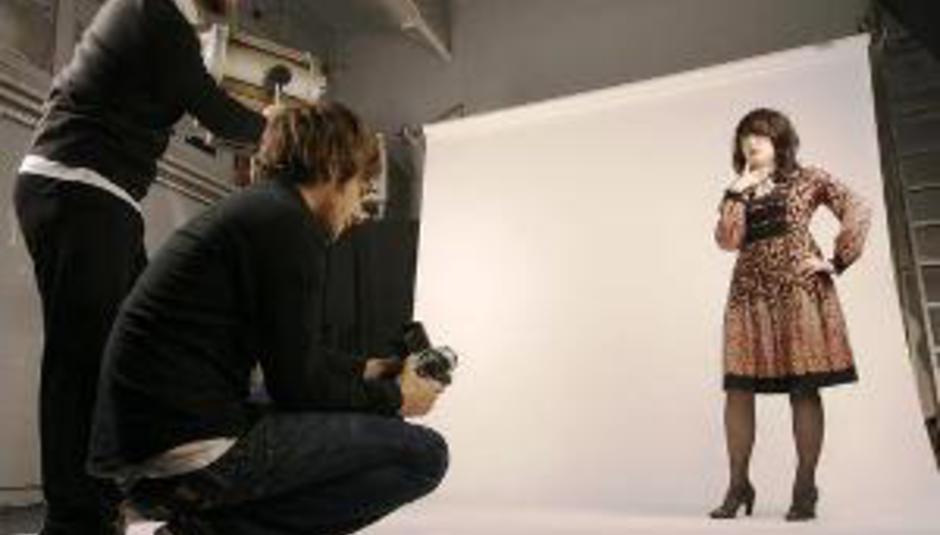 Handclaps, keyboards and harmonies: could three ingredients be any more integral to the sweetly-baked delight that is indie-pop? Here at DiS we certainly don't think so and that's why our eyelids have been fluttering in the direction of sprightly scousers Elle S'appelle since the release of 2007’s giddy, hook-splattered debut single Little Flame (review here).

For just over a year now, the trio of Andy Donovan (bass), Lucy Blakeley (keys) and Owen Cox (drums) have been flying the flag for Liverpool’s Bosspop revolution with a gorgeous waft of bubble-gum chomping melodies. In that time they’ve dazzled the airwaves for the likes of Lamacq and Lowe whilst building up a smitten of rosy-cheeked admirers through the strength of their phosphorescent live showings.

So before the ageing process kicks in and these chirpy upstarts succumb to the perils of beer-bellies, mortgages and bairns, a world-weary DiS caught up with life-long Evertonian Andy to find it what it’s like to be in one of Britain’s cheeriest new bands…

Evening Andy. Let’s get straight to it: surely you guys can’t always be as happy as your songs would have me believe?
Andy Donovan: You know I would say more often than not we are. We’re doing what we’re doing and we’re happy doing it. I can honestly say we’re never happier than when we’re on stage. I know it sounds like a cliché but it’s all about the audience. Even when you’re touring round playing the same songs ten nights in row, when there’s someone bouncing around in front of you can’t help but buzz off it.

Ach, and there I was hoping this would turn into a half-hour moan-a-thon. Anyway, there seems to be a bit of a buzz round the banks of the Mersey at the moment. How did you guys become a part of the new Liverpool revival?
AD: Well, when goFASTER (fellow Scouse jingle-merchants) initially got together it was to a brief along the lines of: “We want Liverpool to have loads of good bands again”. So they pulled their resources and blew everyone in Liverpool away with what they were doing. Meself, Lucy and Owen were all in different bands at that time and the three of us thought, “let’s do something like that”, and put a band together with a bit of an idea and make as big an impact as them.

So, do you think there was a lull in Liverpool’s music scene at the time?
AD: I don’t think so. After the Deltasonic stuff with The Coral and The Zutons there was quite a big divide between indie and alternative music in the city. At the time, I was a frontman for a band that was very much part of the rock scene and - while I didn’t get involved - there was a bit of an ‘us and them’ mentality between those who thought The Beatles were the Bible and the people like us who were influenced by American indie-rock. But it just kind of seems like everyone is in amazing bands at the moment, like Hot Club De Paris, goFASTER and ourselves – we go watch and support each other all the time.

Sounds vaguely familiar to the pack-like mentality of the Glasgow ‘Chateau’ scene from a few years back, doesn’t it?
AD: Yeah, I guess it does. People outside call it a scene but it’s not really. It’s just a load of mates who are in bands that are very like-minded and focused on making great music and getting it out there. It’s like a big family really – we even have a five a-side game on a Saturday then have a few drinks and watch the football together… There’s nothing that’s too industry, or geared towards being commercial; it’s all really good stuff that deserves recognition outside of the fact that it could end up getting commercial success.

And are you interested in becoming commercially successful?
AD: Not really to be honest with you. I mean, it would be nice to think that after a couple of indie releases the industry will notice us and we’ll maybe be able to make a little bit of money from it to achieve what we want to achieve, but I think you can angle yourself towards that too much. Any industry attention we take with a pinch of salt.

You guys had only played one gig before your demo was picked up by 6Music. Do you ever worry you may have peaked just a little too soon?
AD: I think if it’s all going to come crumbling down there’s nothing we can do about it. The way I see it is, as long as we’re writing songs we’re happy with and people are still coming to see us and are having a good time then we’ll have a good time doing it. I think the media have been really great with us but it can just come out of the blue and if you grab on to them and say “this is what we’re doing” it’s just setting yourself up for a big fall. The phone could stop ringing tomorrow and people could stop booking us, so we’re just doing it for the love of doing it and not taking ourselves too seriously.

Probably for the best - us sweat-soaked hacks are a fickle bunch at times. Anyway, I was going to attempt this interview in French but, alas, I failed to get past bonjour. Is the name inspired by the brilliance of French pop perchance?
AD: Nah, not really. There’s just something a little bit more classy about the French; y’know their football and their style. But to be honest with you, I was watching The Simpsons and Bart sprayed ‘El Barto’ on a wall and I thought “that’s fucking great.” So I put ‘El’ in front of everything until I saw El Nino and dropped that idea. Then I typed in ‘El Sapel’ into a language converter and it corrected me in French with Elle S’appelle - it clicked with me because it’s the first time I’ve been in a band with a girl. Being a melodious pop troupe from Liverpool will no doubt have drawn parallels with certain ‘60s luminaries. Are you sick of being consigned to stereotypes?
AD: I’m not arsed man, if people want to call us shit-rock or whatever it’s up to them y’know. You can pick up an instrument and try and be the same as everyone else or you can try and do something different. That’s what we’re trying to do by making interesting music that doesn’t have to be for everyone. In Liverpool people are calling it Bosspop but, at the end of it, it’s good intelligent pop music you can sing along to.

Aye, sing along you certainly can. But, if you’re not the typical Beatles-aping Liverpudlian outfit, what’s inspired your jaunty tune-smuggling?
AD: Sound-wise, it’s quite reactionary. I’ve always been in guitar bands and I always paid attention to reviews which basically said, “the music’s good but it’s just four lads playing guitar”. So from those I just thought about creating a three-piece pop-punk band but without guitar. I’m still writing the same songs as I was when I was 13 but I’m doing it with different people, using keyboard chimes and a female vocal.

Hmm…you didn’t cite Billy Joel as an influence there but I swear I can hear speckles of ‘Uptown Girl’ in your song ‘Monkeyshine’.
AD: [Laughs] Actually, someone told me about that fairly recently, but I’ve never noticed it before. People always quote other theme tunes and say our tracks sound like this or that, but I’ve never ripped anyone off. I just think we have really playful melodies and people really like the delivery of them. The songs have a little bit of ‘oomph’ compared to a lot of today’s indie bands. A lot of them say, “It’s not about having a competent singer, it’s about passion”. But if you can actually sing and have the passion you’re well on your way, y’know. Lucy has an amazing voice and I try me best so I think we pull it off well.

I'd have to agree with you there Andy. So what’s on the horizon for future?
AD: We’re gearing up for this Bosspop tour with goFASTER (remaining dates below – Ed) and we’re working on a big support slot and some other gigs with bands we’re big fans off. Then in March we want to take it up a notch and hopefully release an EP in late April. And once Lucy’s finished university (perhaps unsurprisingly she’s sitting a Popular Music degree) we’ll put our all into the album. I’ve got a bunch of songs ready to put out now so hopefully that will come out this year.

Tres bien monsieur. And finally, I was wondering whether you could tell me how many successive handclaps it takes before it becomes a ripple of applause?
AD: [Laughs] I think it’s 17. It’s an out of time number; an even number is fair play but with an odd number you’re definitely just applauding.

Well in that case, DiS salutes you and your lovely band with 17 claps of its hand. Thanks very much fella.

Elle S'appelle are touring the UK over the course of February as part of the Bosspop tour with goFASTER. Remaining dates:

Their Myspace can be found lurking around here