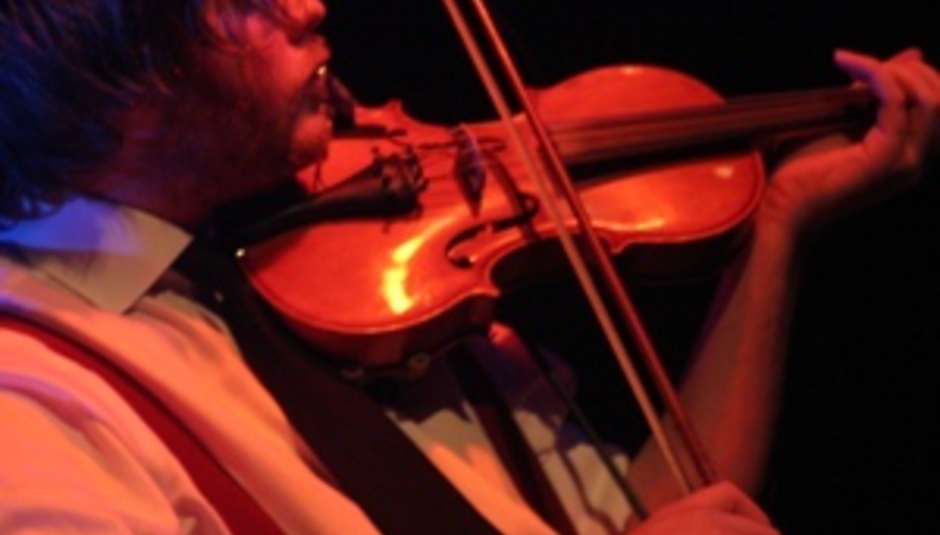 Before we get stuck into Billy’s interview, it’s worth noting that, of late, few bands have cropped up in bar-side conversations with management / booking types as frequently as Broken Records. That they’ve a buzz building about them is undeniable, and by the time they come to London in April chances are the industry’s more discerning A&R folk will be swarming. One of our Early Doors picks earlier in January, it seems likely that the Scots will be the band from said selection to truly make waves in 2008. And, personally, I have to extend a thank you to Billy for alerting DiS to their brilliance with this live review from October. I can’t wait to finally see ‘em for myself at April’s DiScover Club. MD

Tonight, Auld Reekie is fucking Baltic. The afternoon’s granite sky has succumbed to a pitch black canvas across which bitter, gale-force winds paint merry hell over meticulously structured barnets and the chaos-spawning menace of snow is but the blink of a frozen eyelid away. Aye, this is Scotland in January alright, and as a sniffling, snot-plagued DiS nurses its ale in an olde watering hole just off the Royal Mile with Andy Keeney and Ian Turnbull – two exquisitely bearded members of much-vaunted Edinburgh tune merchants Broken Records - we’re already dreaming of summertime jaunts to more tropical climes.

But these are the kind of conditions in which this bewitching ensemble of old university chums thrives. The band’s expansive, blustery orchestration and reflective lyricism has been warming the cockles of punters across Scotland since forming as a septet at the backend of 2006 and, following the release of a superlative-absorbing debut EP [review here], 2008 is shaping up to be the year the currently label-less group kicks up a storm all over the UK.

So before the inevitable bandwagon sets into gear, DiS chats to Andy and Ian about their impending foray down south, finding the perfect label and getting to grips with the hype…

In keeping with the journalistic need to create languid comparisons, you’ve been dubbed a Celtic Arcade Fire by us word-weary hacks. Are you concerned about being pigeonholed so early in your career?
Andy Keeney (drummer): It’s inevitably going to happen if you turn up on stage with an accordion, wearing braces and a waistcoat, but we would like to shy away from it. A lot of the comparisons are visual and aren’t reflected in the music at all.
Ian Turnbull (guitarist): When I was speaking about this before I said we played Russian Danger-Folk but, really, it’s just a bunch of people who want to make as big a noise as possible with as many instruments as they can.
AK: I suppose it’s easy on a descriptive level when you can’t give a succinct answer but the problem is that you can end up labelling yourself an early-Waterboys meets Beirut in a car crash, when it’s actually a lot easier to give someone a CD and let them take what they will from that.

Good point. Talking of CDs, your self-titled debut EP has been unanimously praised. Does the hype concern you, considering the number of local acts that have failed to make the grade outside of Scotland?
IT: The hype machine backlash is worrying, but I think it’s more difficult to do that now with the rise of the internet. You don’t just rely on the views of the press anymore; the public are far more involved than ever.
AK: I agree. The good thing about being in a band today is that no-one can be ditched on the basis of one bad review. There are still other forms of media that can invoke discussion and stimulate audiences.

A bit like the DiS message boards, perhaps? Anyway, moving on: every track on said EP is a flourishing, gut-churning epic – is this something you strived to achieve or is it the unavoidable result of such a large musical collective?
IT: It is and it isn’t. With those four tracks we wanted to get the strongest ones we had at the time down and because it was all done by the same guy, Stevie A. Cute (frontman for local Edinburgh punk-mongrels The Acute), it’s got a very uniformed sound.
AK: Yeah, he got quite excited about being able to bring three cellos into the studio, didn’t he?
IT: We also purposely included commercially sounding songs rather than the more gentile ones. I’ve often thought perhaps those first four tracks weren’t that representative of us. I’ve listened to it back on my iPod and after four listens it becomes pretty tough going; it’s just this relentless wall of sound reverberating around your ears.

Personally, I would say that was a good thing. So, what sort of sounds have influenced Broken Records?
IT: God, I’m into just about everything. The other day I confused the hell out of the guy in Avalanche (a Central Belt-based independent music retailer) by buying a Marilyn Manson album along with a Nick Drake record. So it’s pretty all over the place. Me, Gill (bassist Dave Fothergill) and Rory (Sutherland, accordion and violin player) like our post-rock and instrumental stuff but I think everyone shares a love for Tom Waits and Nick Cave. Oh, and Jamie (Sutherland, vocals and guitar) is massively into Bruce Springsteen.
AK: (Laughs) Aye, it’s like you’re in a never-ending Springsteen karaoke when you’re stuck in a tour van with him for three hours.

Talking of touring, I’ve been impressed with the way you’ve made your name predominantly through live shows rather than merely spamming social network accounts. How conscious a decision was that?
IT: Well before we played T In The Park [last summer] we’d only done four gigs and we thought, “Shit, we really need to get more practice in and sharpen up”. So we started booking more gigs.
AK: And with us there’s always been a traditional feeling that you have to get out and play gigs to catch someone, rather than relying on them to get into you by clicking on a link to a recording that’s not up to scratch.
IT: It’s quite satisfying when you force people into liking your music with the sheer energy of the performance. You’re playing your first show (at the time of the interview – Ed) in London as part of DiS’s DiScover Club in April – are you nervous about the reception you’ll receive in the cauldron of The Capital?
AK: I think there’s still a bit of pre-match nerves with any show, but it’s not as bad as in the past where I was spewing before going on.
IT: We’re more excited than nervous. I think you have to be prepared to dip your toe in London’s murky waters at some point and it’s not all about London; we’re going to try and work out some other shows on the way up and down to try and make it a bit more financially viable.

I interviewed Jamie recently and he said that coming from outside of London has given the band space to grow in a manner that’s perhaps not possible there. Do you agree with his assertion?
IT: I guess in somewhere like London there’s far too much happening and it’s difficult to get noticed.
AK: Your man from DF Concerts (company CEO Geoff Ellis) made the point that if you do something in London that’s a bit interesting you end up getting hyped and generate a bandwagon after four gigs when you’ve not had time to develop yourself. We’ve had countless gigs in the last year where no-one has noticed us and that’s given us time to get tighter and develop to the point where we’re ready to move on. So there’s no danger of someone saying to us, “Right that’s interesting, go and do this”. Then, all of a sudden… (draws his breath) Destitute.

Now that you’ve spent the time tightening your sound, do you feel you’re ready to make the next step and sign a record deal?
AK: Well, we had a few nice Christmas cards [from labels] but it’s all been in a very vague way.
IT: I think we definitely need a label at the moment. We’re pretty much clueless when it comes down to distribution.
AK: Yeah, we need someone with the knowledge to help us progress – we’re a bit naïve in a business sense. Luckily, we’ve got a lawyer in the band (cellist Arne Kolb is a trained lawyer), so we might be a bit naïve but we’re definitely not stupid.
IT: So, anyone who’s out there to try and exploit a band is picking a pretty tricky group of musicians to make a quick buck on.
AK: But, obviously, whoever takes us on is going to have to be aware that we’re not going to be massive and we’re not going to make a lot of money from our first album because we’re not that kind of band.

I think a few folk might disagree with you on that one, Andy. Finally, I read an interview where you said you would like to expand the band’s numbers. Is your plan for 2008 to eventually evolve into the Celtic Polyphonic Spree?
IT: (Laughs) Well, we got pretty damn close with it when we had fifteen folk up on stage with Shady Bard – the poor sound engineer pretty much gave up by the end of that one.
AK: We like the way it is at the moment because we know how we all work together. This year, we’re looking to put together an actual single and hopefully record an album – we want to move away from being another band on stage that people aren’t really that interested in, to a band that people want to come and see. Hopefully, there will be some exciting times ahead.

Broken Records are playing the DiScover Club @ RoTa on Sat April 5 at the London Notting Hill Arts Club with The Monroe Transfer and Vessels. Full details of said show can be found here. Their MySpace can be found here, and a Drownload of 'If Eilert Lovborg Wrote a Song, It Would Sound Like This' is available for free here. Other upcoming shows read as follows: