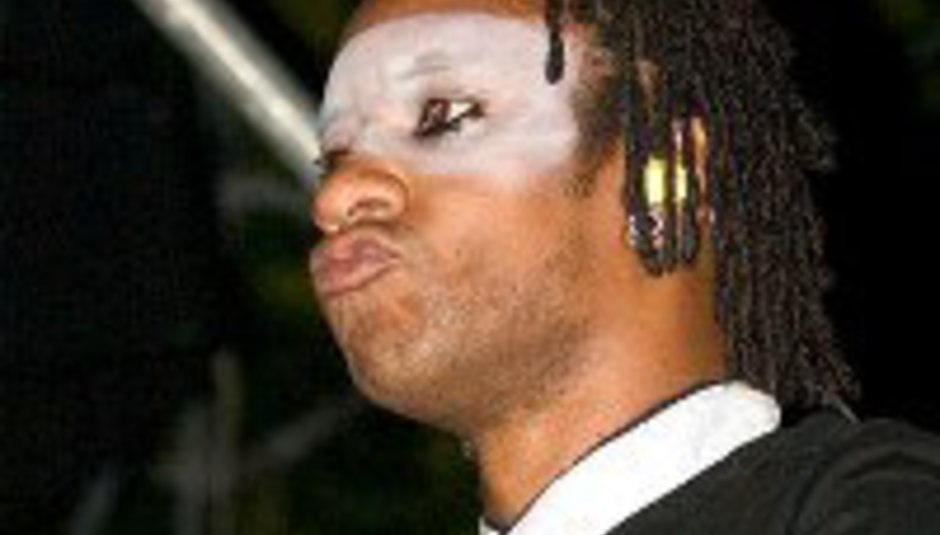 'STATE OF EXIT!’ screams the massive banner pinned to a hillside towering over the Danube. On the hill's summit, facing the Serbian town of Novi Sad, sits the immense Petrovaradin Citadel fortress, built on a plug of volcanic rock by slave labour during the 1700s. Not a bad setting for a festival.

As you know, the English are a discerning and cultured lot. Cough. Which explains why quite so many of us all chose to trek to Serbia for the four-day Exit Festival. With the trillions of Cheap! Unique Location! Three Day Camping! Great Line-Up!s all scrabbling for your precious attendance, it now takes something exceptional to rise above this summer’s indistinguishable stew of Beniglobalatitudewirebury In The Parks; a bill with a phenomenal view (NORTHERN LIGHTS GUARANTEED!!) for instance, or a genuine coup (ELVIS! ALIVE! AND HE’S PLAYING POHODA FESTIVAL IN SLOVAKIA!!).

While Exit has the location aspect plenty sorted, its line-up was, to put it bluntly, cack. Almost all ten (10) recognizable names on the oversized/under-known bill (Balkan Beat Box anyone?) could only have been deemed relevant circa 1998. Beastie Boys, The Prodigy, Groove Armada, Basement Jaxx, Lauryn Hill, Wu-Tang Clan and Snoop Dogg. Precisely. However, get over the Main Stage boasting a maximum of two semi-decent acts per night, and you are left with a festival that, for once, fulfils the tired mantra It's Not Just About The Music.

And how could a festival boasting 22 stages with names like Lush Reggae Positive Vibration Stage, Tuborg HappyNoviSad Stage and Latino Be Positive Stage fail to be brilliant?

The walk from campsite to festival (over a bridge across the Danube) is breathtaking, and is accompanied by a fantastic number of locals-cum-salesmen. Each and every Novi Sad inhabitant is out, fully prepared to cash in on the big event. Entire families line the streets flogging everything from sweet corn (a lifesaver at 7am), to plum brandy, to unthinkable quantities of Exit-based paraphernalia; wooden carvings, paintings, t-shirts (Wu-Tang Clan: Up From The 2007th Chamber). Entering the festival site at dusk on Thursday, we are greeted by the Serbian equivalent of the Red Arrows, soaring increasingly low over us. Considering a member of security tells me this is unscheduled, perhaps people should be more worried than they appear. After Robert Plant and Strange Sensation open proceedings with a surprisingly excellent and energetic set, it's headliners The Prodigy who cause the weekend’s biggest commotion.

Having performed a notorious show in Belgrade in 1995 during NATO’s bombing of the country, The Prodigy are Serbian legends. The band may be finished in terms of productivity, but they still provide a terrifyingly intense live show. A heaving and aggressive crowd meet the 'Breathe''s and 'Firestarter''s of this world as they deserve to be met; like galloping psychos. The crush that follows is not so fun, with hundreds of people swept up and out of the field and several injured (apparently Exit’s Security simply opened the gates for thousands of ticket-less locals to see their heroes). The Pipettes are a just about pleasant way to start Friday evening, occasionally enjoyable if uninspiring. They are not listed on the line-up, which simply says ‘TBA’, adding to the suspicion that the organisers were still groping for Main Stage bands up to the moment people began arriving on site. One band no festival is complete without are the ubiquitous CSS, playing their 184th festival of the summer, and 13th of the day. Then it’s onto tonight’s spectacular headliners the Beastie Boys, three middle-aged men in sunglasses, possibly the world’s most underrated novelty act. Quite what value lies in three rappers performing dated instrumental muzak is clearly beyond my limited grasp. “Sabotage!” chant the Serbs repeatedly, but by then I’ve left to go dance on red beanbags at the Roots And Flowers Stage. Away from the Main Stage, the Dance Arena is a spectacular picture, and the festival’s top attraction for many. Situated in a moat, the only way to approach the Arena is to descend from above, and the sight of the thousands of inebriated, gyrating bodies below is inspirational.

The following day’s line-up contains the weekend’s most interesting performer. The subtly renamed Ms Lauryn Hill is better known these days for saying “I would rather have my children starve than have white people buy my albums” than for her music itself. She’s also renowned for rare though reliably disastrous live shows, and so What A Surprise when she leaves everybody waiting for over an hour. After eventually being told that “Ms Hill has travelled all the way from Dubai on many trains and planes to get here, and although she’s losing her voice she’s still here to play for you Serbia!”, the lady herself finally graces us with her startling presence (though not before a 15-minute jam from her 16-piece band). Looking much like a Martian from Mars Attacks!, she shits on several of her own songs as well as those of The Fugees. For a woman who created such an original and influential album (The Miseducation of Lauryn Hill), her slow, odd decline is sad and seemingly inexplicable.

Saturday and Sunday see a neck-shredding rise in temperature, as the desert overwhelms Exit. A combination of erosion and heat robs the site of all its grass, the result of which is a fuck load of dust that gets kicked everywhere. It’s not long before 50,000 voices are lost and 50,000 noses see their produce turn black. Black bogeys. LOL!

For any DiSers still sceptical of the need for an Exit review on our guitar-minded website, go discover Norwich-based indie group Magoo. Having made small ripples in England over the years, the Chemikal Underground signed band are a festival highlight. Smaller Than You are ace as well; five modest 16-year-olds breathing fresh air into an accessible ska format, with assistance from three dancing teens in terrifying horses heads. And they are also from Norwich. In fact there are four bands from the East Anglia city at the festival, a result of the city’s being twinned with Novi Sad. There’s even a bridge in Norwich entitled the Novi Sad Friendship Bridge. Who knew?

The final night is headlined by Wu-Tang Clan, highlight of the weekend by a half marathon. Despite missing Method Man, the group sounds as effortlessly fresh and raw as it did 14 years ago. RZA’s call for a two-minute silence to honour ODB is heckled down hilariously by his bandmates: “Nah that’s too long… one minute silence… half a minute… alright, 20 seconds.”

With drugs openly snorted, sipped and swallowed around the grounds, belongings were inevitably lost in the mayhem, and Monday morning even saw a visit from the British Embassy, because that many people had misplaced their passports. Considering one beach-side stage had DJs spinning for 23 hours a day, it’s probably putting it mildly to say people had begun feeling a little fatigued come the end of the festival. But what a festival.