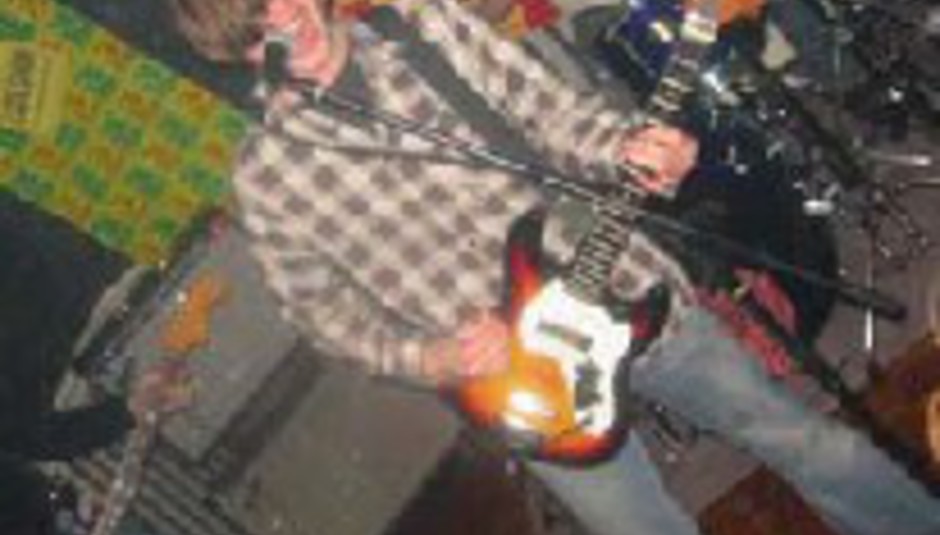 If Manchester still has so much to answer for than I guess nobody bothered to ask the right questions. As the city prepares for the latest Oasis comeback, no doubt superceded by a million and one Gallagher impostors, Nine Black Alps have emerged amidst the black smoke and boggy canal like a Glade sponsored breath of fresh air.

The current line-up (Sam Forrest – vocals & guitar, David Jones – guitar, Martin Cohen – bass, James Galley – drums) have been together for around eighteen months now, and in that time the star of Nine Black Alps has shot through the sky like a tornado, culminating in the band signing to Island records after only a handful of shows.

Since then, they’ve released two critically acclaimed and commercially successful singles (‘Cosmopolitan’ and ‘Shot Down’) with the forthcoming three-minute George Harrison meets Kurt Cobain for a mud ride in heaven apocalypse that is ‘Not Everyone’ set to break the band in the upper echelons of the proper charts, with their debut album ‘Everything Is’ set to follow during the first week in June.

Their videos have been on constant rotation on MTV2, who along with Channel 4, also heavily featured their set at the Texas South By South West music conference during their television broadcasts. And on top of all that, none of the music press has had a bad word to say about them yet…

Sam Forrest: “To be honest we don’t really bother too much about that, so then if…or rather when they do slag us off it won’t make a difference because we never took that much notice in the first place…”
David Jones:”…and I’m sure they will in about a year or so’s time. I think it’s the best thing not to get involved.”

Do you think that one of the reasons why everyone is so positive about the band is because you’re quite difficult to pigeonhole into any current musical scene?

Sam Forrest: “We never set out to be just A.N.other band following whatever’s trendy at the time. We’ve always made music that sounds right to us and if other people like it too, then, great. I think it’s a really positive thing that we’re difficult to pigeonhole because when all the scenesters are gone, we’ll still be here, doing what we’ve always done.”

Being based in Manchester, its fair to say that Nine Black Alps are probably as far removed from what the stereotypical Mancunian rock band is expected to be like as it’s possible to be. Along with kindred spirits The Longcut, Nine Black Alps appear to be making a statement that its not all long black overcoats and Stone Island jumpers along the M61, which in some ways makes them true outsiders and therefore the living embodiment of an ALTERNATIVE to the mainstream.

David Jones: “To be honest, I’ve never owned a Manchester band’s CD anyway…”
Sam Forrest: “I think the first Oasis album is actually quite thrashy, certainly when you compare it to what came afterwards at any rate…”
David Jones: “While we respect what bands like Oasis and the Stone Roses have done for the city, they don’t really have any bearing on what we’re doing now or what we’re likely to d in the future. Manchester just happens to be where we live, nothing else…”
Sam Forrest: “We’ve always liked the idea of being freaks!”
David Jones: “We’re not trying to emulate anybody else. That would just be pointless.”

And what about other bands’ reactions towards Nine Black Alps? There have been suggestions that certain other “names” have been a bit resentful about the speed of which Nine Black Alps got themselves a record deal and nationwide media attention whilst never embarking on the “toilet circuit” like most of their contemporaries.

David Jones: “It feels like we’re doing that now!”
Sam Forrest: “I don’t know about that. I mean, we’ve all been in bands before, we’ve all had to get our hands dirty at one time or another and we’re all pretty aware of how fickle the music industry can be.”
Martin Cohen: “I think as well that if what you’re doing feels right and other people think it sounds right then it shouldn’t make any difference whether you’ve played 1 or 100 gigs.”
Sam Forrest: “I think the hardest part of the process for us is that we’re having to grow up in public now.”

Whilst the band have drawn obvious comparisons with the likes of Nirvana and the Pixies to the quiet-loud-quiet-loud structure of their songs and angsty nature of their lyrics, but to these ears, Nine Black Alps are almost like the acceptable face of (and thoroughly British antidote to) skater rock.

Sam Forrest: “None of us have ever owned a skateboard, but I can see where you’re coming from…”
David Jones: “The thing is, me and Sam have known each other for a long time and we both got asked to join another band at the same time, which the idea of playing in what we thought was a punk band seemed brilliant at the time, but at the same time we had these songs and we thought why not start a band ourselves…”
Sam Forrest: “Funnily enough, a lot of the songs actually started out as acoustic numbers, but with time they’ve grown and grown into what you’re hearing now.”
David Jones: “It’s weird in a way looking at how the music has developed when you think of each individual’s influences to be honest. I mean, I’m a huge Godspeed! You Black Emperor and Explosions In The Sky fan, and I remember when my friends first came to see us play expecting something along those lines…”
Sam Forrest: “…but instead getting these three minute noise infiltrated pop songs! Some of them haven’t been back since.”

And then of course there’s the band’s name. Sylvia Plath references aside, my first impression on hearing that a new band had emerged from Manchester called Nine Black Alps was met with some trepidation as the thought of more Doves-alike slow burners didn’t exactly fill me with much excitement. But then I heard ‘Shot Down’…

Sam Forrest: “Everyone always asks us about the name, but to be honest, we weren’t trying to be all clever like “Oh, we read Sylvia Plath every day” or anything. It was more about trying to give ourselves a name that didn’t immediately sound like that of a band. I mean, I like bands such as the Doves…”
David Jones: “…although I’d be worried if people dismissed the name as being that of another Verve rip-off!”


There’s a lot of anger in the songs though, a lot of frustration. For example the first line of ‘Over The Ocean’ claims “I don’t wanna be anywhere, I only want to be somewhere”, while the likes of ‘Unsatisfied’ and ‘Not Everyone’ also suggest a band not entirely happy with the world around them at the moment.

Sam Forrest: “I guess most of the songs are about alienation. Its all about the way I’m feeling while I’m writing I suppose, and most of the words tend to subconsciously fit the mood of the song. I mean, it’d be nice to say that we’re really complex and there’s a hidden agenda with every song but…again that’s what makes us. I write most of the lyrics and then we just thrash hem out into the course of a song. I guess I’m at my happiest song writing when I’m feeling down!”

Their first single ‘Cosmopolitan’ just missed the Top 40 by a couple of places, while its follow up (‘Shot Down’) almost gatecrashed the Top 20 earlier this year. With the third single about to be released and an album on the way soon after, do Nine Black Alps feel under any pressure from the record company (Island) that they have to go one better in terms of chart positions and ultimately sales returns?

Sam Forrest: “To be honest I never look at chart positions. I have the same opinion about this as I do with the reaction of the music press. So far the record company have been great. They’ve given us total freedom in what we release as singles, total freedom for what goes on the album and what doesn’t, and even our artwork is all done by our friends.”
David Jones: “The only disagreements about what gets released and what doesn’t are between ourselves. Funnily enough ‘Cosmopolitan’ wasn’t originally intended to be a single. It was actually going to be on the b-side to ‘Shot Down’, which was going to be the debut single…”
Sam Forrest: “I hated the original version of that song (‘Cosmopolitan’), so we decided to re-record both that and ‘Shot Down’ and the second version sounded better to be fair but…”
David Jones: “…but Sam got outvoted by the (other) three of us and ‘Cosmopolitan’ came out as the a-side!”
Sam Forrest: “I just think that the other singles were really obvious choices, even the next one (‘Unsatisfied’) seems a logical follow-up to ‘Not Everyone’, but at the time ‘Cosmopolitan’ would have been my last choice for the lead track on the first record.”

But if things were to turn a little sour somewhere down the line and the head honcho from Island Records was to summon you to his office and say, “Now lads, let’s talk about a change of direction…”

David Jones: “There’s no chance of that ever happening. They knew what they’d got when they signed us. If they wanted something more mainstream, more bland, there’s plenty of them out there. I’m sure they would have got them first.”
Sam Forrest: “The good thing from our point of view as well is that our manager at the record label used to be in a band so he knows all about the whole issue of being true to yourselves and keeping your own identity. If anything I’ve been pleasantly surprised by how supportive the people at the label have been. We were warned to beware of a lot industry suits as an awful lot of backstabbing tends to go off in this business but so far we haven’t seen any of it.”

Before we say our goodbyes, Sam will declare that he wants to film their next promotional video in Chernobyl and hopes none of the band are ever asked to do ‘Never Mind The Buzzcocks’, as he hates the concept of “Pop stars as celebrities”. Meanwhile, David will admit that although file sharing is illegal and could potentially cost the band a substantial amount of revenue in future sales, he does his fair share of downloading so to castigate anyone else for doing the same thing would “just be hypocritical”. Manchester, you have been answered.