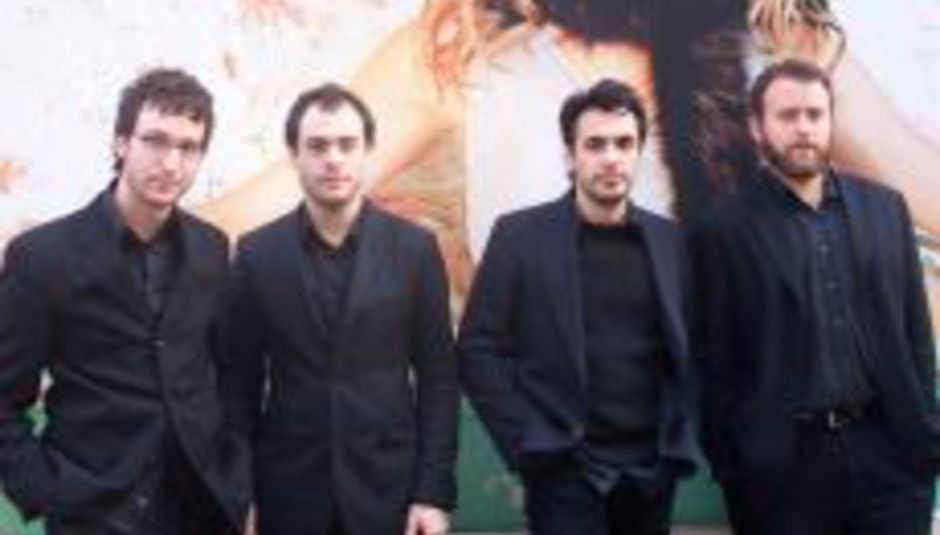 "Being a human being I kind of dig being liked by other people."

"Being a human being I kind of dig being liked by other people."

by DiS News February 24th, 2005
Hi Silent League. Nice LP. We first checked you out doing a dual gig day at the Notting Hill ROTA club, followed by supporting Interpol at the Kentish Town Forum – how was that? Sounds a little crazy…

Justin: Hey thanks. Yeah, the Interpol show was a bit ‘interesting.’ I think everyone was just amazed that we were there at all…without amps. Either way, I hoped you liked it.

Shannon: Thanks for coming. In some ways you really haven’t seen The Silent League, just a little promo trip with a couple of people from the band and some acoustic instruments. The plan was to play a couple of record stores and pubs but the bookings got bigger and bigger and suddenly we were onstage at the Forum with 4 people and a ukelele and glockenspiel. Imagine being onstage at the Forum opening for Interpol with a glockenspiel and melodica going “lalalala” in the face of 3000+ kids in the mood to rock. That’s how it was. I thoroughly enjoyed it, but then provocation is a hobby of mine…

Ryan: Opening for Interpol as an acoustic 4-piece was the closest I’ve ever been to being in a punk band. Those lalala’s should stick with me for quite some time.

We at DiS like to think of ourselves as being reasonably well-informed, but even we made mention and comparisons to Mercury Rev – is this getting to you? Or is it perfectly fair and reasonable?

Justin: That’s simply the way it is and I don’t really mind at all. The comparisons are logical, considering the situation, and most journalists have also been quick to add that the differences are far more relevant then the similarities.

Shannon: We don’t dislike Rev and it’s inevitable that journalists are going to work it into the back-story they paint because of Justin’s tenure with the band, so we expect it, at least initially as people are trying to find away to introduce the band. That’s what journalists do, right? I think there are some very obvious and important differences, but, whatever...

How are you doing in America? You seem to be getting a lot of love in the UK – why do you think bands like yourselves do well over here, yet sometimes not quite as well Stateside?

Justin: Oh cmon, that’s an easy one. Because England is still holding onto to what important in music and America is just a cesspool of corrupt capitalism.

Shannon: I think the primary difference is one of size and scale. America is ridiculously large and fragmented -- geographically, culturally, economically…there are other reasons but I’m neither qualified nor too interested in discussing the business of music and how to more effectively “penetrate the market” with my ‘product’. I’m pleased that so many people here seem to connect with it. Being a human being I kind of dig being liked by other people. Sometimes it happens.

At the moment, it’s all Gang Of Four type bands ruling the indie kid’s hearts in Britain – what’s your take on that? Ever had a desire for staccato riffing?

Shannon: As often as I get the urge to wear leg warmers and watch Pretty In Pink. It happens but...

Justin: Who is Gang of Four?

DiS is off to NYC in a fortnight, where should we go for a good breakfast? And to buy some records?

Justin: I generally don’t take a breakfast but I do love eggs and you can get them at Shuckys on 3rd an and Ditmas 24hours a day.

Shannon: For breakfast, hit the B&H Dairy on 2nd avenue and St Mark’s. If there are more than five people you won’t fit. The challah bread and whitefish salad are unbelievable and you can get homefries, eggs, soup and challah for a couple bucks. Then you can go around the corner on St Mark’s to Kim’s Music and Video. Best place for used stuff. Other Music is a couple blocks off and worth a stop. For vinyl there is a new record store on North 6th in Williamsburg, Brooklyn, a couple blocks off of Bedford. Ask around. It’s worth it.

Ryan: Big fan of Essex, on the corner of Essex st. and Delancey St. in the Lower East Side. Make sure you take a nice long brunch there Sunday morning; fantastic bisquits and gravy (a not so guilty pleasure) and unlimited Mimosas. Probably my favorite restaurant, Las Melissas, lives at the intersection of Myrtle Ave. and Broadway in East Williamsburg. Pork chop sandwiches, meatloaf, fried plantains . . I’ve yet to have anything less than excellent. Plus, their memory is very good, they’ll know you after a couple of visits. Nothing beats that. Nothing.

How was the recording session you did over here? Get up to anything special? Was that a time thing? Or did you want to do something on these great shores?

Justin: It was great. Just a short thing…mostly to see if we liked a particular studio. We do plan on returning to do the proper second album here though….very very soon.

You’re playing with DiS’ Redjetson on the 28th at the Barfly, London. Will you be checking them out? (hint hint)

Shannon: Of course. I’ve heard good things about them…looking forward to it.

Justin: I’ve already spied on them and I liked it. I downloaded the song ‘divorce’ because I just got a divorce and I wanted identify with someone else who’d had that experience but the mp3 was truncated so, unfortunately, I will have to wait to see if we are kindred spirits.

SXSW is on the agenda for March, we’re going there too as starry-eyed Texan virgins.. have you been? Got a couple of pointers?

Shannon: It’s the music industry’s own Mardi Gras, you will not want to come home. It’s all in the preparation, get a schedule early, plan your warpath appropriately, make sure your pharmaceutical needs are fulfilled in advance. Plan to stay a day after the festival, go swimming in Barton Springs, watch 10 million bats launch from the Congress Avenue Bridge at dusk with your partner/chemical/love interest of choice. See The Silent League and Ambulance Ltd on Saturday night. Everything else will fall into place.

Ryan: I quote Shannon: “you will not want to come home”. Walking down the main drag at all hours gives you the opportunity to drop in any number of bands working in any number of styles. Literally, every other door has a wildly different sound emanating from it. Had the chance to see some fantastic groups that I may have never discovered otherwise. Pretty much can’t wait!

Why did the Orchestra refuse then? And can’t you just use one of those fancy keyboards like everyone else does nowadays?

Justin: Ha! To get to the other side of course.

Justin: Wow. Eggs. I could talk about that for ages! You could spend two pages on poached eggs alone. Before I became a man I often wondered whether or not Eggs Benedict had anything to do with the infamous historical traitor to the American Revolution, Benedict Arnold. I wondered this primarily because I knew of nobody else with the name Benedict. But while I had only the vaguest notion of who Benedict Arnold was and what he did and why it was bad, the story cast a long shadow of darkness over what might otherwise have been, should have been, could have been a perfectly delightful breakfast. I had to research this in a set of Encyclopedia Brittanica’s I stole from the local public library but it wasn’t really stealing because isn’t knowledge a public thing that should remain free? My scholarly activities laid the groundwork for an adolescent infatuation with eggs untainted by the weight and dogma of history, or historical revisionism, and anyway the point is that there are many ways to eat an egg. I could positively live off omlettes which, for some time, I confused with fritatas, which I prefer because you stuff a lot more of the goods in a fritata, right? There was a period of time I went through where I couldn’t eat eggs because I saw that one Kids In The Hall episode where the chicken lady goes on a date and she makes her date dinner and she gives him eggs and he starts to eat and she says that they are fresh, “straight from my body and onto the plate, yah!” which totally freaked me out. But I got over that. Good thing too, cause you know, what’s life without eggs...

Justin: I can say no more. You know too much already.

Ryan: But then it wouldn’t be a secret anymore.

Shannon: I’d hate to be so presumptuous... Our friends Akron/Family are about to put out an incredible record on Young God Records in March. You may not know NYC’s Doveman but you should keep your ears open for that. Their record won’t be out until the spring but it’s some of the most unexpectedly beautiful live stuff I’ve witnessed in NYC. And do you know Sightings?

Shannon: Since we’re on ‘death’ and ‘Austin, Texas’ themes, Bedhead’s classic “What Fun Life Was” should carry you home.

Ryan: ‘Winter in the belly of a snake’ by Venetian Snares.

Justin: ‘Alan is the heart’ by Julian Miles

Shannon: And other myths…hell if I know.