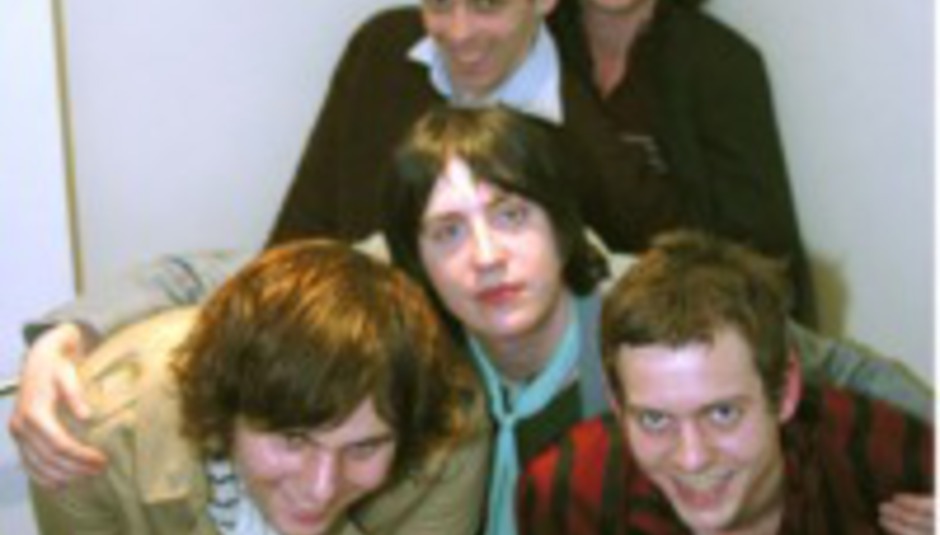 by Rosanna Alam October 29th, 2004
Just before an Evil Rocks gig at the Islington Bar Academy -I manage to round up all five Special Needs boys and squeeze them into a closet room backstage. For a band who has just been on the road after playing a gig in Cardiff, landing in London at 3am and having to keep it together for an XFM session before tonight, it wouldn’t really be surprising if they were a bit frazzled.

But these young scallies are pretty much revved up to go as they playfully lark about. The only one thing that puts a dampener on their free spirited frolicking is their disheartening surroundings.
“This venue’s really poor. It doesn’t inspire us at all. We’d rather be somewhere like the Infinity Bar or play somewhere where there is excitement in the air,” says guitarist Andrew, lounging in a red and black pin striped blazer.
Other guitarist Daniel vents: “It’s in a bloody shopping centre and seriously lacking in atmosphere.”
Further revelations come from lead singer Zachary.
“Last time we played here we had to tell the management to turn off Hell’s Kitchen playing on a screen behind us.
“It was quite distracting but very entertaining at the same time,” pitches in a wispy poodle haired Phil, who plays bass.

However, this doesn’t stop them from later wooing the audience into a frenzy, mainly generated by doting female members lunging at the stage while reciting their songs wholeheartedly back at them. This alone is testament that this London band is destined for greater things. But when it comes to being dazzled by the same fame promise as their contemporaries, Special Needs are far from bothered.
“We feel absolutely no pressure from having to live up to the likes of The Libertines or Razorlight because although they are decent bands, we’ve got our own agenda and don’t feel they bare any importance on us whatsoever,” says Zac - a charm for those who are a sucker for a doe-eyed, dark haired, suave Southern Irish lad.
He adds: “There was this programme for the BBC about DIY Dalston guerrilla gigs.
“We were just wondering whatever happened to writing songs and bringing beautiful melodies to people?”
This leads to a further rant from Andrew: “People just seem too obsessed with playing tube trains. It’s quite exciting in a way but we’ve still got to listen to crap on the tube.
“Just because someone who’s been in the NME is doing it, it doesn’t make it anymore exciting.
“A lot of London bands at the moment just want to take crack, wear stupid hats and write songs about being sick in the gutter. Every band I see is like that at the moment.”

Such a bold statements from one’s so young – so who exactly are these sprightly souls? Well for a start, Special Needs are far more content with escaping the mundane and enjoying the simple things in life without all the hyped up heights of hedonism. With a sixties meets new wave punk sound and with more sha la la la la, do –wop choruses than you can shake a stick at, they are noticeably musically vibrant. I’m told that most of their inspiration comes from dogs on streets, conkers, darts and other such innocent things. And there has been talk that they are the “Gay Razorlight”, while others have branded them as a cross between “Sho-wadi-wadi and Shakin Stevens”, all of which they find flattering compliments.

“I think because our music goes back to the 50’s, 60’s and 70’s we have a lot of old fans. I don’t know if their interest is primarily musical or sexual. We’re pretty good looking gentlemen, but girls our own age don’t seem to have an interest. With the older generation we’re some sort of pin-ups,” explains Andrew mischievously.
“We’ll be doing a tour of old people’s homes next month,” adds Zac showing off his piquant wit.

Jesting aside, there is a certain excitement to them. With an infectious pop sensibility, they are also able to carry over an honest raw appeal, which pioneers the legacy of hero’s like The Kinks and Phil Spector. And the tunes are just the beginning of their journey, as they intend to use this as a platform to build -up their own little cosy fun filled creative hot spot.
“We want to buy a pub and call it Blue Skies, where we will record an album to be named after it. Blue Skies will be a community – a permanent fixture of hope,” explains Andrew unable to contain his excitement.
“It’s kind of like bringing out side streets into a main road, where you’ve got Smiths and Virgin on either side and then you’ve got Blue Skies smacked right in between them.
“It will be the loveliest pub and the most grandest building in the town - we’re all going to work there. I’ll probably be the bar tender, some of these guys will clean the darts board and everyone will live there.”
Phil adds: “Anyone is welcome to join us including comedians and puppeteers.”
This is followed an impromptu puppet mastering attempt by Andrew with a bottle of Carling, giving licence to a lot of sniggering – more notably from Neil, the drummer who although is very quiet, is one of the main attractions on stage for many a roving eye.

Plans for this utopian venture have already begun with their debut single, Francesca, released earlier this month through Poptones. Although, they’ll be the first to admit it isn’t one of their most cheerful tunes.
Andrew, who proudly wrote it, says: “It’s a love song to no one and about getting back the same enthusiasm that you had when you were 15 or 16 as well as trying to get a sense of joy out of your body.
“Ironically, it’s probably one of our most maudlin songs, as the others are like the happy fucking clappers most of the time.
“But we thought if you’re going to put a single in October, you’re going to want make it sound like it does around that time of year.
“Our next song will probably sound like the Bay City Rollers.”

As for a debut album, it's already in the making but the band seem determined to stick to their philosophy of not being caught up in the whirlwind of the music industry.
They hope to “keep it real” and have decided their album is going to be produced by themselves. However, they admit they are not adverse to a local bar man or Tony Mortimer of East17 producing it if either are willing to offer their services. One things for certain, unlike others, they remain humble and spare us such passé statements like “we are the best songwriters of our generation.”
“We’re aware that we are never going to really make any money out of playing music but it’s just about being able to spread some joy. We don’t want to be a band where we’re just a poster on a tube wall. We want to be like the Goons,” says Andrew.
He adds:“We spend most of our time just japering around. I don’t think we ever do anything. We practice once a month and the rest of the time it descends into crap. I think we’re pretty good at that, and I think that’s where our talents are going to lie in the future.”