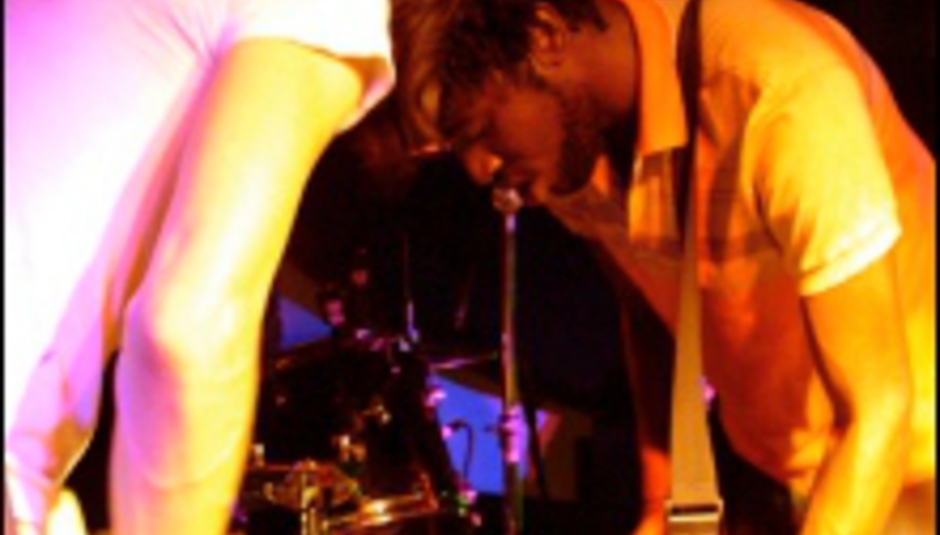 by Sean Adams August 26th, 2004
Off to The Carling Weekend? Not sure who you really really have to see? Here's our guide to ten of the very best.

Bloc Party
Radio One stage
Saturday Reading (12.50-1.30) / Sunday Leeds (12.45 - 1.15)
They’re so hot right now! We’ve been banging on about them at DiS since last summer (look at us… we’re so hot right now too!). Hipsters are talking about them as the new Franz, the media are still mumbling about them being the new Blur. Whatever. They’re doing the exact same slot Idlewild did in ’98. They rock live. And they’ve just finished their debut album which is due out early next year. Dance.

dEUS
Radio One Stage
Sunday Reading (5.45-6.30) / Friday Leeds (5.20 - 6.05)
Pop-bending at its Flemish finest. If your world hasn’t yet been touched by Tom Barman’s warped words or gigantic fuzzed up melodies, then get yourself along to this. It’s the first time they’ve played the UK in years. Warning: you may see grown men crying.

Devendra Banhart
Carling Stage
Sunday Reading (8.30 - 9.15) / Friday Leeds (8.10 - 8.55)
A singersonger from New York with an occasional warbling falsetto. As seen on Jools Holland. Sound familiar? This one is special. Proper special. Of his ‘Rejoicing In The Hands’ lp out back in May on XL we said “Banhart is a complete antidote to all the consumer focus groups or hit-writers, too scared to tamper with the formula. He has stumbled upon a personal Eureka that says there're no laws governing what can be written about in song except self-imposed ones and he's taken that to his heart, and in Technicolor.”

The Shins
Carling stage
Friday Reading (9.35pm) / Saturday Leeds (9.05pm)
American indie at this year's finest. Heartbreakingly good songs that sound like Paul Simon thrashing at an electric guitar. But a lot less sucky. Our reviewer said of their sophomore album 'Chutes too Narrow': "the album is a glorious, 30-minute mini-pop-epic; a blanket of buried hooks and handclaps, cheap synths, thrift-store strings and stiff-lipped la-de-da's."

Agent Blue
Carling stage
Saturday Reading (1.30pm) / Sunday Leeds (1.30pm)
Rioutous quintet who're setting themselves up to release their debut album. Of their majestic second single, we wrote: "'Sex, Drugs & Rocks Through Your Window' is made by a bunch of teens and sounds like Eddie Cochran on Future Drugs. It chugs, it wails, it gurns and it's utterly irrepressibly brilliant. " Also Londoners can catch them at a post-Reading DiS show next Thursday, September 2nd @ 93feet East.

Fiery Furnaces Radio 1 Stage
Sunday Reading (1.45pm) / Friday Leeds (1.40pm)
Having released their bewitching debut record last year, the Chicago brother and sister waste no time in preparing to release their second effort in a fortnight's time. Seeing them play live last year, DiS uttered the words: "Putting inevitable American Blues-Duo comparisons to one side, The Fiery Furnaces have found a skewed sound they can most definitely call their own. Intense, playful and inventive, this band is simply great."

Do Me Bad Things
Carling Stage
Friday Reading (1.15 - 1.45) / Saturday Leeds (12.45 - 1.15)
Another band from the Must Destroy stable, which brought us the Darkness and GLC. Of their debut EP DiS said: “The man Tremendous Mike (obe) has once again discovered the band that we all want. There will be no surprise here; this will of course explode. Magazines will have to fit nine bad things on their covers; radio will have to cram nine bad things into their recording booths; TV should be fine - plenty of space. This is special.”

DiScuss: Who d'you wanna see? Who you looking forward to seeing?