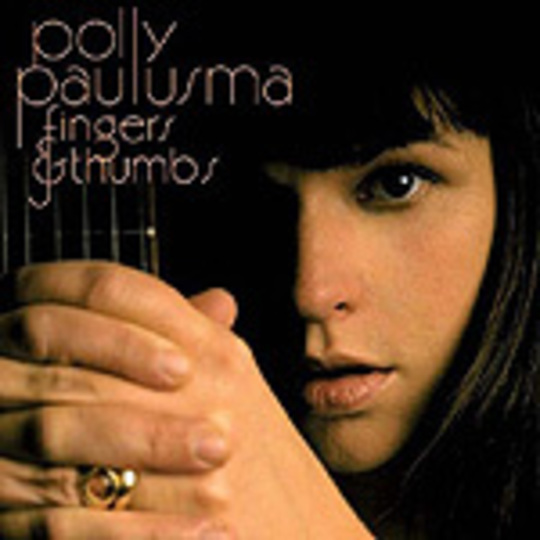 Fingers & Thumbs is about miscarriage and facing up to grim reality, about coping with loss and having to start again, and ultimately about hope. Dedicated to the child that Polly Paulusma was eventually blessed with, Fingers & Thumbs is a very personal record, which is probably why I feel guilty that I haven’t really taken to it.

The follow-up to 2004’s Scissors In My Pocket, Paulusma’s second long-player sees her adopt a different approach to the first, the acoustic guitar banished to a corner in favour of something a little more electric. As if to drive the point home, opener ‘Godgrudge’ is surely her loudest offering yet; a solid body of indie-based pop building to a noisy crescendo, her folk roots almost undetectable, and just to assure us the electric approach can also be used for the tender parts too, ‘Where I’m Coming From’ drops the tempo down almost immediately, adds an organ to the mix and throws Paulusma’s voice to centre-stage for a three-beat tale of temptation.

An observation on the voice of Polly Paulusma: it plays the parts of both heroine and villain throughout the course of Fingers & Thumbs. When the songs are quiet and the vocals tender, there is a breathy, faintly-husky quality about Paulusma’s vocals, the kind normally associated with Cat Power only with a higher, almost coquettish register; yet on some occasions this same quality fails to materialise and songs like ‘All The Time’ – the seven-minute duration of which outstays its welcome by roughly three – and ‘Back To The Start’ become more like coffee-house background music or, even worse, sound as if they could be the soundtrack to some coffee shop scene in Neighbours.

Heck, someone who walked in on me listening to the super-smooth, closing piano ballad ‘Matilda’ even accused me of being a Katie Melua fan, and it’s not hard to see why – a decent portion of the album is similarly constructed, on the outside at least. Prod a little deeper though, and actually listen to the words, and on occasion it can be a more appealing prospect as the lyrics show a sinister side; ‘Ready Or Not’ especially is dark in its conveyance of the dread of sex with someone you don’t love, hinting at mental anguish and torture, rounded off with “if I told you where it’s hurting, you’d beat me deaf and dumb”.

But however you dress it up, there's just not enough about Fingers & Thumbs that stands out. In making the step up/down/back/forward from acoustic to electric, it's robbed of a lot of the things which could have made it special. The tender songs aren't really that tender by the time you've added a few layers of instruments, and so the songs which began so emotional seem to have been stripped of this quality by the final cut, leaving Fingers & Thumbs falling painfully short of its true potential.