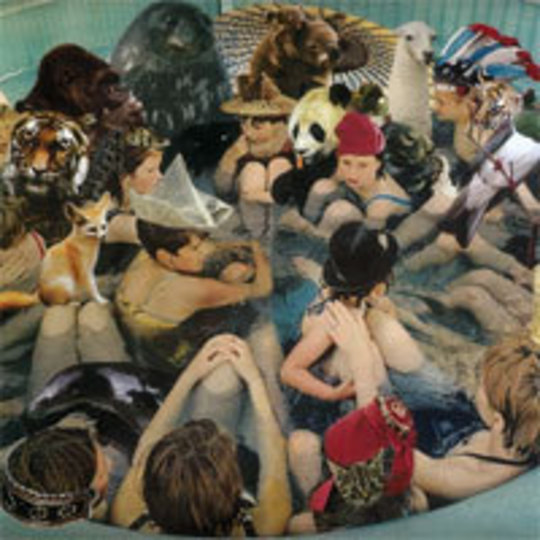 How? That’s the question Person Pitch asks. It’s a broad question, and with it comes the looking towards distant rolling hills and thinking you could probably climb them. Then, when you’re climbing them and you’re near the top, looking back down and seeing that it was kind of really far. These hills, though, they’re all different colours; everything’s incredibly vibrant. You can see a long way from here.

It’s staggering that* Panda Bear *is a real person. Noah Lennox, also of Animal Collective, is fucking ambitious. These psychedelic hymns and schizophrenic nursery rhymes sound unreal, otherworldly. It’s strange, then, that it all makes so much sense; that it sounds so human, so real and in touch. The title of_ Person Pitch _is apt. It sounds like the work of one hundred men, but at the same time just the efforts of one.

Person Pitch opens with a revised version of the title track from the old Comfy In Nautica EP. It’s a summation of what’s to come, and of Panda Bear’s sound and ethos: it’s an inspired sound, hopeful, joyous and multifaceted. ‘I’m Not’ (the flipside from said EP) is here too, later in the album; it’s right at home in such ethereal surroundings. This is a record that sets out to do lots of things.

Next, ‘Take Pills’ eases from his slower, signature blissed-out chants into buoyant and, somehow, danceable beat-driven material. Animal Collective has always been about tribal-style beats, propelling their pop along riotously and always blissfully, and here it works perfectly, with numerous styles mingling. Lennox tries out lots of genres with all the fervor and excitement of hearing them for the first time, and it’s just so seamless! It can be background music and at the same time the most engaging thing you’ve ever heard.

‘Good Girl/Carrots’ is over 12 minutes long and begins with tribal drums and screaming and Young Prayer/Animal Collective-style chanting before chilling out. Lennox’s vocals are serene, his lyrics abstracted and echoing underneath textural found-sounds and piano loops. It’s incredibly enchanting. Then loops fade, textures subside and a transition takes place… into dub! It’s completely unexpected, and Lennox chants on: “And all I want to do is take it easy”. Wind-chimes resonate against this echo-ridden backdrop; birds chirp and Fennesz-esque ambience floats from the speakers as the track changes into ‘Search for Delicious’. It’s transcendent.

‘Bros’ you might’ve heard before – it’s been released as a single. It’s freaky and distant and the 12 minutes it spans, in mesmerizing fashion, speed by. It could either be one great big serene lullaby or an extended dance mix.

Person Pitch has an extreme amount of production; lots of layers and a lot of manipulation. It’s all masterful: the vocation that must have gone into making this is audible, but it all sounds so effortless. Animal Collective’s beats are tribal and infectious; they mine something instinctive. Here, Panda Bear builds upon those ideas in a new tangent, one very much his own. His is an incredible voice, booming and strident.