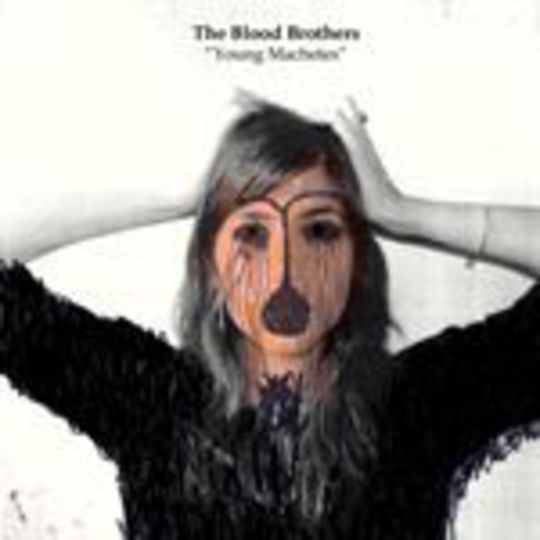 Never ones to play by anyone else’s book – unless said others are the select few very-underground punk acts that the discerningly rocking DiS reader might be aware of – Seattle’s Blood Brothers have peppered their career with songs that splutter like water pipes full of air pockets, that riff and wobble like see-sawing kids on razorblades, that ripple and flex like Mr Universe competitions where the only permitted contestants are three-limbed Paralympians already so heavily gold-medalled that their onstage walk is a hunchbacked hobble.

Young Machetes is as full of violent vitality as its title implies, of brutal beauty beyond the stagnant hardcore crowd: the Brothers lurch from one second of lecherous loquaciousness to the next riding rollicking drums that even the most thunderous storms would cower from; they stride from song to song with a directness, an insatiable thirst for malevolent mischief, that is more impressive than anything the quintet have previously committed to disc. Young Machetes is quite evidently the band’s finest long-player to date, the successful blending of their formative teenage angst, their vivid imaginations and their penchant for everything aurally extreme.

The record’s opening trio set the senses ablaze with no salvation visible through the cloud-climbing flames that burn bright blue before the listener’s mind’s eye – ‘We Ride Skeletal Lightning’ features the album’s finest showpiece, a descending bass climax that just gets better with each and every listen, but it’s opener ‘Set Fire To The Face On Fire’ and third salvo of scintillating bleedin’ keys and screamin’ chords ‘Laser Life’ that make the deepest impact. The former grinds and yelps and writhes before breaking down into a Parliament-funky organ monster, while the latter’s prioritisation of Brother Johnny’s keyboard gifts it a dancefloor accessibility rarely heard on preceding collections. Still rocks your face off faster than a Formula 1 racer gets you to the coroner’s shop, mind.

‘1, 2, 3, 4 Guitars’ confounds expectations by opening in Defacto-esque dub style – it’s one of many songs here that expose many layers of depth given repeat visitations and absolute attention. That’s one of the key pluses of Young Machetes: its makers’ maturity hasn’t led to a mellowing, but rather a tendency to clutter the corners of each song with headphone-revealing peripheral sounds, tiny facets that peek out from behind the squall of cats trapped in car doors and grindcore bands left out in the rain too long. Lyrics are never fully grasped – half-heard words combine to construct a sense of meaning from scattered ambiguity, but never is a song’s purpose vocalised in any single-minded fashion. The creativity evident in the band’s music has forever spilled over onto their lyric sheet; Young Machetes differs not in this respect.

Although the album’s tone is serious – for all the high-pitched chatter, suggestions of political overtones are discernable, and there’s almost a semblance of inter-band conflict that bubbles through speaker cones, conjuring the fear that perhaps this is the outfit’s final curtain – star-bright smiles are sure to spread across audience faces come the airing of ‘Huge Gold AK-47’. Like it’s title suggests, there’s clearly a straight-faced disposition or two informing the song, but its delivery is hyperactively clamorous enough to ensure that dancing feet are motivated as much as any grey matter. Brother Jordan excels in his ringmaster role when the hat’s handed his way, and this song is his standout showcase.

To some long-termers Young Machetes will be received in a similar manner to its older sibling Crimes; that album, too, incorporated keyboard melodies and solidified compositional structures within what was formerly a lot of noise at times. Crimes is unfairly regarded in some quarters as a regressive step for the band, a tumbling from a path best followed, but in fresh hindsight it was an essential release that enabled Blood Brothers to make Young Machetes. It’s proved to be a vital stepping stone, a bridge between stylistic focuses. This is Crimes refined, sculpted so that its edges aren’t as jagged as many sound-clashes past have proved to be; it exhibits managed eccentricity enough to stoke the furnaces of intelligent, demand-more punks worldwide.

Blood Brothers have never even seen the rails with their own eyes; currently, they’re so far wide of them that not even the crossing of two-dozen horizons, over sea and through valley and traversing the fires of Hell itself, would bring them together.