Four On The Floor 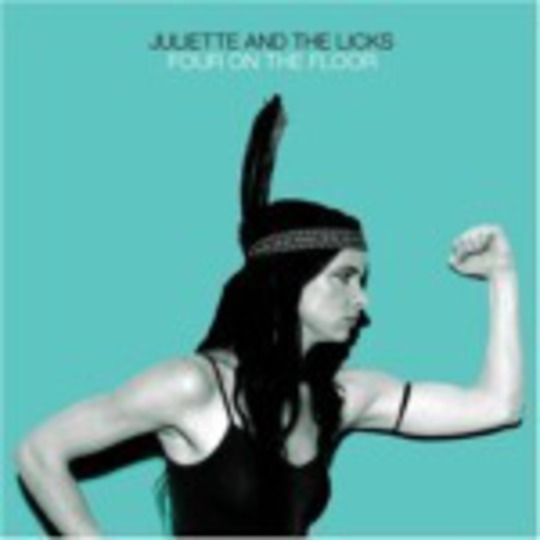 Seemingly tall tales follow *Juliette Lewis *around. Stories of the former actress crowdsurfing down the middle of an aeroplane seem too far-fetched, like they could only have come from folklore. Yet you want to believe them because you’ve seen what she can do.

You’ve more likely seen her stealing the show as the thumb-sucking teen in Cape Fear, but if you’re lucky or savvy enough you will have seen her live show. There are very few newcomers upon whom the label of Rock Star could be quite so aptly applied.

Sadly, her debut release contained approximately zero actual songs - despite the severe energy and excitement that the record exuded, a band is nothing without a helping of well-writen songs. Luckily, *Juliette Lewis And The Licks *have given their all on at least a couple of their songs, providing them with the rock chops to match her onstage exuberance.

Lead single _‘Hot Kiss’ _is a catchy, foot-stomping southern-tinged rock song - while Dave Grohl’s drumming is the best thing about it, and the probably the best thing about the album, if you’re quite happy with mindless, meaningless rock music then this will do you absolutely perfectly.

There are some syrupy good vocals on ‘Sticky Honey’ _with Lewis chattering sweetly away into her microphone against a nicely jagged tune - the aspects complement each other perfectly. More of this and _Four On The Floor would be okay. Unfortunately, _‘Killer’ _starts with some punk-rock promise but soon becomes tedious and repetitive; after that, the record just plods along. _‘Mind Full Of Daggers’ _is the same. Despite some lovely driving melodies from Lewis and more thunderous drumming, it peters out into an empty nothing of a song.

This record is ridiculously top-heavy, with two of the three songs of any resounding note coming within the first four tracks; the rest struggles to finish the album off with mid-tempo, sub-standard balls-just-hanging-there rock.

You’d like to think that rock 'n' roll brings with it a sense of a good time, or at least a healthy catharsis, but there is a sense of neither here. While Ms Lewis may have semi-retired from Hollywood, after listening to _Four On The Floor _you may be inclined to advise her on going back to the day job.