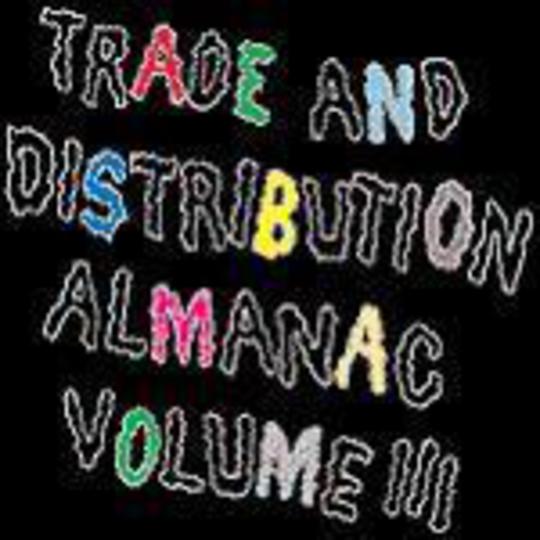 Let it be known, before your correspondent starts hurling a myriad of recently-fabricated musical tags at you, that there is no more ridiculous genre name than Intelligent Dance Music. For a start, it’s treated like an oxymoron in most quarters, even though having enough of The Funk to make a considerable number of people shake their collective thang must require some sort of grey matter for rhythmical understanding in the first place. But also, as proven by how most of output from the mighty Adaadat label is treated as IDM, it often sounds like the product of drinking too many Panda Pops and playing on the Gameboy until your eyeballs bleed, rather than reading Chomsky or doing the cryptic crossword. And, if you tried dancing to anything on Trade And Distribution Almanac Volume 3, their latest in a row of indispensable roster round-ups, then you’d probably look like an upside-down pneumatic drill and feel run over once the whole thing shudders to a halt. But by lordy, this is so brilliant it'd be worth it.

Just to prove how utterly ace this little lot is, procedures are kicked off by boy wonder du jour en ce qui concerne LOLcore Germlin, whose frantic ‘Yeah!!! as usual makes its excuses and leaves way shy of the two minute mark but in that time it creates the sort of glitch-laden square-eared nine-step sherbet-dipped sonic art attack that makes your whole body throb with sheer delight. That the other 54 minutes of this compilation make him sound like a Teletubby idly tapping on a xylophone proves just how relentlessly ’core the whole thing is. It’s ’core to the…uh…core. Ove Naxx barges in with a twitching breed of dancehallcore that mashes into place untamed breaks, barking dogs, neighing horses, firing artillery and the sound of The Bug fleeing in terror. Then there’s the 52 second appearance from Cutting Pink With Knives who, in terms of futuristic atmospheric grindcore assaults would have Trencher and The Locust both cupping their balls, and immediately after there’s the fantastically-monikered Miklós ‘The Accountant’ Kemecsi who manages to stay spiky amongst the rapid squelchcore noises in ‘Squirrel Staring At A Beetle’. Eight minutes in and it’s already pissing over most label retrospectives this side of Trade And Distribution Almanac Volume 2.

But overall there’s not really anything here that doesn’t spasm with some sort of furious day-glo magic, which isn’t surprising considering the line-up present. There’s Doddodo, who skewers some poor banjo riff into submission with pounding beats and sirens and then tries to plug a nursery rhyme into the mains. There’s DJ Top Gear who drags UK garage into some sort of sordid swamp and, despite an almost heroically shite (and possibly piss-taking) freestyle brag about how well-endowed he happens to be, it manages to work. There’s Acrnym, who makes the same noises as Super Mario does when he collects all those golden coins, and there’s DJ 100000000 who sounds like they’ve just made their lawnmower explode by chucking it in the bath. In contrast to all the uncompromising racket that’s going on around them, Ommm’s ‘Feather Touch Logic Control’ makes you feel like you’re being tickled under the ear lobes by Nathan Fake or The Orb, whilst the collaboration between Hrvatski and Nintendo-bothering wizard DJ Scotch Egg is in essence four minutes of distortion, but it’s four of the best minutes of distortion that money can buy. Add to that list the most uncompromising of the lot, Yaporigami, plus Duracell, Horatio Pollard, Romvelope, Yoko Oh No!…if that’s the sort of line-up that by the magnificence of even the names themselves doesn’t turn you on then, baby, you ain’t got no big red buttons.

Phew, Adaadat have come up trumps again. Like sticking eggs in the washing machine or painting everything you own bright pink, this may not be intelligent but it is_ big and it _is clever. And about seven hundred and forty three times as much fun. You try faulting it anywhere…