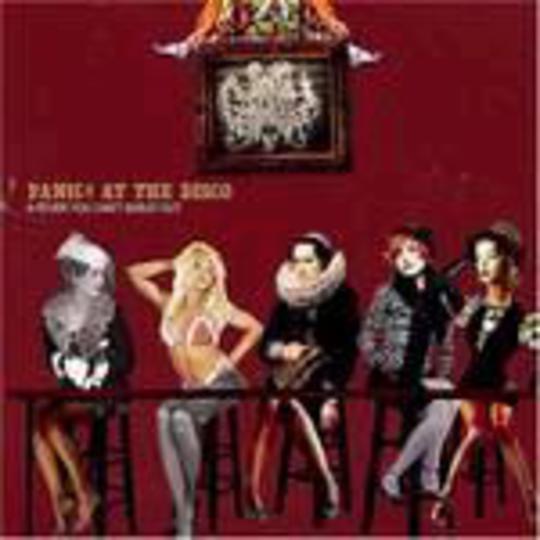 It’s so easy to poke fingers and fun toward the young – full of spunk and spirit but content to use their talents to further the cause of spiky emo-pop, rather than invest time studying the much-maligned genre’s roots and the bands that have inadvertently led to this MTV saturation. Nobody can turn on any music television channel today without encountering a floppy-haired and studded belt-wearing kid rocking fashionably noir threads emblazoned with the name of either their best mates’ band or a slightly more obscure outfit. Scene points attained, sales growing, frustration among those that have followed these acts’ forefathers to their ultimate demise at the hands of so many pretenders peaking and boiling the fuck over.

Panic! At The Disco’s back story reads like the stuff of rock and roll fantasy – they struck lucky when a member of another absurdly popular (but considerably more bland) emo-pop band heard them online and immediately reached for his chequebook, bolstered by newly acquired major label dollars. Thus, we have A Fever You Can’t Sweat Out, a debut album so polished that it’s almost impossible to believe that it isn’t the new product of some shady industry svengali, previously responsible for a slew of kiddie-pop boybands. After all, that’s precisely what most of these emo-pop bands are: boybands for the guitar-loving Noughties.

What Panic! At The Disco have done, and cleverly, is steer clear of the carbon-copy format of their peers’ records – each of these tracks sounds remarkably creative within the narrow channels of the stream they’ve chosen to sail down. There are beats lifted straight from The Faint’s glitch-riddled hyperactive synth-punk and hooks the size of the boot of Italy delivered in perfect alignment; scenester-baiting lyrics and critic-bashing put-downs are combined with oddly Eighties echoes and chimes (listen to the ridiculously titled ‘Lying Is The Most Fun A Girl Can Have Without Taking Her Clothes Off’ and try not to think of Depeche Mode). Of course, it’s as perfectly contrived as you could imagine, as wonderfully clichéd as the exclamation mark of their name, but damn, these are good songs. Good emo-pop songs. Great pop songs, period.

Without delving too deeply into vocalist Brendon Urie’s wholly muddled lyrics – 365 days of diary scribblings too wildly haphazard in subject matters to warrant deep study, with occasionally fetching choruses delivered in almost falsetto fashion – Panic! At The Disco’s strengths lie in their frantic compositions, unrelenting in their relative invention, however successful the results. The album’s ‘Intermission’ sounds like the techno outburst from Refused’s The Shape Of Punk To Come for crying out loud: it’s just not what’s expected considering the nature of this regularly annoying, major label-suckling mutant of a genre. If you can overlook the sales pitch, the heavily styled looks and this band’s smiling assistance in the deterioration of a scene (if you like) that was once so worthy of entering without fear of your little Sugababe sister following you, then there’s much enjoyment to be had across these thirteen tracks.

Of course, if you’ve already made your mind up and are utterly ignorant of progress, however painful it may feel, then that’s your prerogative. You’re welcome to it – for once these ears are siding, slightly, with what’s been the enemy for these past five-or-so years.