The Ballad Of Chasey Lain 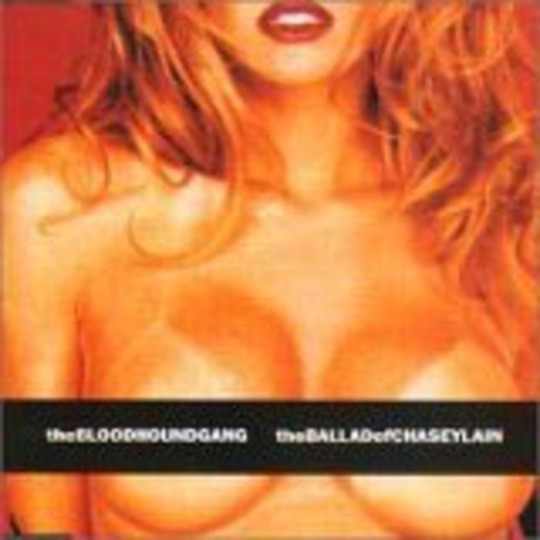 This is a letter to enthuse my problem with your music. Lines such as “would you fuck me for blow?” and “I must demand you let me eat your ass” make me feel like being sick. What do you think of women? Are they merely objects to you? I just wonder what you’d say if this song was about your mother, as I’m sure you are all mummy’s boys. Actually, I bet you idolise Beavis+Butthead and Johnny Bravo! Losers! Get back to singing about the roof being on fire or something sad like that!

Hmmmm, I guess that sorta thing has been written at some point by some women with a big feminist streak. Ok, so I can see the point but most of the time The Bloodhound Gang are trying to make music to make us giggle. Should we really laugh about the pleasures experienced by people talking about oral sex.

Undoubtley for anyone young enough, living at home, this will make your parents frown. And if you’re not old to know about the birds and the bee’s they’ll probably end up going into your local record store demanding some censorship and shouting irrately about the affect this could have on their sweet innocent child (although, they'd never go as far as complaining to the labels for releasing it). I remember the same thing happening with the Outthere Brothers when I was about 10, I got the single and loved the way they swore and described ‘dirty’ things. Which was fair enough back then. I was easily sucked in by stuff like that, once and even now it makes me laugh to hear stuff like this, knowing a few years ago I'd be blowing snot all over my school uniform without a care in the world. I’d hope there are only a few people who’d take this as seriously as the above letter but I bet a whole bunch of women nostrils will be flaring to this "filthy" little ditty.

If you are, or were, a spotty little kid who used to snigger at words such as: tits, boobies, sex or talk of a 'mass debate'; then this is your bag. If not, put yourself inside that mind state and laugh at the childhood dumb innocence of this – bare in mind the Bloodhound Gang are just a little bit older than that, but praps not mentally. I can't see any other reason why this record would of been released, let alone left the Bloodhound Gang practice room if it was intended to be a serious peice of contemporary music.

On this single, there is a remix of the single – which sounds a little like a Jason Nevins mix (how imaginative!). Plus a track called ‘Mope’ with two mixes, one which features tons of cheesy samples, including a bizarre bit where Pacman talks about drugs. The other mix is by The Pet Shop Boys (heroes of the ‘gangs) and it sounds like any other PSB track, except with less annoying, I-want-to-be-a-women, vocals and more of the same school boy wit from the Bloodhounds.

The last good day of the year