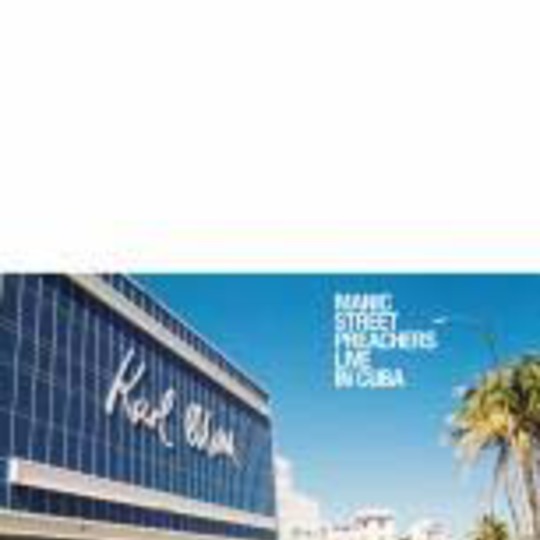 “LOUDER THAN WAR” they proclaim. But this, the third Manics longform video (a now near annual event for a tie-in live concert video) sees another fawning attempt to selfmythologise. Gasp! As James busks with Cuban stret musicians. Swoon! As Sean speaks. Yawn! As Nicky looks out over the Cuban sea.

I love The Manics, and on paper this seems a great idea, but frankly this is a cheap and shoddy DVD. Good thing I bought it second hand for £10 less than your favourite corporate high street monster. Even though it proclaims a running time of 202 minutes it’s hardly value packed. For way too much money you get :

This is all well and good, but the interesting stuff from Cuban TV is either poorly recorded off an awful signal (with ghosting and flickering all over the place), or deliberately degraded to look as if it is bootleg footage. Its not something you’d want to watch more than twice unless you were recording the audio track onto CD.

There’s a 58 minute ‘live highlights’ precis of the Cuban Gig, well shot, well edited, but the performance seems flat, the Manics a little bit subdued – after all, Nicky was ordered not to wear his traditional dress by the repressed, hypocritical Communist regime, choosing instead to stay quiet, question nothing, go along with the show. Shut up. Be happy. It does a almost Leninist revision of history – brushing swiftly over the fact that here are some millionaire rock stars slumming it for publicity in a repressive regime, the downside of which is hinted at only through atmospheric shots of a poverty stricken country. And to see them fawning over Fidel Castro as if he is some kind of personification of Communism leaves a sour taste in my mouth. I thought it was a cheap and tacky stunt then, and I still do now.

In traditional Manics fashion as well, much like those tasteless foam Manics hands on sale at the Cardiff New Years Eve gig, it looks as if every member of the audience was handed a nice little Cuban flag to wave during the gig.

On top of this the other DVD extra features are just as underwhelming. Every menu is slow, and features an endless irritating loop that jars after the second use, let alone the 40th. The DVD-Rom links don’t work. The Discography is shockingly inaccurate – apparently “La Tristesse Durera” was released in October 92 on vinyl only with “You Love Us” (live) on the flip. And three interviews on the disc can’t be accessed by the menu, only through clicking a complicated set of commands at set points during the documentaries themselves.

In short – if you like the Manics, this is an unessential addition to their portfolio, you can live without it. If you’re a casual fan, or a completist who wants to pay full price for it - avoid.