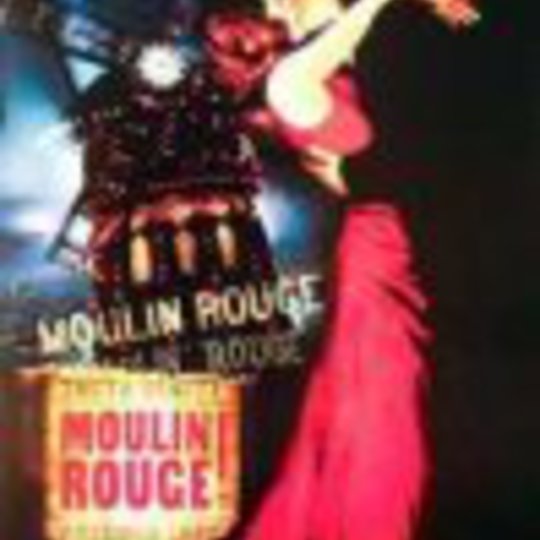 For Aussie director Baz Luhurmann it seems that too much is never enough. Moulin Rouge is the third of his ’Red Curtain’ trilogy of films which began with ’Strictly Ballroom’ and continued with ’Romeo + Juliet’. The three movies, each becoming more colourful, dazzling and audacious than the last, with the curtains falling on the most outrageous and extravagant of the three. Moulin Rouge is set at the turn of a twentieth century Paris that has been re-imagined through a filter of 1940s Busby Berkley musicals, 1920s cinematographs and pink champagne, a decidedly hyper-real and glitzy wonderland of Luhurmann’s giddy imaginings. The story begins when a penniless English writer named Christian (Ewan McGregor) arrives in Paris with a desire to live the romantic ideal as a bohemian in Montemartre.

Soon enough, due to a bizarre unconscious Argentinean crashing through the ceiling related incident, Christian falls in with an acting troupe led by the diminutive Toulouse-Lautrec (John Leguizamo). After impressing them with making up the song ’The Hills Are Alive’ on the spot, he is asked to write their musical ‘Spectacular! Spectacular!‘ (the best name for anything ever, and a rather apt name for the movie itself). For Christian, it’s a dream come true “On my first day in Paris” he writes “I moved in with the children of the revolution: bohemian artists who believed in Freedom, Beauty, Truth and above all things: Love”. It also turns out they also believe in having a bit of a knees up, as a bewildered Christian is soon whisked off to the pulsating epicentre of decadent abandon: The Moulin Rouge, the “kingdom of night-time pleasures”, a club filled with cancan dancers, acrobats and top hatted gents all awash with absinthe. It’s here the film explodes into vivid Technicolor, the screen crammed edge to edge with light and glitter and colour and sound.

Central to all this is Nicole Kidman’s character Satine, a glamorous courtesan and the club’s big, bright, shining star. She sings ‘Diamonds Are a Girl’s Best Friend‘, the audience of gents sing ‘Smells Like Teen Spirit‘ (no, really), and Christian - and us - can barely believe his eyes as the whole whirling, swirling, exploding jukebox mania enfolds before him.

But Satine has her eyes on him. Falsely thinking that he’s the duke who has promised the clubs owner, Zidler (Jim Broadbent), to fund the club in exchange for Satine’s services, she invites Christian back to her boudoir - situated in an elephant shaped building - for a bit of ohh-la-la. Daft old sap that he is, he thinks she’s only interested in his word play and turns up ready to recite his poetry to her. A right old French farce ensues, as the pair talk cross purposes before the [real] dastardly duke turns up at the door, cue much hiding behind curtains, suspicious looks and hurried explanations.

Soon enough, the duke (Richard Roxburgh) is placated, but Satine has found that she has fallen in love with the hapless Christian. From here on in the story revolves around their affair, taking place under the comedy-villain nose of the duke while they write and rehearse the musical. Probably unwisely, the play mirrors their situation being about a poor sitar player who has an affair with the wife of a wealthy, but stuffy maharajah.

When, inevitably, the duke discovers the pair’s shenanigans he warns Zidler that if he doesn’t have the girl to himself, the boy will die and the club will be closed down.

Not only that but Satine has developed a rather nasty cough - and any film goer will know what that means.

If you think the story is cliched, well, that’s the point. If you think it is a case of style over content, well, hello, it’s style _is_ its content. If you’re looking for a story that’s all content and no style - read a book. Moulin Rouge is purely and simply a cinematic spectacle, a film to remind us why cinemas were invented, and in Baz Luhrmann cinema has a master stylist.

For, in a summer where dead-eyed. corporate, soulless, production-line ‘blockbusters’ have been paraded before us, from the numbingly boring, bomb that didn’t go bang of ‘Pearl Harbor and the lumbering behemoth that was the appalling ‘Jurassic Park III‘ to the silly monkey business of ‘Planet of the Apes‘, we have been ‘treated’ to what must be the worst summer of films on record. Every one an over-hyped dud of the worst order, tired, insulting failure has followed tired, insulting failure. ‘Moulin Rouge‘ over-turns all that. Luhrmann has tipped up treasure chests and dressing-up boxes and has fashioned a remarkable, unique-looking movie where the central message is: “the greatest lesson we have to learn, is to love and be loved in return.” and not, for once ‘here’s a CGI explosion! And here’s another! And another!’

What’s more, clearly a pop music obsessive (sorry, lover), Luhrmann has his characters converse using, mostly, pop-song lyrics, everything from ‘Your Song’ to ‘Nature Boy’ are raided to create dialogue. It should never work but Baz, through guts, gumption and sheer panache, manages to pull it off with tremendous style.

It’s not always so successful however, the ‘Roxanne‘ Latin-flavoured dance routine quickly outstays its welcome and the ‘Like a Virgin‘ duet between Zidler and the duke is a bit much really. No matter, such anomalies are soon forgotten as is our cynicism after it becomes buried under a mountain of sequins and glitter while our groans turn to giggles as we succumb to ’Moulin Rouge’s highly stylised and idealised world.

Kidman is superb throughout, Ewan McGregor’s singing turns out to be not as bad as I’d feared, but it’s Luhrmann who deserves the lions share of the bouquets for holding together this courageous, outrageous folly against the odds when it could so easily have slumped into being a gaudy, embarrassing song and dance show.

Instead, from the shimmering, champagne-rush of the opening dance number to the eventual staging of ’Spectacular! Spectacular!’ - an eye-popping Bollywood extravaganza, it turns out - ’Moulin Rouge’ dares to be different in a movie climate gasping for a breath of fresh air under suffocating formulism. It’s heartfelt romanticism bursts with music and light, to leave you to wander out onto the street, dazed and amazed with a grin the size of a cinema screen.