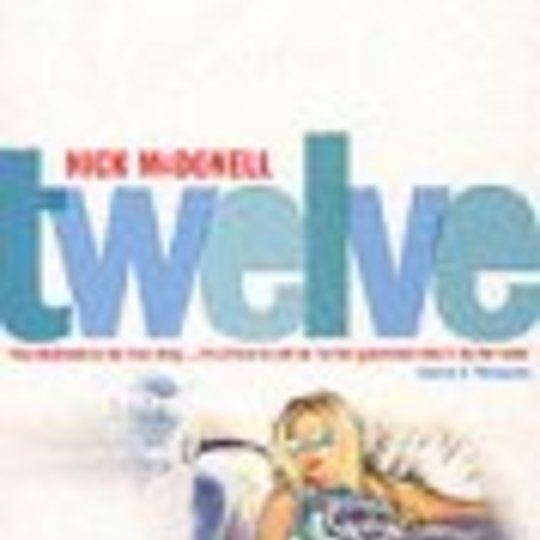 Hmm….when you read a book you want to be hit between the eyes. You want your heart to race and feel your fingers itch to turn the page. Sometimes, if its really good you have to stop yourself from flipping to the back to see what’s going to happen cos you just can’t wait. But with this book it was different. I liked it. That’s a pretty passive word I know but there isn’t another that I can use. I read it quickly, the language was good and the humour entertaining enough. But there was something missing.

Set in New York the action takes place two days after Christmas (the year isn’t stated), and the lead up to a New Years eve party like no other. The story revolves around a group of teens, some intelligent and beautiful, some dumb and aimless, who are all interlinked in someway. Mainly by a seventeen year old drug dealer called ‘White Mike’, who supplies all his overly wealthy peers with their drugs of choice. It is designer drug ‘Twelve’ which brings all the characters together for the final and apparently shocking moments of the book.

Germaine Grear and the like banged on about it being a master piece and the book of MY generation. The cover has a quote from Hunter S. Thompson stating that Nick McDonell is the real thing….I’m afraid he will do for his generation what I did for mine.

Now, in my mind, that’s a pretty big statement to make. How can anyone really write about their so called generation? But most importantly WHO is MY* generation? Generation Y? And where are all the heroes? The role model fuck ups who have pretty films made about them screwing up their lives yet still coming out OK. But the problem is WE are not OK. And I’m not sure we ever will be as *Y generation was screwed even before it came out of the test tube.

Twelve subconciuosly makes reference to the Columbine massacre. Over here in Blighty, we scoffed at the aftermath of puritanical morons mouthing off about it all being the fault of music (this time the record wasn’t being played backwards), and we made jokes about how those kids probably just took the guns from their parents arsenal in the basement. It could only happen in America. But sinister things have been happening here too. Two young boys brutally tortured and murdered a child of three years old. Another group of youths left one of their school friends bleeding to death. A gang of teenagers, including one girl, held down a woman in her thirties and raped her, each standing back and waiting their turn. This is hardcore, this is my youth.

But still reading Twelve I wasn’t shocked. Many of the kids feautured were too faceless to care about. But what is it that has made so many void of personality or redeeming qualities. In Twelve’s case it is the fact that many of them have money thrown at them by their rich parents, just so that they don’t have to bother occupying them or really even considering them. Each characters story is as desolate and tragic as the next. And these kids don’t know any better. They almost don’t have any other option than to play people for what they can get out of them. But is that still reason enough for all the tragedies that keep occurring around my generation?

In the past young people started revolutions. They stood up and changed the world by causing people to notice them and think. Music and culture has always been about youth. But now everything is based around money and quick fixes. No one is stirring up the music world with the same kind of passion as dare I say it, our parents generation. Who are the seminal movie makers of the world now? Who is inspiring change? Come on please put up your hands, do a silly dance, shout at the top of your lungs. No I can’t hear you and that is the problem. People are trying to be noticed they do it with violence almost in the same way a child in a large family has to scream louder than the others to be heard.

Its hard to say whether I liked Twelve. It does sum up a group of people in an entertaining way, but maybe I’m just too part of the wasted youth to really see it and appreciate it. Maybe the forty something intellectuals on TV have it right, that this is the book of *MY* generation.

Maybe she deserves to die, she thinks. maybe someone ought to kill her. Pop. Easy. Shot in the head and then everyone bullshits a eulogy and the parents cry, right, because she was such a lovely girl. Pop pop, someone comes into school and pulls the trigger. And then they’re on television and Jessica lies bleeding and people sit transfixed in front of the television watching it all unfold on CNN.

The only thing that I really gained from it was the realisation that really I just don’t care. Everything in the world is so soaked in pop culture that none of it seems real any more. Planes flying into buildings really does look like a scene from a movie. And I don’t know if I care if two lonely kids wonder into their school and open fire, just cos maybe they were bored, they didn’t get to fuck a cheerleader at prom, they didn’t get enough hugs when they were small. That probably makes me a bad person, but hey maybe its just my age or my g-g-generation.