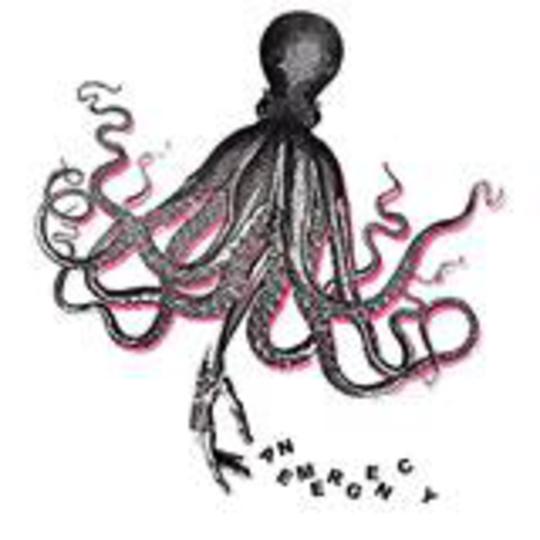 The last letters in the world that I want to write, right now, are the 17th and 21st of the total 26. You know the ones – ideal for imbecilic text speak but hardly common in conventional literature. Well, less so than the more common vowels and consonants, anyway. Sorry, what is this again? Countdown? Balls to it: An Emergency sound like Q And Not U.

Which is no bad thing, really; since the DC-based frazzle-punk deities did their whole indefinite hiatus thing – okay, so they just broke up, but I live with perennial optimism – ears like mine have been lurching from toilet den to stinking squat hoping for something as wonderfully adrift of punk convention as the music crafted by the Power (and more) masters. An Emergency come from the slightly cooler (we're talking temperatures, maaan) ‘hotbed’ of uprising punk protagonists, Exeter, but their second longish-playing effort (nine tracks in not so many minutes) is utterly in tune with the outpourings of America’s finest left-of-centre guitar mincers. There’s no sing/scream dynamics here – it’s sing a bit, squeal a lot, twitch wildly and freak the fuck out ‘til the cows come home to roost. Yup, that bizarre.

Only, it’s not that bizarre: rewind a little to that first paragraph and you’ll see what I mean. Much of We Are The Octagonists treads paths close to straight-up imitation of influences, rather than demonstrating the trio’s ability to put a new spin on an established template. No doubt ears elsewhere will find their minimal distortion and manic shrieks directly comparable with the daddies of this entire sub-division of another quasi-genre, At The Drive-In. No doubt their co-ordinating fingers and thumbs will feel it necessary to highlight An Emergency’s debt to their forefathers. No doubt their words will be wasted, absorbed only by those embittered by the shape of punk today.

Yet more open-minded fellows among you – the punk-loving public frequenting these calmer waters – need take heed of my words to come: An Emergency, while never absolutely unique of sound across these nine tracks, are the fresh-of-face future - domestically, at least - of a scene swimming slowly towards irrelevance, saturated by the twin evils of pop sensibilities and integrity-testing pay packets. They have the energy and spirit within them to write a truly classic album, that much is evident here on songs like ‘Irony Nein Danke’ and ‘Paper Tiger’, and We Are The Octagonists is a great career curtain-rasier. (Of course, this is their second release, but their first on a label with decent distribution.) Now they tread that middle ground between dark and light, pitching post-punk riffs common in more prevalent chart-bothering acts almost of this ilk against skewed absurdities straight from the depths of the underground. In the near future they will rectify their own shortcomings, already ironed into smooth, easily manageable and non-malignant gripes of only minor severity, and make an album for us lost and of unfounded fear to treasure as we do our Different Damage.

File this alongside this year's finest from Bullet Union and This Aint Vegas. Then form a Q, wait patiently, and make sure U’re paying attention when An Emergency deliver a bombshell of an album proper.

Editors, We Are Scientists, The Cloud Room at Zodiac / Academy 2, Oxford, Sat 08 Oct