Goal!: Music From The Motion Picture 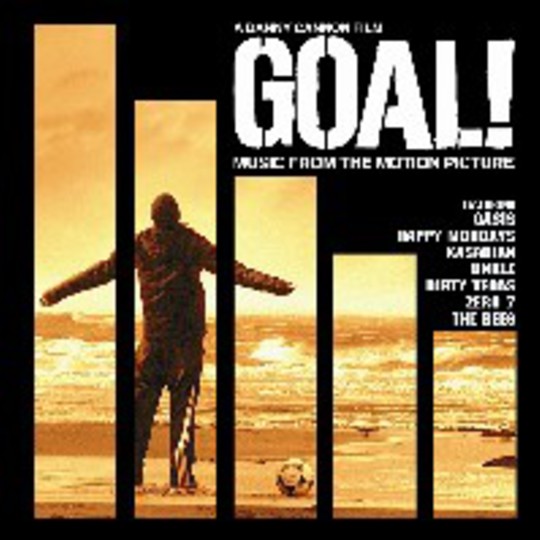 When Harry Enfield and Paul Whitehouse created Julio Geordio, little did they know that the character would form the main body of a cinematic trilogy a decade later.

Alright, so 'Goal!' isn't a parody about the fact far too many below standard foreign footballers have beseeched the beautiful game in search of coin and coc...you know where I'm coming from. Instead, it tells the story of a young Mexican immigrant who dreams of being a professional footballer and eventually signs for Newcastle United. The second part of the trilogy sees him head out to Spain and Real Madrid and the final part is set to be filmed during the 2006 World Cup.

As for the soundtrack, well it doesn't differ from most compilations of accompanying music really, in that you've got one or two big hitters (Oasis, Kasabian) contributing alongside several pieces of incidental score music which outside of the context of the actual film make very little sense, while the likes of Zero 7 and Dirty Vegas were born to do this kind of thing.

Undoubtedly the biggest selling point though, is the inclusion of three previously unreleased Oasis tracks, and particularly the unheard-anywhere-else-before 'Who Put The Weight Of The World On My Shoulders?', where Noel Gallagher takes the lead vocal in a song that starts off all melancholic like a stoned 'Half The World Away' before a full orchestra kicks in to lift it out of the doldrums and up there with the dizzy heights of 'Whatever' and 'Stop Crying Your Heart Out'. The UNKLE Beachhead mix of 'Cast No Shadow' adds solid beats in all the right places to one of '(What's The Story) Morning Glory''s more poignant moments, while the Dave Sardy mix of 'Morning Glory' itself, sounds largely like a patchy demo and really should have been left on the cutting room floor.

Other highlights on 'Goal!' include the long awaited Happy Mondays comeback of 'Playground Superstar', which combine a binful of dirt-ridden basslines and slick soulful rhythms with Shaun Ryder's unmistakeable northern drawl that, whilst not quite being up there with 'Wrote For Luck' or 'Kinky Afro', should ensure its creator is stocked up with enough TennentsSuper and Benson & Hedges until Christmas at least.

The real stand-out on here though, is the colossal 'Will You Smile Again For Me' by ...And You Will Know Us By The Trail Of Dead, which grows and grows like a ten-year-old being forcefed supersized buckets of KFC every day for a month, letting out a tumultuous roar at the end that sends the Gallaghers, Meighans et al running for cover in some dark Mancunian alleyway.

As soundtracks go, 'Goal!' (thankfully) won't stand as a terse reminder of its era such as 'Saturday Night Fever' or 'Grease', but at the same time, is an interesting appetiser for Danny Cannon's most high profile big screen moment to date.

Spend an Evening with Saddle Creek

Blood: The Natural Lubricant (An Apocalyptic Adventure Beyond Sodom And Gomorr