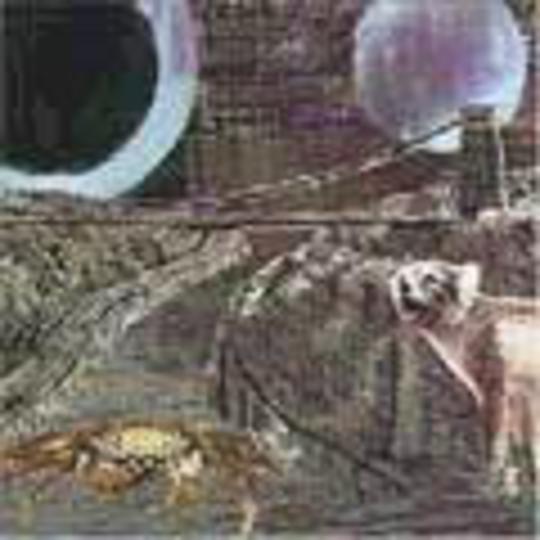 Pleasant but not entirely expected surprises of this week, numbers one to three:

*1:* My girlfriend’s new haircut makes her look like a foxy Bond girl; all that’s missing is a white bikini.

*2: *Meeting radio's Mister Lamacq and discovering that he’s still just like you or I, albeit with a penchant for cider whereas we’re ale men, obviously. Then drinking some of the latter brew…

3: *…only to discover, subsequently, that *Deerhoof’s new EP is quite the hangover cure.

If I wasn’t so pathetically sensible under these layers of alleged weird (which I blame upon a deep insecurity during social interaction – when I play the fool it’s ‘cause I don’t want to, if that makes sense?), I’d write this entire piece in capitals. It’s perhaps the only obvious way to translate via words on a page the deliriously insane cookie-crumb sweet experimental pop the ‘Hoof conjure. IN CAPITALS IT MIGHT MAKE SENSE, but it looks silly, yeah? Yeah.

So: ‘Come See The Duck’ opens, Satomi sings in English for the only time on this seven-track offering, things go clattering and crashing from a mountain of gin-soaked marshmallows into a river of molten Milky Ways. I say ‘sings’; you know she does anything but half of the time: yap yap yap yap y’self into a frenzy, gal. And do a disco twirl while y’r at it. Sweeter than a life spent daydreaming cartoon fantasies on a steady diet of dandelion and burdock, and equally bonkers.

Then: well, not immediately then, but nevertheless. ‘Spiral Golden Town’ is the mist-lifter, the moment of clarity where a fuzzy befuddled head is upturned shaken and stirred into life on the top deck of a bus bound for Absurdsville, population: four San Franners found beating each other with magic wands and flicking frogs like bogies at pedestrians minding their own CAPITAL LETTERED bizzzzniz.

And then it’s multiple choice'd reactions, one_ two_ three:

*1: *Do I press the buzzer and get off this ride to someplace I don’t wanna be, instead hitchin’ myself an adventure with these crazies?

*2: *Do I slump’n’slouch lower into this moulded plastic seat in the hope of passing my stop altogether and thus not having to endure an everyday stint at the office without such candied alt-pop tomfoolery to cover me? Or…

*3: *…do I buy the bikini myself? Reckon she’d wear it? Do a dance to De’hoof? Play pin the tail on the donkey derby on some Dorset beach instead of wageslaving away 'til the next payday?

I swear (and I fuckin' do), threeways are an I-can’t-decide-with-a-coin-toss bitch. Thus, I’ll just go my own way; probably for the best, ‘cause I’m not certain even Deerhoof know where they’re headed anymore.