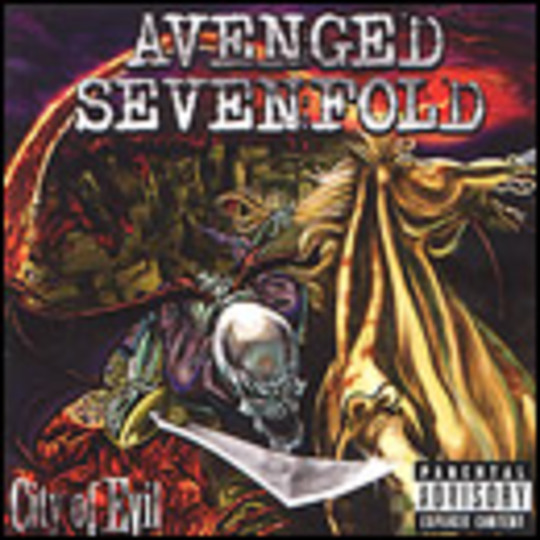 OhmyfuckingGAWD: metal. Seriously, looking at that cover I was all like "Oh boy is this ever gonna suck a fat scenemo schlong", but I am _so_ wrong.

Seriously, they've a song called 'Bat Country' that sounds like Mr Bungle playing it straight-fucking-edge, with bonus harmonies straight out of a kiddie Hanson record. Like, seriously. It then goes all MOR like Boston, or something, before the drums go absolutely berserk all over again. There's another called 'Blinded In Chains' that does kinda the same thing, but harder, coming on like The Star Spangled Banner shredded and incinerated by a legion of skull-headed power axemen.

Of course, it's all polished to the extent where the none-more-black is pretty translucent, but who cares dude - this got riffs. Riffs the size of supercharged monster trucks, each one crushing horizon-to-horizon-sized cities of cartoon super heroes and Japanese mutated monsters. The lyrics are toss ('though no more so than, say, Three Inches Of Blood), granted, but giveafuck.

Apart from, like, all those pussy acoustic parts. I mean, dudes, that is so VH1. And fade-outs suck, too - you've got to the end of a six-minute anthem and the only idea left is to turn the metal down? SUCK, dude, SUCK.

*_Dear customer: if you are over the age of 14 then you may disagree with these statements. Sorry, dude, but you got old. Go buy yourself some Jem or something, granddad. _