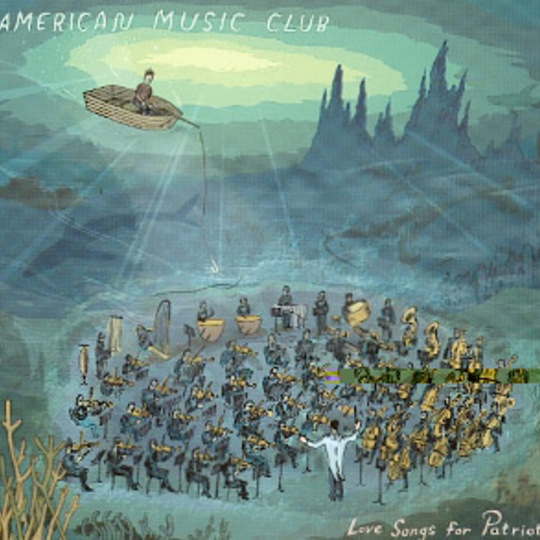 The thought of going back to something that was so awesomely special ten years ago can be a scary prospect.

Will the sex god from college be found cowering under the weight of a dodgy moustache, caring more for durable cardis than duration? Or perhaps the local Garden of Eden that witnessed the dawn of your carnal knowledge will be unrecognisable under a shopping trolley graveyard? Worse still, will the band who were link-boys guiding you through perilous, unsettling but ultimately rewarding voyages still be able to hack it, or have they gone the way of the embarrassing dancing dad?

After just a few plays, I am exhilarated and so* relieved to find that _'Love Songs For Patriots'_ is filled with everything I always loved about this band. *Mark Eitzel's lyrics are still breathtakingly crafted and time after time, the odd line jumps out that's as illuminating as it is damned well clever. The only thing that's happened to Eitzel during his solo years is that he has honed and improved what was already wonderful.

American Music Club were never Eitzel's personal backing band and collectively they are much more than a bunch of old friends giving it another bash. These guys invisibly sense the needs of each other within the skeleton of a song, and hearing Vudi back where he belongs, somewhere in the shadows cranking out the weirdest strains from his guitar, is only one proof of this. Danny Pearson's bass and b.vox likewise, are so warm and perceptive and the drive of Tim Mooney's drums, along with Marc Capelle's keyboards round off their unique sound.

Last time around, easy sobriquets like "King of Sadcore," trailed after Eitzel. Of course, he has never been afraid to spill guts, most usually his own, but this time there's a tangible sense of hope twinned with a delicate measure of thankfulness within his songs. But fear not, AMC have not gone all limp on us - quite the reverse actually. The gritty realisms of life, death and disappointment are still to be found gripping their reserved seats at the top table, but instead of warming himself in suffering, Eitzel manifests the whole picture.

After a great love has gone, learn to rejoice in the fact you have known them and they have left good things with you.

Example: _'Only Love Can Set You Free'

It's time to move on and "proclaim your joy". Eitzel soars on the breeze with "I've been **so** lucky".

The album is not all about coming to terms with Eitzel's past as he has more than a passing axe to grind with the US administration too.

'Ladies And Gentlemen' and 'Patriot's Heart' are scathing in their indictment of Bush although the former title is not a call not to arms, but for all to make a personal effort to shine.

It's an enduring mystery why AMC never attained the lofty heights of "next big thing" in their first incarnation, with every new album receiving devotion across broad sections of the UK music press. Big thing? Even "average sized thing" would have meant noticeably increased record sales and more radio play, the general lack of which has been lazily attributed over the years to the "depressing" content of Eitzel's output. A more honest explanation has to do with his discomforting knack of getting closer to the bone than a streetwise butcher's dog.

'Mercury' from 1993 is widely regarded as AMC's finest moment, albeit their flawed masterpiece. This new album is right up there with it, and 1990's 'Everclear', too, but after ten years apart preceded by twelve years together, 'Love Songs For Patriots' shows that at long last, the Greatest Living Songwriter and this incredible band have finally grown into their skins.