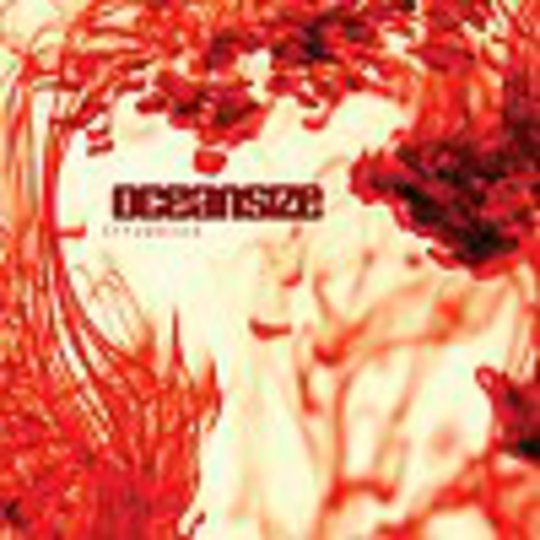 There is no prologue to this record. I have but a handful of EPs and live viewings to compare this opus to. Despite my experiences of *Oceansize *dating back a year and a half yonder and considering all my prior hyperbole and superlative, this full-length album still held revelations within. There is a delicateness of restraint that has allowed them to stretch the sound over the entirety of the disc. I daresay there is not a spare second of space left on this record.

Encompassing their entire career to date, *Oceansize *have included songs from as long ago as 1999. Despite this seeming as if they are unable to have thought of anything new, it is quite the contrary. They do not need to put their most recent material on this record as the elder songs sound as fresh as the younger.

I have spoken of their splendour and majesty before but here new realms of exquisite execution are entered. Having developed their songs in both rehearsal and in their live sessions they have allowed their mantras to emerge as magnificent editions of grandiose, swirling pity in ‘Amputee’, and sublimely dignified catharsis, lying amid masses of controlled distortion with ‘Catalyst’. The distinctly Tool-esque placid prog-metal of ‘You Wish’ can not go unnoticed as a certain propensity for soothing, then mauling, comes to the fore.

Displaying an uncommon diversity within the record, *Oceansize *take a foray into the pseudo-electronic with previous single, ‘One Day All This Could Be Yours’ and as a band never have hesitated in cosseting themselves with epic battles of instrumental proportions. Indeed finishing the record with a lilting, soaring trio of 8-minute marathons may seem a little self-indulgent to the non prog-enthusiasts but to the rest of us, it almost seems like our wildest dreams translated into sound - if that is not too disparaging a description.

It is all too rare a sight for a band to truly love their instruments. We all jest of “guitar wankery” during those 3-minute hair solos but the true wanking of a guitar is a beautiful, beautiful thing. To watch a man lovingly caress the neck and feel his fingers flicking over familiar frets, and then to stroke the strings as if he were a swan gathering her cygnets, just to hammer away at their skulls like the unknown predator just seconds later.

Seeing this in the flesh, so to speak, is one thing but for this imagery to be expelled from a five inch plastic disc through wires and air is a much more unnerving and compelling experience. Oceansize’s self-disciplined control and moderation has allowed the music to flourish into a glorious masterpiece. A masterpiece that you will fall in love with.