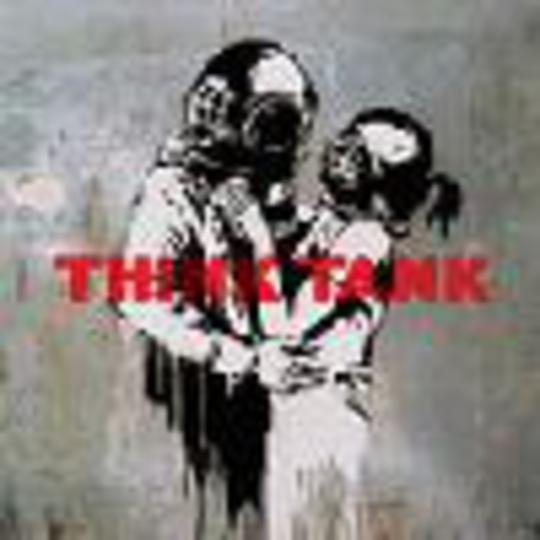 If the genius of a guitarist is really measured in what they don’t play, then 'Think Tank' is **Graham Coxon’s greatest work. After all the high profile fall outs (Albarn**’s hair, and lifelong pal Graham have both departed), the band’s seventh LP is a genuine pleasure to behold.

It’s taken them a while to achieve it, but where 'Blur' and '13' were full of jump-start arrangements and fractured experimentalism, much of 'Think Tank' is lush in melody, flowing in windswept electronica with a myriad of bombastic orchestral backing one minute, before retracting into cocoons of melancholic and clustered acoustics the next.

Gorillaz has seemingly expelled most of Albarn’s desire to create simple, instant radio-pop, and thankfully 'Think Tank' is cheese free. There’s a clutch of wistfully confessional heartbreakers which bleed the same beauty as such favourites as ‘Bettlebum’ and ‘This Is A Low’. New single ‘Out Of Time’ is content to swoon around the string-laiden waves of its own longing beauty, but only reveals its full worth after repeated visits.

They haven’t dispelled with guitars all together though. 'Think Tank'’s nod to MTV2 and the American market comes in the shape of ‘Crazy Beat’, (the album’s ‘Song 2’) and ‘We’ve Got A File On You’, a throwaway re-hash of ‘B.L.U.R.E.M.I.’.

Alex James and Dave Rowntree step out of their shadows as being solely ‘the fanciable one’ and ‘the alcoholic’ respectively with the classy funk moments of ‘Brothers And Sisters’ and hypnotic tribalism of ‘Moroccan Peoples Revolutionary Bowls Club’. The inevitable stench of Damon going through his Mali photo album doesn’t prove as gagging as Graham obviously found it.

When Coxon does finally appear, it’s on the mesmerising piano led finale ‘Battery In Your Leg’. The cosmic feedback of the dearly departed’s whirring guitars are a blissful complement to Damon’s vocals which you feel could crack at any moment.

A ballad that sounds like the old Blur playing something off 'OK Computer': it’s a tear-jerking conclusion that feels like a heart gently freezing and crumbling beyond the stars.

'Think Tank'’s greatest asset, aside of its ability to move you with its mature beauty, is Blur’s natural progression. An organic and emotional ride, it may show label mates Radiohead that you don’t necessarily need to try so hard to move on from your heyday and keep your appeal.