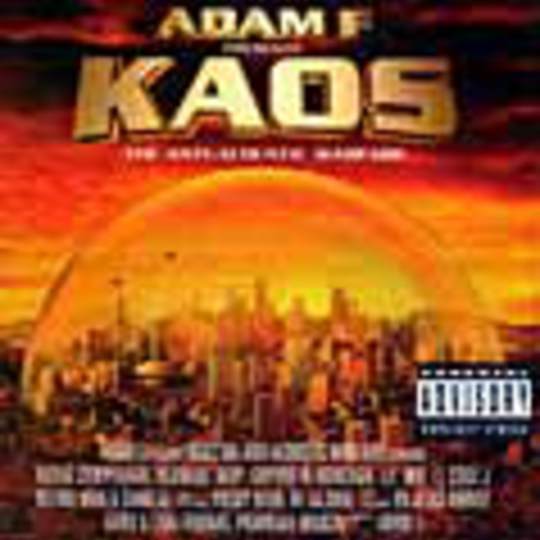 A concept album, a journey that leads you through twists and turns, swinging from full throttle boombastic rhyming to choppy R&B to crooning rap balladeering, 'Kaos' marks drum'n' bass artist Adam F's first foray into the world of hip hop, and on the strength of this, he's going to make a great big fat meteoric crater of an impression on it.

Sometimes resembling a kind of hiphop 'War of The Worlds', this album is worth listening to from beginning to end… and then doing it again…and again….I find myself caning it in the same way as I did with Queens of The Stone Age and Linkin Park.

….Not that it's not worth occasionally skipping straight into the thick of it… I have a personal soft spot for 'Time 4 Da True', the De La Soul/DV Alias Khryst track, and for 'Stand Clear', the M.O.P. track, but fact is, I could have as easily skipped to the kicking R&B of Lil'Mo singing 'Where's My…' or to LL Cool J spitting out rhymes on 'Greatest of All Time'… you see…it's ALL good!

Where the big guns in US hip hop have moved in a pack toward the super-clean hard and fat sounds best represented by Dre, Adam F offers a curveball, a dirty chaotic in-your-face record that at moments threatens you eat you alive with explosive over-the-top wordplay…

…and I'm glad that at last we have someone from this country who, instead of limply chasing the tails of the Americans, is instead setting his own agenda and his own fashion, for it can only make hip hop a richer place. I don't know if I agree with LL Cool J that he's going to be the next Dr Dre, but I certainly think he has a strong enough take on hip hop to be able to provide a powerhouse alternative to that g-funk sound.

All in all, an awesome debut.