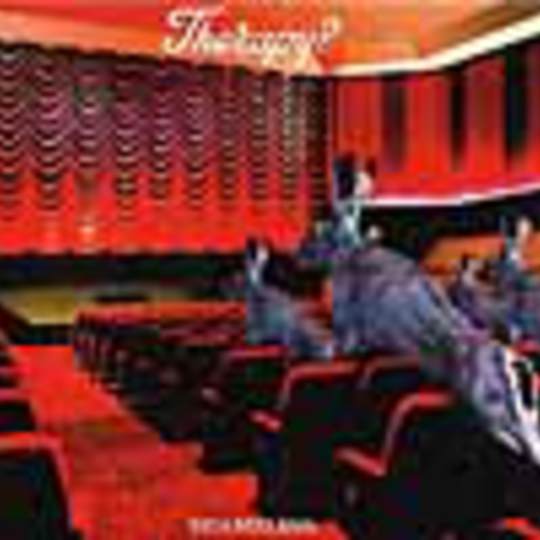 Ready to rock muthafuckers? Got your cardboard axes at the ready? Ready for duelling twin guitar solos? Right then, synchronise headbanging in 5…4…3..2..1…

This is the way Therapy? would like it to be. Tongue in cheek, revelling in the mighty fun of pisstake metal. Much like a great many of the newer, more popular bands that appeals to the KIDS: Less Than Jake’s “All My Best Friends Are Metalheads”, Sum 41’s sub-Motley Pussycat NWOBHM homage of “Pain For Pleasure”. However, these bands truly realise the absurdity of metal.

Therapy? On the other hand seem to take it seriously. They’ve been knocking around for years, and are, on occasion, one of the best British bands around. The debut “Pleasure Death” and “Babyteeth” saw them in an unholy mix between Big Black and Ministry, creating a behemoth of noise that was truly the closest to organic industrial I can imagine, all spiky and unkempt; and far in excess of the fact they were only a three piece. By the time “Nurse” came round they were showing a pop edge, and when “Troublegum” appeared they singlehanded invented the Britrock scene that spawned Terrorivison, Bush, 3 Colours Red, and Feeder, perfecting the art of pop songs with loud guitars and teenage angst to a tee. Then, with “Infernal Love” (to me their finest moment), they experimented a bit, and pissed off a lot of fans in the process.

As if harking back to glory days. “Shameless” is, for the first few songs, one of the finest britrock albums ever made. Its got “MTV2 heavy rotation” written all over it. “Gimme Back My Brain” is a song that stands up with their finest moments ever ; and then “Dance” makes it even better.

But, beware, before you know, its hair metal time. “Woah woah” starts the third track. It’s a warning for what will follow: “I Am The Money” seems to redeem the album. Then comes “Wicked Man” – which is surely the worst song Therapy? have ever recorded, and possibly the worst song I’ve heard all year. Andy Cairns sings in faux-pas country style, and when the lyrics include “My wife is a robot, my baby's cot is a heavy-metal parking lot”, you know it can't get much worse.

You hope so at any rate, but then it does get worse. The lyrics for “Endless Psychology” include; _ “Painted on your daddy's arm, wasted in your mummy's car, You're sixteen and you feel so lonely, signing up for some Commie army”_

Oh Jesus. And you thought that was bad? Wait until he starts talking about “tree people.” And the Rocket From The Crypt-esque track "Joey" gets even worse. Starting with the cry “gentleman, start your axes”. its goes into a drag racing fetish that sinks even lower than that very cliché. When he sings... "I said, "this is either Jesus, aliens or cops It was neither, it was Joey Dunlop” its cringetime. It tries to be rockabilly, but is just closer to a rocking chair.

Therapy? were a brilliant band once. But their fixation with the camp, kitsch aspects of heavy metal seems to have overtaken them. Any band who lists their main influences as Judas Priest, Exodus (specifically “Bonded by Blood” era), and Saxon… have either got their tongue in their cheeks, or mean it. Therapy? On the other hand, used to mean something more than all those bands combined. Now all they mean is Thin Lizzy-esque double guitar harmonies (favourite of Iron Maiden, and worryingly, Papa Roach), songs that start with the Bon Jovi-esque choruses of “Woah Woah”), lyrics so infantile and puerile they make the Ramones look like Steven Hawking, and all the worst metal cliches under the Sun – only they mean it, maaaan. Gentleman, start your axes indeed.

There’s some excellent and very rock production by Jack (Soundgarden, Nirvana) Encino here; however, its totally unsuited to the band. Unfortunately, the only thing shameless about this album is that’s its too damn metal for its own good. At any second, I half expect the band to break into Saxons “747 (Wheels of Steel)” or tygers of pan tang songs. That’s never a good sign. It might be half calculated commercial move, half harking back to their metal roots, but if nothing else its dumbed down lyrics and obsession with 80’s metal guitar solo’s does the band a greater injustice than I imagined possible. . It reminds me of the Pet Shop Boys track of the same name "Shameless", when Neil Tennant starts talking about "we will do anything to obtain our 15 minutes of fame". This album will more likely bring them 15 minutes of shame.

I wish this was an album that truly could make this band into the mainstream again, now that its gone full circle and everyone loves loud guitars again. However, this poor, perfunctory effort will do the band more harm that good. File under “90’s indie/metal superstars try to resurrect 80’s metal cliches in a poor, unconvincing manner that’s really making me rather listen to Limp Bizkit instead, its that bad”. Its painful to listen too, if only for the fact it’ll be compared to classics of their past and found to be a shallow, pale photocopy by a band that’s but a shadow of its former self.