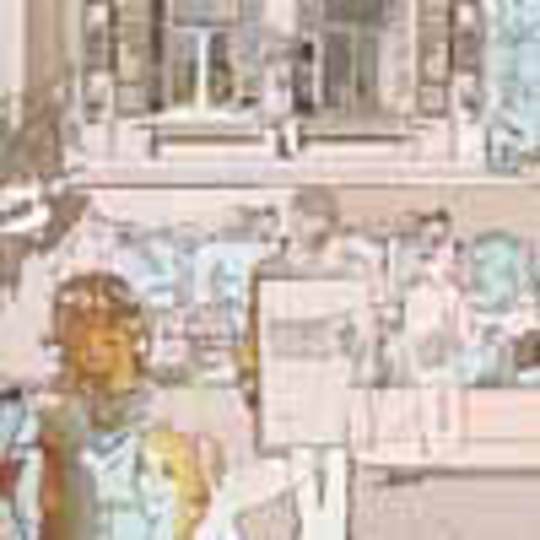 Named after the security hut at the entrance to Virgin Records, the owners of the label, Hut Recordings has enjoyed remarkable success throughout a decade, which proved frighteningly tough for many independent record labels. Despite its ownership by Virgin, Hut remains an independant label as it is distributed by Rough Trade, and 10 years on the label still have the passion of an independent label, which is coupled with the muscle of a major corporation.

So Hut have decided to celebrate their 10 years of existence with a compliation, chronicling their past and celebrating the future of the label with three new bands recently signed to Hut.

The Smashing Pumpkins open the record with **I Am One from their debut album ’Gish’ which was one of the very first to be released by Hut. It’s a stunning, rousing opener and one which you can clearly see the potential in the band which went on to become one of the biggest bands in the world. Hut were off to a great start with that one. David Gray slows the tempo (and the quality) down with one of his early tracks, before we hear from the lesser-known The Auteurs.

The standout track is predictably from The Verve. Signed by Hut in 1992 they never gained the recognision they deserved until the classic ’Urban Hymns’ was released in 1997. ’History’ is the track chosen for this compilation and you can hear clearly the best band of the decade playing at their full potential. By the time The Verve released this as a single they were indeed history having split up due to the tension between vocalist Richard Ashcroft and lead guitarist Nick McCabe. They reformed of course and became the biggest band in the world before splitting again (for the same reason). This will be seen as the signature tune to Hut Recordings. Never bettered and never will be neither. Ashcroft himself makes an appearance later with a track from his No.1 solo album ’Alone With Everybody’.

Placebo (Nancy Boy), Embrace (All You Good Good People) and Gomez (Whippin’ Piccadilly) later provide a trilogy of classics Hut have produced, and it makes it easy to forget that Hut doesn’t just mean the Pumpkins and The Verve.

And the compilation ends with 3 tracks from 3 recently signed bands to Hut. The first from Crackout is a blistering track called ’Mr. Rabies’, sounding evidently like a more powerful Idlewild. The next is from The Burn who offer a slower paced, melodic tune from their demo ’Facing The Music’, and have yet to make their recording debut.

The record finishes in some style. Hut have provide us with many great bands for the past 10 years and judging by this band in particular they will continue to do so for some time. The band is of course The Music. You must have heard of them now from their much hyped debut single ’Take The Long Road And Walk It’, which is featured here, despite being released by Fierce Panda just over a month ago. Mixing the arrogance and loose feel of The Stone Roses with the psychedelia of early-Verve recordings The Music create a sound which is almost unique, but more importantly, much needed in the stale state of guitar music at the present time.

Excellent in patches but yet average in others, definitely worth buying if you don’t already own many of the tracks, but WHY did they put David Gray on it?